Some of the simplified rules for federal aid could get complicated. 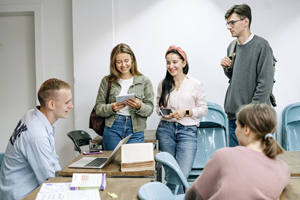 Big changes are coming to college financial aid for the 2024â2025 academic year, and while that sounds like it’s pretty far off in the future, the chief factor that will determine what a family will be expected to pay starts with their income earned in 2022. So if you have a child who is in their first year of college today, the new rules will affect the financing of their senior year, and then the process will cascade to younger children as they apply.

The updates are part of a simplification to the Free Application for Federal Student Aid (FAFSA) that Congress tucked into the omnibus Coronavirus Response and Relief Supplemental Appropriations Act of 2021, and then deadlines were updated by the Department of Education.

Generally, the new FAFSA relies more heavily on the applicant’s parental tax return, and thus significantly reduces the number of questions asked from more than 100 to fewer than 40. For low-income applicants who are eligible for a maximum Pell Grant, the process may be even easier because they may automatically get granted a contribution of at least zero, and that number can now be negative, up to â$1,500.

Another switch is that the bottom-line calculation of what a family can afford to pay (aside from merit aid and other private scholarships) will be called the “student aid index” rather than the “expected family contribution,” even though the number essentially refers to the same thing.

Just because the form might take less time to complete, doesn’t necessarily mean it will be less complicated. Details are still being worked out on many of the provisions because they need clarification from the Department of Education. Also note that these changes only apply to the FAFSA for federal aid, and some colleges also require what’s known as the CSS Profile, which has not announced any changes and follows a different set of standards.

Still, even at this early stage, the new rules may lead some families to change their saving strategy and recalculate how much they can afford to pay for college. Among those most affected:

Families With Children Overlapping In College

There’s good news and bad news about the changes to the rules for how the new FAFSA will work for families who have children who overlap in college.

The good news is that there’s an increase coming to the income protection allowance by about 20%, meaning that more of parents’ income will be shielded from the aid calculation. But the bad news is that the FAFSA will no longer divide the amount of the family’s bottom-line contribution number by the number of children in the family.

“When you combine all the changes, for low-income families, the loss of the division is offset by the other changes, but for middle- and high-income families, there will be an increase in the cost of college,” says Mark Kantrowitz , a college aid expert and author of many books, including How to Appeal for More College Financial Aid.

There has long been a caution sign for anyone other than parents putting money aside for a child in 529 college savings plans, despite being a popular option. At Fidelity, grandparent accounts make up about 16% of 529 accounts, amounting to over $4 billion in assets.

While you never had to report a grandparent-owned 529 on the FAFSA, any money used from it was reported as untaxed student income, and thus weighed as heavily as 50% on the aid bottom line. That made many families chose to use grandparent college savings only in the final years of college when the FAFSA wasn’t an issue because the aid forms capture income from 2 years before.

The simplified FAFSA will no longer ask about these funds. “Grandparents and other family members will have more of a green light to help with college without impacting aid,” says Mike Rusinak, a director of Fidelity’s Financial Solutions group.

Divorce can be complicated, and the FAFSA never made it any easier. Now the new rules change how parents decide which one fills out the forms, switching it from the parent who had the most custody to the parent who pays the most in support.

Tying more of the aid formula to tax returns also is difficult, because divorced families may make agreements to either alternate years of claiming children as dependents or split the dependent deduction if they have more than one child.

Still another hitch: Divorced parents may not have legal agreements detailing who pays what for college. So while one parent may pay the most for support, that parent might not necessarily agree to fill out the FAFSA forms.

“Until they start trying to implement these changes, there may be issues that come up that cause the Department of Education to go back to Congress, and say, this particular aspect will be problematic, you might want to change it,” says Kantrowitz.

How will these new FAFSA rules affect your family? Keep an eye out for clarifications from the Department of Education, for a start. Also, you can figure your college cost forecast under the current rules by using this FAFSA calculator, and then estimate how the changes would impact your specific situation. You may also want to work with a financial professional to come up with an overall strategy for your long-term college savings, as every dollar you save for college is one that you don’t have to borrow.