Report: There are 114% More Women-Owned Businesses in the U.S. Than 20 Years Ago 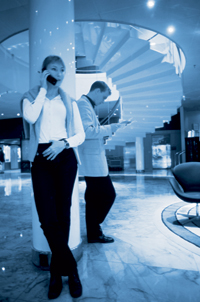 November 15, 2017 —Â NEW YORK–(BUSINESS WIRE)–The number of businesses owned by women in the U.S. has more than doubled in twenty years, as has their revenue, according to the annual State of Women-Owned Businesses report, commissioned by American Express OPEN. Women are starting an average of 849 new businesses per day, up 3% from last year.

There are 11.6 million women-owned businesses, employing nearly 9 million people and generating more than $1.7 trillion in revenue. The report is based on U.S. Census Bureau data adjusted by Gross Domestic Product data each year.

âWe’re encouraged to see the amount of female-owned businesses in the U.S. has more than doubled in twenty years,â said Susan Sobbott, President of American Express Global Commercial Payments. âChampioning women-owned businesses strengthens our economy, individual communities and helps inspire the next generation of female entrepreneurs.â

Significant growth in firms owned by women of color

For the last twenty years, women of color have turned to entrepreneurship at an astounding rate. While the number of women-owned businesses grew 114% from 1997 to 2017, firms owned by women of color grew at more than four times that rate (467%). In addition, the 5.4 million businesses owned by minority women make up almost half of all women-owned firms (46%). These businesses employ more than two million workers and generate $361 billion in annual revenue.

The huge gain in the number of women-owned businesses and their revenue growth has not been matched by employment growth, particularly after the Great Recession.

The report estimates that if revenues generated by minority, women-owned firms matched those currently generated by other women-owned businesses, they would add $1.1 trillion in revenues and 3.8 million new jobs to the U.S. economy.

While states with large populations like California, Florida, Texas, New York and Georgia have the most women-owned business, many rural states are proving that they are a force to be reckoned with when it comes to their growth rates of women-owned businesses.

This report examined economic clout, which in addition to growth in the number of firms, includes growth in employment and revenues. The top five states (including the District of Columbia) where women-owned businesses most increased their economic clout between 1997 and 2017 are:

The top metropolitan areas where women-owned businesses increased their economic clout from 2002 to 20171 are:

Notably, the five states showing the highest employment vitality – a measure of employment growth rate from 1997 to 2017 and average number of employees at women-owned firms – tend to be rural. In ranked order, they are:

In the past year, the growth rate in the number of women-owned firms increased the most for these three industries: construction (15%), arts, entertainment & recreation (12%) and other services (12%).

A majority of women-owned businesses can be found in three industries:

Methodology
The 2017 State of Women-Owned Businesses Report, commissioned by American Express OPEN, is based on data from the United States Census Bureau Survey of Business Owners (SBO), which is conducted every five years in years ending in 2 and 7. Data from the 1997 and 2012 Census surveys were collated, analyzed and extrapolated forward to 2017, factoring in relative changes in Gross Domestic Product (GDP) not only nationally but also at industry, state and metropolitan statistical area levels. All GDP data were obtained from the Bureau of Economic Analysis (bea.gov) â another bureau, like the Census Bureau, within the U.S. Department of Commerce.

Specifically, growth in GDP from 2002 to 2012 ($10.8 to $16 trillion) was compared to that from 2012 to the fourth quarter of 2016 ($16 to $18.7 trillion). Relative annual growth rates were then used to estimate the growth in the number of firms over the 2012 to 2017 period â thus adjusting a straight-line extrapolation to account for relative economic growth between the two time periods. This was done not only at the national level, but also by applying actual gross state, metro area and industry-level output figures (which were available up to the fourth quarter of 2016).