Donât look now, but this economy is here to stay

Following up on its seminal study of the emerging Gig Economy, titled The Gig Economy Is Here To Stay, Legal & General has now published 2022 U.S. Gig Economy study: Part 2 , where it further defines and delineates the scope of this new work-phenomenon, which represents represents a vast range of industries and fields. Excerpts are presented below. Access the full report here. 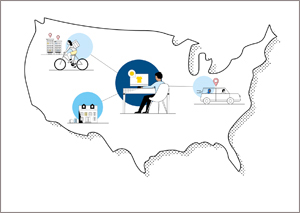 Weâve been talking about the changing nature of work in Americaâin particular, the explosion of the gig economy, notably that 36 percent of the population make a living this wayâand what this means for workers, employers, and society as a whole. In Part 1 of Legal & Generalâs comprehensive study on the U.S. Gig Economy, The Gig Economy Is Here To Stay, the company began to look at its size and at some of the motivations workers have expressed for working independently. It found that gig work encompasses massive income ranges and types of work, a rainbow of possibilities. This second part of the report focuses on the breadth of industries and pay levels the gig economy comprises, starting with coming to a clear definition of what constitutes a gig worker.

Who is the U.S. Gig Worker?

One of the challenges of designing a study that looks into the Gig Economy is coming to a solid definition of âgig work.â The diverse set of professions and income ranges that can be called gig work makes the distillation of factors uniting these workers all the more difficult. Much of the public and political controversy surrounding gig work seeks to answer the same question, an argument that centers on financial factors. The day that U.S. Labor Secretary Marty Walsh proposed to classify gig workers as employeesâa policy centering on classifying drivers as employees, not contractorsâUber and Lyft shares nosedived 8 and 12 percent, respectively. For Legal & General’s study, they settled on a requirement for survey respondents to make 60 percent of their income or more from gig work, and to be neither retired nor a student. From there, most bets were offâthese loose parameters seemed to be the only uniting variables. Incomes ranged widely, from 49 percent earning under $50,000 a year, to 28 percent earning between $50,000 and $99,000, to 23 percent earning between $100,000 and $4 million a year from gig work.

Less surprisingly, the longer their tenure in independent work, the higher their earnings. The demographics of our study respondents shook out at 53 percent male and 47 percent female. One third of respondents were single, while two thirds were in a relationship. While they were scattered across the country, there was a slight skew (34 percent) toward the southern states. They also tended to be very well educatedâ61 percent had attained either a graduate (25 percent) or undergraduate (75 percent) degree. And among the list of 18 possible work sectors we provided, at least 1% of them identified with all of them. These ran the gamut from professional to creative to agricultural to web-based to education, retail, healthcare, delivery, pet careâ¦ and many others (see Figure 1). Those surveyed checked off every box imaginable. 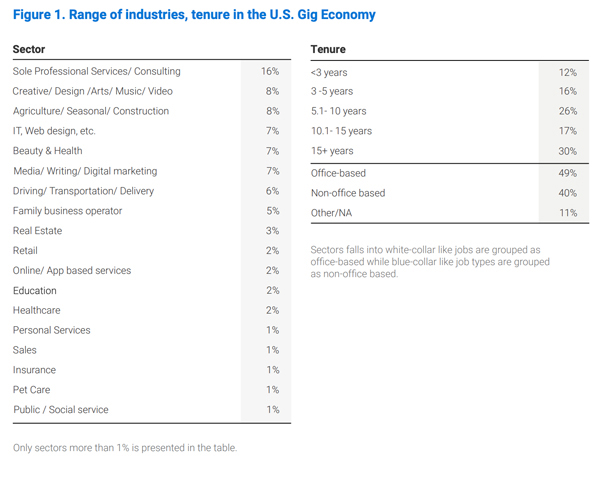 The sheer range of their answers to the seemingly innocent question, âWhat field do you work in?â prompted an unexpected question of identity, causing some respondents to grapple with their multifaceted professional lives to find a one-word summary. If someone self-identifies as a âcreative,â but makes their living as a delivery person in the gig economy, what does that make them? Despite the variety of professions, one sentiment kept recurring through the verbatim commentsâthe desire for flexibility. As one respondent put it: âIt allows me the freedom to go do what I want, when I want.â

This identity question hints at another trendâthe reshaping of the modern American worker as polymath. Gig work seems to unleash a jack-of-all trades mindset, allowing professionals to monetize several seemingly unconnected skillsets. Independent workers clearly donât like to be put in defining boxesâand while this inclination toward being professionally undefined may lead to difficulties in collecting clear data, the overarching intention among the people we surveyed was clear enough. This style of working is removing perceived obstacles and constraints from gig workersâ work-life balance. As a few respondents put it:

The Question Of Pay

Along with the demographics Legal & General’s study took into account, they looked at how these gig workers receive financial compensation. A slight majority, 51 percent, are paid per month. 47 percent of those surveyed said theyâre paid by the hour, while 45 percent said theyâve been paid per project. The share of participants who are paid per week and per day were the sameâ29 percent.

Despite the variety of professions, one sentiment kept recurring through the verbatim commentsâthe desire for flexibility. As one respondent put it: âIt allows me the freedom to go do what I want, when I want...

A Choice With Complex Underpinnings

The people Legal & General talked to who split their income between gig work and traditional employment often do so consciously, not out of necessity, as we will explore in Part 3 of this study. They use the flexibility that freelancing provides to tailor their work life to fit their life outside of work, perhaps building in some of the stability afforded by even a part-time âregular jobâ in the form of health insurance or even having taxes taken out of their paycheck. In Legal & General’s next installment they will dig deeper into the motivations propelling the modern American gig worker. The societal and financial factors behind this wave of independent work are complex and multifaceted, propelled by positive incentives, insecurities and anxieties, and the desire for life, liberty, and the pursuit of happiness. At its deepest level, the gig economy could even be thought of as a quintessentially American phenomenon.