Newer Generations Changing The Way We Give

Almost half of Americans have boosted their giving through the pandemic

A recent study conducted by Versta Research on behalf of Wells Fargo & Company reveals that Millennials lead the way in new forms of giving, with nearly three out of five (57%) having donated via newer channels, versus 49% of Gen X and 34% of Boomers. 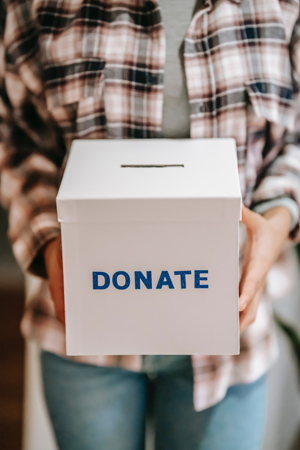 SAN FRANCISCO–(BUSINESS WIRE)–Social media and digital tools have profoundly influenced so much in our culture, including our charitable giving. According to a recent study conducted by Versta Research on behalf of Wells Fargo & Company, almost half of those surveyed, (46%), reported they used newer ways of giving this year, using GoFundMe (35%), social media donation buttons (19%), or giving directly to web entertainers and information sites like Wikipedia (16%).

Millennials lead the way in new forms of giving, with nearly three out of five (57%) having donated via newer channels, versus 49% of Gen X and 34% of Boomers. And regardless of age, a full 79% of respondents said they appreciate these newer ways to give. At times, the plethora of options to give and higher expectations to be charitable adds pressure to Americans, with half (50%) admitting they have a hard time saying no when somebody asks them to give. This is especially true of younger Americans (62% of Gen Z, and 58% of Millennials).

Giving Trends Influenced by the Pandemic

The effects of the pandemic can be seen in peopleâs level of charitable giving, with 57% saying it has changed their giving levels. Almost half (46%) say they are giving more because of the pandemic, and 11% reported giving less. Two out of three Americans (67%) sometimes feel like they do not give enough, and more so for Millennials (74%) and Gen Z (76%).

âAlmost everyone surveyed (95%) say that giving makes them feel good, and the pandemic has accentuated opportunities to give,â said Arne Boudewyn, head of family wealth and culture services at Wells Fargo Bank within the Wealth & Investment Management division. âIn addition to reporting monetary gifts, itâs also heartening to see nine out of 10 try to practice random acts of kindness. Philanthropy isnât always about money, but often is simply a mindset.â

About half of the younger generations want to donate their time rather than money (52% of Gen Z and 48% of Millennials). Overall, one in three Americans would rather donate their time instead of money (64% vs 36).

Philanthropy: Not just for Millionaires

The term âphilanthropistâ might have higher-dollar connotations for people, but taking into account newer and smaller channels of giving, like social media, checkout lines, and other channels included in the survey, an estimated one in three Americans (30%) report they are probably giving more than they think.

As with all things financial, making and sticking to a budget can be just as challenging when it comes to giving. Just under three in ten (29%) have planned intentions with their donations each year, while 71% often give in the spur of the moment, or if they feel âmoved to give.â Only 14% have a yearly budget for donations, and just 31% do any research on the causes they support.

Almost everyone surveyed (95%) say that giving makes them feel good, and the pandemic has accentuated opportunities to give...

âOverall, these findings show a positive trend in community support. But itâs important to understand as much as you can about the charities you support, and it can be really helpful to plan out a giving strategy â particularly if you are making these donations as a family. Researching charities and planning a giving strategy can be a great way to engage with younger members of the family and help instill the value of generosity,â said Boudewyn. âWith more than 87% of respondents having grown up understanding the value of generosity, those are clearly values passed on through the generations. Whether you do so at the grocery store line, social causes, or through a foundation, your support and work is important.â

Versta Research conducted a national online survey of 811 U.S. adults on behalf of Wells Fargo & Company. Sampling was stratified by age, gender, race/ethnicity, income, education, and region, and it was weighted to match current population estimates from the United States Census Bureau. The survey was conducted November 4â16, 2021 and results were provided to Wells Fargo & Company on November 30, 2021. Assuming no sample bias, the maximum margin of error for full-sample estimates is Â±3%.

Wells Fargo Wealth & Investment Management (WIM) is a division within Wells Fargo & Company. WIM provides financial products and services through various bank and brokerage affiliates of Wells Fargo & Company and is one of the largest wealth managers in the U.S., with nearly $2.1 trillion in client assets. WIM serves clients through the following businesses: Wells Fargo Private Bank serves high-net-worth and ultra-high-net-worth individuals and families Wells Fargo Advisors provides advice and guidance to help clients maximize all aspects of their financial lives. Through Wells Fargo Private Bank, WIM is also a leading provider of trust, investment, and fiduciary services, including personal trust services and a number of specialized wealth services designed to meet the diverse needs of high-net-worth clients.

Wells Fargo & Company (NYSE: WFC) is a leading financial services company that has approximately $1.9 trillion in assets, proudly serves one in three U.S. households and more than 10% of small businesses in the U.S., and is the leading middle market banking provider in the U.S. We provide a diversified set of banking, investment, and mortgage products and services, as well as consumer and commercial finance, through our four reportable operating segments: Consumer Banking and Lending, Commercial Banking, Corporate and Investment Banking, and Wealth & Investment Management. Wells Fargo ranked No. 37 on Fortuneâs 2021 rankings of Americaâs largest corporations. In the communities we serve, the company focuses its social impact on building a sustainable, inclusive future for all by supporting housing affordability, small business growth, financial health, and a low-carbon economy. News, insights, and perspectives from Wells Fargo are also available at Wells Fargo Stories.