A Feast of Forecasts

For The New Year, The World Looks A Little Wobbly

Twelve key themes across politics, the economy, and culture that will shape the world in the coming year

Predictions for 2019 from The EconomistÂ (www.economist.com)
With a growing global audience and a reputation for insightful analysis and perspective on every aspect of world events, The Economist is one of the most widely recognized and well-read current affairs publications in the world. The World in 2019 can be found onÂ economist.com 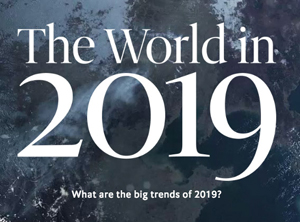 LONDON —Â Â The World in 2019,Â the annual publication fromÂ The Economist, predicts that 2019 will be jittery, citing more populists in power fromÂ BrazilÂ toÂ Italy, a trade war under way between America andÂ ChinaÂ and growing public wariness of technology and giant tech companies.

Daniel Franklin, editor ofÂ The World in 2019,Â said of the publication: âYou will find a feast of forecasts in these pages. On the political front, the Trump Show moves into Series Two, now facing a Democratic-controlled House of Representatives; beyond America, countries with more than a third of the worldâs population will hold nation-wide elections in 2019 â among themÂ India,Â Indonesia,Â NigeriaÂ and the whole of the European Union.â

Mr Franklin continued: âAs for the economy, by mid-year America will be in its longest-ever expansion, but a trade war, rising interest rates and waning stimulus from tax cuts could spell trouble ahead. In short, the world in 2019 looks wobbly.â

Mr Franklin has identified a dozen takeaways for 2019:

1. The economic wind is changing
By mid-year America will break its record for its longest uninterrupted expansion, but by the end of the year it could be heading into a recession.Â Chinaâs growth rate will slow down, whileÂ IndiaâsÂ speeds up. Post-chaosÂ SyriaÂ will top the global growth league; at the other end will be a shrinkingÂ VenezuelaÂ andÂ Iran. InÂ Europe,Â ItalyÂ will flirt with financial crisis.

2.Â The markets converge
But which way?Â Will AmericaâsÂ stockmarket fall back, or the rest of the world rise? The smart bet is on the latter. Americaâs bosses, however, should enjoy life while they can: the good times forÂ USAÂ Inc wonât last.

3.Â Democracy has a big year
Countries with more than a third of the worldâs population will hold nationwide electionsâincludingÂ India, the worldâs biggest democracy, as well asÂ IndonesiaÂ andÂ Nigeria. Optimists hope this will bring the beginnings of a reversal in the global trend of recent years towards declining freedoms.

As for the economy, by mid-year America will be in its longest-ever expansion, but a trade war, rising interest rates and waning stimulus from tax cuts could spell trouble ahead...

4.Â Brexit happens
And asÂ BritainÂ leaves the European Union the recriminations will intensify. The EU, meanwhile, will get a new commission, a new parliament and a new head for the European Central Bank.

5.Â ChinaÂ gets nervous about the number nine
Years ending in nine bring a clutch of awkward anniversaries that worryÂ ChinaâsÂ leaders. In 2019 it is 100 years since the May Fourth Movement, a much-celebrated protest, and 30 years since the bloody suppression of student-led demonstrations in Tiananmen Square.

6.Â Famous figures return to the limelight
They do so thanks to their anniversaries: 150 years since Mahatma Gandhiâs birth, 500 years since HernÃ¡n CortÃ©s arrived inÂ MexicoÂ and sinceÂ Leonardo da VinciâsÂ death (the Tuscan genius time-travels to 2019 to share his observations about the modern world, and his drawings inspire our cover).

7.Â A new Moonrush begins
Fifty years afterÂ Neil ArmstrongÂ took his giant leap for mankind, spacecraft (some of them private) are heading back to the Moon. Meanwhile, NASAâsÂ New HorizonsÂ probe reaches Ultima Thule, in the most distant encounter in the history of spaceflight.

8.Â Thereâºs no hiding from, or for, tech
Whether itâs artificial intelligence or facial recognition, tech will be everywhere. But Silicon Valley may have peaked, and the tech giants will be in regulatorsâ sights in both America andÂ Europe.

9.Â Big Culture makes a splash
America has the excitement of The Shed inÂ New YorkÂ (a giant new space for the arts).Â GermanyÂ experiences the shock of the controversial new Humboldt Forum inÂ Berlin.

11. Itâs the year ofâ¦
the vegan, âslow socialâ, gender self-ID and civil partnerships (gaining ground on traditional marriage in a growing number of countries). Thanks to the UN, it is also the year of indigenous languages. Businesses will need to be increasingly alive to social trends and the politics surrounding them.

12.Â The battle of 2019 begins
The fighting is between PresidentÂ Donald TrumpÂ and a Democrat-controlled Congress. And it will be fierce. â