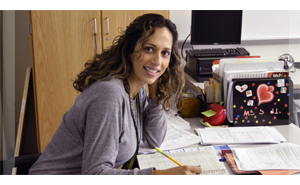 Eight out of ten educators serving in the six states studied can expect to collect pension benefits that are greater in value than what they could receive under an idealized 401(k)-type plan. The study also finds that the typical teacher in these states that offer pensions will serve 25 years in the same state, while two out of three educators will teach for at least 20 years.

These findings are featured in new research, Teacher Pensions vs. 401(k)s in Six States: Colorado, Connecticut, Georgia, Kentucky, Missouri and Texas, from the UC Berkeley Center for Labor Research and Education (Labor Center) and the National Institute on Retirement Security (NIRS). The report is author by Dr. Nari Rhee, director of the Retirement Security Program at the UC Berkeley Labor Center, and Leon (Rocky) Joyner, vice president and actuary with Segal Consulting.

Pensions ‘better matched to a teacher’s career’ than 401(k)

“In the six states analyzed, we find that pensions are significantly better matched to a teacher’s career than 401(k) accounts and that switching away from pensions would sharply reduce the retirement security of education professionals,” says report co-author Nari Rhee. “Moreover, we find that teacher pensions are a critical workforce retention tool, which is a key consideration as public schools in many communities face teacher shortages.”

The study analyzes teacher turnover patterns and projects the final tenure for the current teaching workforce using retirement system actuarial assumptions. Then, the study compares benefits for current teachers under the existing pension and a hypothetical 401(k) account with the same contribution rate as the pension. Importantly, the analysis was weighted to reflect the real-life teaching workforce in each state.

“The evidence is clear that pensions have a magnetic effect on the education workforce and are the most cost-efficient means of providing teachers with a stable and secure income in retirement,” says Diane Oakley, NIRS executive director. “It’s a win-win to provide teachers with pensions because it keeps experienced educators in the classroom while simultaneously providing teachers with retirement security. Thanks to this study, we can put to rest false claims about the adequacy and fairness of teacher pensions,” Oakley explained.

The evidence is clear that pensions are the most cost-efficient means of providing teachers with a stable and secure income in retirement...

The research finds that: 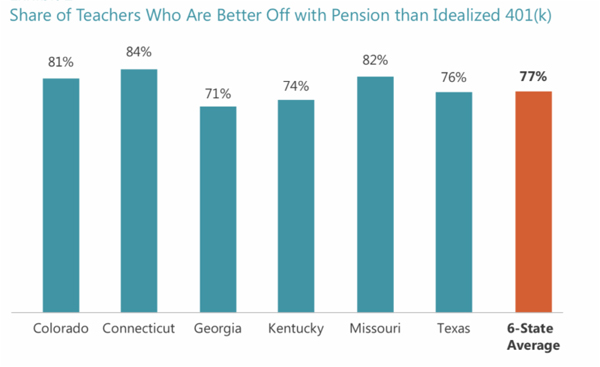 Given these data findings, the report offers four key implications for any policymakers considering pension reform:

1. As teacher shortages worsen, it is important to consider that pensions exert a clear retention effect on experienced teachers, lowering turnover and contributing to education quality.

2. Shifting from pensions to 401(k)s to other account-based plans will increase turnover and significantly reduce the retirement incomes of long-term teachers who conduct most classroom teaching.

3. Shifting to 401(k)s will decrease the aggregate retirement income of teachers, reducing future consumer spending in the state.

4. States concerned about equity between short- and long-term teachers should consider restoring or augmenting portability provisions in existing pensions, such as service credit purchases, pension system reciprocity, matching employee contribution refunds, and allowing non-vested employees to purchase lifetime income. Colorado PERA stands out as a system that provides attractive benefits to teachers and other public servants regardless of tenure.

Webinar on January 17th at 2 PM ET to Review Findings.Â Download the report here. Register for the webinar here.