A recent study from the Center on Retirement Research at Boston College suggests that long-term negative impacts are unlikely. Access the full report here 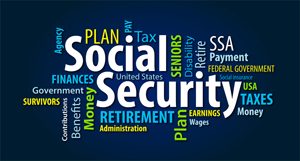 The recent increase to Social Security’s deficit is manageable and unlikely to be severely impacted by the unfolding economic implications of the COVID-19 pandemic, according to new research from The Center on Retirement Research at Boston College (CRR).

Social Security’s Financial Outlook: The 2020 Update in Perspective indicates that while the trust fund depletion date still stands at 2035, long-term negative impacts are unlikely. Further, this pandemic has highlighted the importance of Social Security to older Americans. For millions, their monthly checks are the only steady source of income in retirement. But, the depletion of the fund doesn’t mean bankruptcy for Social Security. Revenue from payroll tax covers 79 percent of the current benefits, according to the research, but relying on this revenue would mean a drop in the replacement rate in years to come.

While Social Security does face a funding shortfall, it only accounts for about one percent of the total U.S. gross domestic product, and dramatic events such as the COVID-19 pandemic are unlikely to have long-term implications on the funding status. If anything, the pandemic has proven the importance of reliable and steady retirement income, the research indicates.

The 2020 Trustees Report, which was prepared before the onset of the COVID-19 pandemic and shutdown of the economy, shows an increase in the programâs 75-year deficit from 2.78 percent to 3.21 percent of taxable payroll. The depletion date for the trust fund remains at 2035.

The increase in the deficit is attributable to four main factors: 1) the repeal of the tax on high premium health plans, resulting in lower earnings and payroll taxes (as total compensation shifts more toward health benefits); 2) a lower assumed total fertility rate, resulting in a higher ratio of retirees to workers; 3) lower inflation, producing an immediate reduction in earnings and payroll taxes and only a delayed reduction in benefits; and 4) a lower interest rate, which means less discounting of large future deficits.

On the administrative side, this report once again reflects the continuing absence of public trustees since 2015. These slots should be filled. Public trustees play an important role in overseeing the program and communicating its status to the public. Their continued absence reflects a failure with the political process, not with the program itself. This brief updates the numbers for 2020 and puts the current report in perspective. It also discusses how the COVID-19 pandemic might affect benefits for new retirees, future cost-of-living adjustments, and overall program finances. The bottom line is that while the deficit is larger, Social Security has once again demonstrated its worth during these tumultuous times, when â in the face of economic collapse â it has continued to provide steady income to retirees and those with disabilities. The program faces a manageable financing shortfall over the next 75 years, which â once COVID-19 is under control â should be addressed so that Americans will have confidence that the program will be able to pay the full amount of promised benefits.

Changes In Costs Over Time

The increase in costs is driven by the demographics, specifically the drop in the total fertility rate after the baby-boom period. A woman of childbearing age in 1964 could expect to have 3.2 children; by 1974 that expectation had dropped to 1.8. The combined effects of the retirement of baby boomers (those born between 1946 and 1964) and a slow-growing labor force due to the decline in fertility reduce the ratio of workers to retirees from about 3:1 to 2:1 and raise costs commensurately. In addition, the long-term increase in life expectancies causes costs to continue to increase even after the ratio of workers to retirees stabilizes. The increasing gap between the income and cost rates means that the system is facing a 75- year deficit.

While Social Security does face a funding shortfall, it only accounts for about one percent of the total U.S. gross domestic product, and dramatic events such as the COVID-19 pandemic are unlikely to have long-term implications on the funding status...

The 75-year cash flow deficit is mitigated somewhat in the short term by the existence of a trust fund, with assets currently equal to about two and a half years of benefits. These assets are the result of cash flow surpluses that began in response to reforms enacted in 1983. Before the Great Recession, these cash flow surpluses were expected to continue for several years, but the recession caused the cost rate to exceed the income rate in 2010

Impact of COVID-19 on Benefits, COLAs, and Finances

As noted, the 2020 Trustees Report was prepared before the onset of the COVID-19 pandemic. The following discussion offers some thoughts on how the pandemic and ensuing shutdown could affect Social Security benefits, cost-of-living adjustments (COLAs), and overall program finances.

To the extent that COVID-19 results in a decline in average earnings in 2020, those born in 1960 (who turn 60 in 2020) could see a permanent cut in their benefits. The problem arises because past earnings and the benefit formula are adjusted by Social Securityâs Average Wage Index (AWI). Benefits are calculated in three steps. The first step is determining the workerâs Average Indexed Monthly Earnings (AIME), which involves adjusting nominal earnings for each year up to age 60 by the AWI, identifying the highest 35 years (which can
include unindexed wages earned after age 60), and dividing by 12 to produce a monthly figure.

The second step is to calculate the workerâs Primary Insurance Amount (PIA): the benefit payable at the Full Retirement Age, which for workers age 60 in 2020 is age 67. The PIA is calculated by applying Social Securityâs progressive benefit formula to the workerâs AIME.
In 2018, the formula was:

The dollar âbend pointsâ in the benefit formula are also adjusted by the AWI (but up to age 62 rather than age 60). For the 1960 birth cohort, the bend point values used to calculate their benefits will reflect the growth of the AWI between 2018 and 2020. The final steps involve increasing the benefit up to the age of retirement using the Social Security COLA and then reducing the benefit for early claiming or increasing it for later claiming (up to age 70).

The first is the conventional figure showing the program costs and income as a percentage of payrolls over the next 75 years. The pandemic and its aftermath could shift the long-run cost and income lines. While it is always possible that a multi-year period of very low revenues could lower the income line, these long-run cost and income curves are not easily moved as they already implicitly incorporate recessions and recoveries. In other words, while it is not impossible, the 75-year projections may not be the first place to look for action.