The New Quest For Yield...

A recent blog by A.M. Bestâs Terrence Dopp examines how Life insurers are increasingly turning to bundled corporate-loan investment vehicles, which due to their structures offer a higher return than similarly rated debt. Reprinted with permission. Visit here for more details. 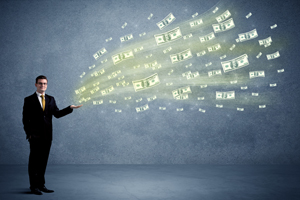 It’s no secret that the past year has been a choppy one at best on the economic front. As COVID-19 struck, the equities markets tumbled; then soared to reach record highs. The residential real estate market seemed impervious to pandemic shocks.

Yet joblessness is also up; and interest rates have held at historic lowsâgood for homebuyers but a drag on the investment portfolios of those with blocks of long-term risk. Life insurers, stymied by the low rates to back up the obligations on their books, have been on a multi-year hunt for yield. Collateralized loan obligations, or CLOs, have become attractive to life and other insurers as they shift out of traditional investment-grade corporate holdings into alternative assets in the hopes of mixing higher returns with a degree of safety. For life insurersâthose with large legacy books in particularâthe securities offer a safer way to offset the declining yield from maturities and lower-yield new corporate debt.

In fact, in the three-year span ending in 2019, rated life insurers drove growth in CLO investments of more than 40% to $114 billion, according to a January Best’s Special Report, Insurers’ CLO Holdings Continue to Grow, but Exposures Are Manageable. For life/health insurers, the share of CLOs in fixed-income portfolios rose to 4% of invested assets in 2019 from 2.7% in 2016âexposure levels AM Best categorizes as manageable.

What Else Is There?

âThe question becomes what else is there in the market that is offering an attractive yield with a certainty of cash flow, at a given rating quality and capital charge,â Jennifer Quisenberry, head of structured securities at New England Asset Management, said. âThat is sort of the broad equation when you’re looking across fixed income instruments. CLOs do tend to generate a greater spread all else equal.â

Institutional investors, a class that includes insurance companies, hold about three-fourths of U.S. CLOs, the Board of Governors of the Federal Reserve System said in June. Across all lines, U.S. insurers held 32.9% of that total.

As the pandemic took root, economies shuttered and workers were furloughed or laid off.

CLOs are basically corporate bank loans bundled together and sold in tranches. They typically offer yield above investing in straight corporate credits due to the complexity of the instruments, the fact that companies can refinance or call the debt and the varying credit ratings of the underlying loan.

While CLOs might not comprise a huge share of insurers’ portfolios, the instruments can be complex and research is key.

Two of the securities can theoretically contain analogous underlying loans but differ in performance due mainly to their individual structures. AM Best Associate Director Jason Hopper said this is the type of management and research item life companies need to keep in mind when overseeing that 4% of their investments in the CLOs.

âFrom that aspect, that’s not any outsized share,â Hopper said. âThe next question it boils down to is capital and surplus and it’s not a widespread industry phenomenon that many companies have too significant of an exposure to capital.â

In comparison to capital and surplus, fewer than 10% of rated life/annuity companies had a CLO exposure that was more than 50% of that measure, AM Best found. âMiddle marketâ CLOs, which account for about 10% of the leveraged loan market, as a rule are composed of loans to companies with $500 million or less in revenues and $50 million or less in pretax earnings.

While comprising a small segment of the overall market, those tranches typically are subordinated to the higher rated ones to achieve an investment grade rating, the report found. 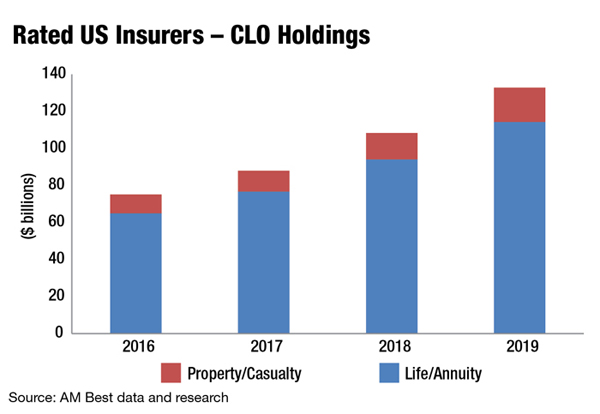 Insurers have been attracted by the structures, features and protections of CLOs for many reasons.

They have prohibitions on shorting securities. Use of derivatives is forbidden. The investment vehicles also are constrained from over-concentrating in any one industry or straying from strict indenture requirements, or covenants.

At the same time companies have been expanding their positions there also has been an influx of first-time investors in the asset class.

The rationale behind CLOs as an investment class is simpleâhigher yields than similarly rated corporate bonds. The reasons for the higher yields include the complexity of the investmentâthink of 100 corporate bank loans bundled into one packageâand lost liquidity compared to a bond.

The question becomes what else is there in the market that is offering an attractive yield with a certainty of cash flow, at a given rating quality and capital charge...

Also, there’s a bigger role for CLO managers who have some flexibility in rejiggering loans in the portfolio if they are downgraded or refinanced.

âMore return means more risk, and a lot of the investment managers who recommend this for their insurance clients and other clients are basically saying ‘we’re getting this extra spread and do it at similar risk as corps,’â he said. âWe don’t say free lunch; the only free lunch in investing is diversification.â

His firm’s client book includes life/health and property/casualty insurers with anywhere from $100 million to $2 billion portfoliosâthe median is $200 million to $215 million, he saidâand they tend to be conservative. The firm does at times recommend so-called risk assets, which they define as any non-investment grade bondsâand he said CLOs make up about zero to 10% of clients’ accounts. The credit quality of the U.S. insurers’ exposures declined slightly from 2018, according to data from the National Association of Insurance Commissioners, though they invest primarily in senior, high-credit-quality tranches. For the companies investing in CLOs, AM Best found the exposure âmanageableâ though it noted those with large exposures could face increased capital charges in the event of ratings downgrades.

Despite a somewhat higher risk than corporate debt, history has demonstrated CLOs to be resilient in the worst of times.

While the name is close to the collateralized debt obligations that were a factor in the 2008 financial crash, the two diverged greatly in their performance back then. One key difference lies in the underlying holdings: many CDOs at the time consisted of CDOs being repackaged into new CDOs, rather than the straight loan portfolios involved in a CLO.

Quisenberry, of NEAM, said that because CLOs are dynamic in terms of the provisions and protections inherent in the structure, they’ve done well during the pandemic and the so-called Great Recession more than a decade ago. âWhen we look at the performance of these structures, it’s really been outstanding in terms of the minimal degree of loss during the global financial crisis,â she said.

Reasons for this include the ability of CLO managers to swap out of loans to avoid losses and the fact that underlying loan defaults and downgrades trigger haircuts in calculating the overcollateralization ratio, causing cash flow to be redirected to senior classes in certain cases, she said. Underlying loans can face some downgrades or default risk without a downgrade of more highly rated classes in the CLO, she added.

Hopper of AM Best said that dynamic nature is embedded in the nature of CLOs, which have undergone shifts and added new protections into the covenants since 2008. In part, that evolution from Version 1.0 to the current Version 3.0 is integral to their rise as protections were enhanced.

Spread is the name of the game in CLOs. The money is derived from a spread of return relative to benchmark interest rates. Like any other instrument, the further down the ratings scale you drop the higher that spread is. The securities use a sequential âwaterfallâ payment structure meaning investors buy into the securities at different risk levels and those at the most senior levels are first in line to receive cash flow if that happens.

The aggregate yield is derived from a spread above a benchmark interest rate. While property/casualty insurers have traditionally participated in the highest parts of the ratings scale (i.e. single-A and above), life insurers have been more willing to step a bit further down though they’ve largely stuck to investment-grade securities, according to Quisenberry.

In the AA or AAA ratings classes, by midsummer of 2020 no CLOs had seen negative ratings actions and for A-rated ones that increased to about 1%. Based on a recent report from Deutsche Bank, no AA or AAA-class CLOs rated by S&P and Moody’s had seen negative ratings actions during all of 2020 and for A-rated securities it was 4%. At the BBB level, the figure was 13%.

âI tend to think of life insurance companies as being more focused on single-A and triple-B buyers (as well as higher rated classes) because they are reaching for yield,â she said. âCertainly, there have been negative rating actions at the triple-B part of the capital structure, but I would not consider a 13% downgrade percentage, with the potential for those ratings to recover, to be extreme considering the degree of economic upheaval caused by the pandemic.â

Another wrinkle in the security’s structure is that the underlying loans are callable by the borrowersâin plain English, after an upfront period where it’s forbidden, the loans can be refinanced at a lower rate and no longer fit into the original parameters.

CLOs are likely to play a crucial role in insurers’ portfolios for the foreseeable future as rates stay low, Quisenberry said. âWe’re seeing once again that transactions are able to withstand the stresses in front of them,â she said. âIn the context of a broadly diversified portfolio they do certainly make some sense. They are useful for duration positioning and in certain rate environments.â

Cogert, who said he sees CLOs as a key component of a well-rounded portfolio, said the age-old, first rule of investing is at play. He hasn’t yet seen the over-saturation that can prove risky. âWe’re back to diversification,â he said. âToo much of any one asset class can hurt you. For our clients, it’s anywhere from zero to 10% on the high end. It’s not a big holding at all.â