Who’s responsible for my happiness? 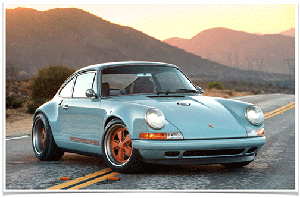 I need three hundred thousand dollars. Come to think of it, maybe I need half a million dollars. Iâm not really sure. I just know I have to own Singer Vehicle Designâs restored, reimagined, and reborn Porsche 911 and thatâs about what they cost.

The price is variable because the cars are completely custom. And the $350 â $500,000 is the cost AFTER I deliver a pre-owned cherry 1990 â 1994 air-cooled Porsche model 964 to their California facility for the re-creation. Iâll also need 50 or 60 grand to build a climate-controlled garage at home to store my gorgeous new/old 911. And Iâll need a little more to pay for the trips back and forth to California to see my car being constructed and the shipping charges to get it home safe and sound. Of course Iâd like to drive it cross-country but I canât imagine putting all those miles and wear and tear on my pride and joy. A stone chip in the baby blue and orange Gulf racing livery? OMG, perish the thought.

Come to think of it, half a million wonât really be enough. After all, this isnât the kind of car anyone spends their last pennies onâit has to be the kind of purchase that doesnât make a noticeable dent in your disposable income or net worth. The kind of purchase that the people on Forbesâ latest Richest People in America list could buy. The kind of buy that folks like Jerry Seinfeld, Jay Leno, Russian oligarchs or some random Arab sheik might make on their way back from the store. Heck, if the cars didnât take so long to complete, those buyers would probably snatch up a few in different shades just to suit their moods or their datesâ eye color.

So how much are we up to now? Four million? Five? Would that kind of sum in my bank account be enough to justify a Singer in my garage? When would I actually have enough to pull the trigger?

In other words, how much is enough?

âDonât compareâ is my constant reminder that no one else is responsible for my happiness or satisfaction â neither the people Iâm striving to emulate, nor the ones who want what I already have

Donât compare With These Guys; So, how much is enough?

I was only 12 when my grandma Mollie died but I remember going to her apartment after elementary school. First sheâd serve me a big plate of the special flat cookies sheâd bake or the âcheese things without any cheeseâ (I hated cheese and I guess she figured it was easier to call them that then actually change the recipe) and then Iâd tell her about my day. At the time I didnât much care what someone else had as much as how quickly theyâd run the 50-yard dash or how far theyâd thrown the softball (always faster and further than I had, by the way).

âDonât compareâ doesnât tell me not to work for more just as it doesnât admonish me to be happy with what I have, nor even remind me not to lord what I have over those who have less. Instead, âDonât compareâ is my constant reminder that no one else is responsible for my happiness or satisfaction â neither the people Iâm striving to emulate, nor the ones who want what I already have.
My grandmother didnât tell me that âsomeone else is happy with less than what you have,â nor did she lecture me about the kid who couldnât run because he had no shoes or the kid who couldnât throw because he had no arms. âDonât compareâ was her simple admonishment and advice that has served me well in the 43 years since I last heard her voice.

Of course âdonât compareâ doesnât tell me how to get my Singer 911 either, but somehow Iâm okay with that.