Nearly Half of Business Owners Have Been Victims of Cyber-Attacks... But Didn't Even Know It

One in three victims spent at least $50,000 to recover, yet rebuilding reputation and customer trust can take more than a year 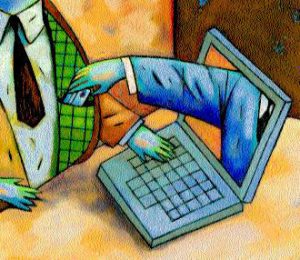 COLUMBUS, Ohio, Oct. 9, 2017 /PRNewswire/ — One company became a victim when a cybercriminal infected it with a ransomware virus, taking its servers hostage and holding them for ransom.

Another business was attacked by an organized gang of cybercriminals that planned a complex social engineering scheme to steal customer credit card information by impersonating a third-party vendor and installing malware.

Such attacks are becoming more common and can potentially cripple a company’s work and reputation â forcing them to pay hundreds to thousands of dollars. While both businesses experienced different forms of cyberattacks, they survived in part because having cyber coverage from Nationwide provided them with the necessary resources that enabled them to have quicker recovery time and fewer expenses than if they had to go it alone.

According to Nationwide’s third annual survey of 1,069 business owners with 1-299 employees, more than 20 percent of cyberattack victims spent at least $50,000 and took longer than six months to recover. But 7 percent spent more than $100,000, and 5 percent took a year or longer to rebuild their reputation and customer trust.

“Cyberattacks are one of the greatest threats to the modern company,” said Mark Berven, president of Property & Casualty for Nationwide, the No. 1 total small-business insurer1 in the country. “Business owners are telling us that cybercriminals aren’t just attacking large corporations on Wall Street. They’re also targeting smaller companies on Main Street that often have fewer defense mechanisms in place, less available capital to re-invest in new systems and less name recognition to rebuild a damaged reputation.”

Nationwide’s survey found that 13 percent of business owners said they experienced a cyberattack. However, that number jumped to 58 percent total when owners were shown a list of the following types of attacks â revealing a 45 percent gap and lack of understanding about what constitutes an actual attack:

Part of the problem facing a business’ ability to recover from an attack is that a majority of owners are not prepared. In fact, 57 percent of owners do not have a dedicated employee or vendor monitoring for cyberattacks â and therefore, could be victims without even knowing it.

Most have no plan in place

Further, most don’t have a cyberattack response plan in place (76 percent), a plan in place to protect employee data (57 percent) or a plan to protect customer data (54 percent). Threats continue to grow as more companies are now frequently using new technologies such as the Internet of Things (37 percent) and Artificial Intelligence (24 percent) in a potentially unprotected environment.

Cyberattacks are one of the greatest threats to the modern company

Methodology
Nationwide commissioned a 20-minute, online survey among a sample of 1,069 U.S. small business owners. Small business owners are defined as having between 1-299 employees, 18 years or older, and self-reported being a sole or partial owner of their business. The margin of error for this sample is +/-3% at the 95% confidence level. Conducted by Edelman Intelligence, a full-service consumer research firm, the survey was fielded between May 16-24, 2017. As a member of CASRO in good standing, Edelman Intelligence conducts all research in accordance with Market Research Standards and Guidelines.

About Nationwide
Nationwide, a Fortune 100 company based in Columbus, Ohio, is one of the largest and strongest diversified insurance and financial services organizations in the U.S. and is rated A+ by both A.M. Best and Standard & Poor’s. The company provides a full range of insurance and financial services, including auto, commercial, homeowners, farm and life insurance; public and private sector retirement plans, annuities and mutual funds; banking and mortgages; excess & surplus, specialty and surety; pet, motorcycle and boat insurance. For more information, visit www.nationwide.com.

Nationwide, Nationwide is on your side, and the Nationwide N and Eagle are service marks of Nationwide Mutual Insurance Company.