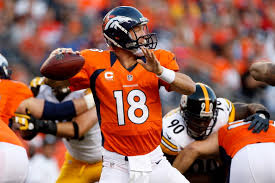 âWeâre also excited to work directly with the Denver Broncos. Broncos fans are passionate and loyal and weâre eager to connect with them and demonstrate that On Your Side is much more than a jingle.â

Manning, one of professional footballâs most popular players and owner of multiple league records during his distinguished professional career, deepens Nationwideâs long-term presence in the sport to better engage and connect with football fans across the country.

âIâm excited about my new partnership with Nationwide,â Manning said. âI view myself as more than a football player just like Nationwide is âMore Than A Business.â Together, we can help people successfully plan for the future and give back to the community.

âIâm partnering with Nationwide because it is a company that puts people first. To me, thatâs what On Your Side means. Iâm very proud to be a member of the Nationwide team.â

As part of the agreement, Manning will work with the Nationwide family of companies to support consumer and business offerings in the auto, home, life and retirement categories.

Additionally, Manning will be featured in national advertising starting this fall.

âWeâre proud to welcome Peyton Manning and the Denver Broncos to the Nationwide family,â said Matt Jauchius, Chief Marketing Officer for Nationwide Insurance. âThere are a lot of great athletes in America, but only a select few truly connect with the American public. Peyton Manning is one of these special individuals. Partnering with him will have a positive impact on our business and bring great pride to Nationwide agents, members and associates. Itâs a great fit for Nationwide.

There are a lot of great athletes in America, but only a select few truly connect with the American public

âWeâre also excited to work directly with the Denver Broncos. Broncos fans are passionate and loyal and weâre eager to connect with them and demonstrate that On Your Side is much more than a jingle.â

âThe Broncos are very pleased with this new relationship with Nationwide,â said Joe Ellis, President of the Denver Broncos. âWe will create unique fan and customer experiences with Nationwide and look forward to working with them this season.â

About Nationwide
Nationwide Mutual Insurance Company, a Fortune 100 company based in Columbus, Ohio, is one of the largest and strongest diversified insurance and financial services organizations in the U.S. and is rated A+ by both A.M. Best and Standard & Poorâs. The company provides a full range of insurance and financial services, including auto, commercial, homeowners and life insurance; public and private sector retirement plans, annuities and mutual funds; banking and mortgages; specialty health; pet, motorcycle, boat and farm insurance. For more information, visit www.nationwide.com.

Nationwide, On Your Side, Join the Nation, More than a Business and the Nationwide frame mark are service marks of Nationwide Mutual Insurance Company.