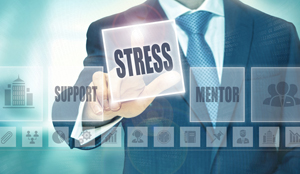 June 13, 2018 —Â CHATTANOOGA, Tenn.–(BUSINESS WIRE)–Recent research from Unum (NYSE: UNM), a leading provider of leave management services and employee benefits in the U.S., details the prevalence of stress and behavioral health concerns among the nationâs men. In support of Menâs Health Month, insight from recent consumer research, claims data and Unum professionals include:

Men experience many sources of stress

In a Unum-commissioned consumer poll among U.S. adults earlier this year, nearly half (47 percent) of men said they experience stress or anxiety at least once or twice a week. Among these guys, finances (45 percent), home life and family (37 percent), job responsibilities (33 percent) and personal health (32 percent) were the leading stress triggers. Stress has physical, behavioral and cognitive side effects. While it can manifest differently from person to person, common signs include a significant change in quality of work, professional demeanor or personality.

âStress impacts worker productivity and can escalate over time to more serious health concerns and absences,â said Greg Breter, senior vice president of Benefits at Unum. âWhile stress may not be reported as the primary cause of absence, itâs often the underlying issue that caused or exacerbated another health condition and slowed down recovery.â

Finances are the top cause of stress among men

In addition to finding that 45 percent of men were stressed about their finances, Unumâs consumer study also found that half of households would not be able to pay bills for more than two months if they were unable to work and earn an income. About one in four (27 percent) could pay bills for only a month.

âIdeally, you should have three to six monthsâ worth of living expenses on hand in case your income dries up or you have a large unexpected expense,â said Adams. âBut if youâre starting from scratch or have substantially less savings, remember that having some cash to fall back on is better than none.â

In addition to maintaining a healthy emergency fund, another key way to safeguard your finances from the unexpected is to have the right insurance. One in three adults will become disabled for at least three months sometime during their working years.

For more insight and tips on living healthy and reducing stress, visit WorkWell.

Unum Group (www.unum.com) is a leading provider of financial protection benefits in the United States and the United Kingdom. Its primary businesses are Unum US, Colonial Life, and Unum UK. Unumâs portfolio includes disability, life, accident and critical illness, dental and vision coverage, which help protect millions of working people and their families in the event of an illness or injury. Unum also provides stop-loss coverage to help self-insured employers protect against unanticipated medical costs. The company reported revenues of $11.3 billion in 2017 and provided nearly $7 billion in benefits.