The Mood Of The Markets: Economic Optimism Rising

What investors were actually doing, and how they were positioned

The latest TD Ameritrade Investor Movement Index reveals that clients were net buyers overall, but net sellers of equities in May. 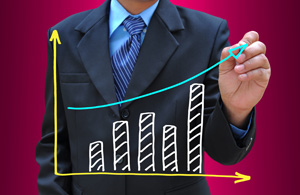 June 07, 2021 — OMAHA, Neb.–(BUSINESS WIRE)–The Investor Movement IndexÂ® (IMXSM) increased .18 to 8.32 in May, up from its April score of 8.14. The IMX is TD Ameritradeâs proprietary, behavior-based index, aggregating Main Street investor positions and activity to measure what investors actually were doing and how they were positioned in the markets.

The reading for the four-week period ending May 28, 2021 ranks âHighâ compared to historic averages.

âClients took some risk off the table in May, favoring assets such as U.S. ETFs and Fixed Income over equities,â said JJ Kinahan, chief market strategist, TD Ameritrade. âItâs the first time since October of last year that clients have been net sellers of equities, while mostly maintaining their level of overall exposure to the Markets in an environment in which the Indices were mostly unchanged. This is often caused by the equity buys being in higher Beta stocks. Looking forward it seems economic optimism may be on the rise â the economy is slowly but surely gaining strength and the market seems to have shaken off some of the recent inflation worries for now.â

Equity markets were mixed during the period. The S&P 500 and Dow Jones Industrial Average both moved higher, by 0.55% and 1.90% respectively. The Nasdaq Composite moved lower by 1.56%. Economic data was mostly positive during the month. Consumer spending continued to rise, up 0.5%, as the CDC continued to loosen mask mandates and more Americans spent on services, dining out, and travel.

New jobless claims fell more than expected to set a new pandemic-era low, while President Biden unveiled a $6 trillion spending plan with big proposed increases on infrastructure. The Federal Reserve began to telegraph an eventual shift away from its easy monetary policy as evidence mounts of a continued economic recovery and rising inflation.

TD Ameritrade clients were net buyers overall during the May IMX period but were net sellers of equities. This marked the first time since October that equities were net sold. Some of the popular equity names bought during the period were:

TD Ameritrade clients were net sellers of equities in this period, including: 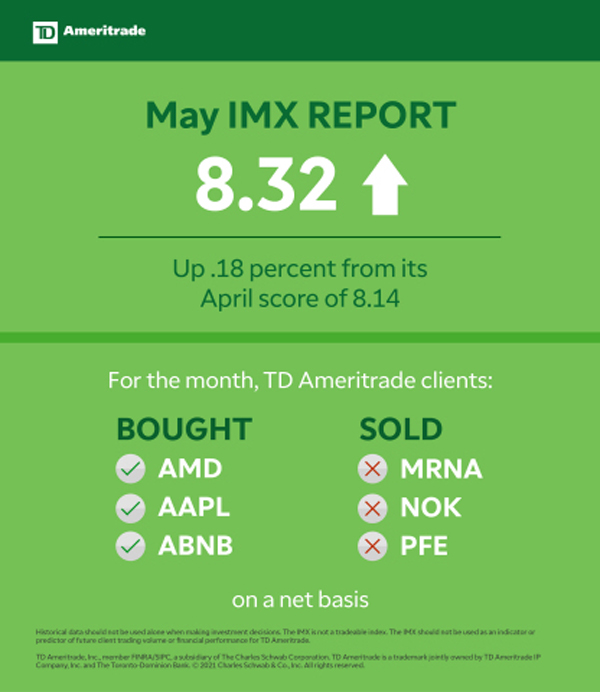 About the IMX
The IMX value is calculated based on a complex proprietary formula. Each month, TD Ameritrade pulls a sample from its client base of funded accounts, which includes all accounts that completed a trade in the past month. The holdings and positions of this statistically significant sample are evaluated to calculate individual scores, and the median of those scores represents the monthly IMX.

For more information on the Investor Movement Index, including historical IMX data going back to January 2010; to view the full report from May 2021; or to sign up for future IMX news alerts, please visit www.tdameritrade.com/IMX. Additionally, TD Ameritrade clients can chart the IMX using the symbol $IMX in either the thinkorswimÂ® or thinkorswim Mobile platforms.