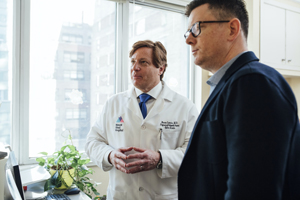 COLUMBUS, Ga., June 21, 2022 /PRNewswire/ — Men aren’t paying enough attention to their personal health care and they’re particularly tight lipped when it comes to mental health, according to the newly released Aflac Men’s Health Survey. The study of 1,000 U.S. men reveals fewer than half, 47%, had an annual checkup or wellness visit either virtually or in person in the past 12 months. Additionally, just 37% had a routine dental exam and only 29% had a routine eye exam in the past year. At the same time, 1 in 4 men admitted they’ve never talked to anybody about their mental health and well-being despite 72% of respondents stating they experienced some type of mental or behavior health concern in the past 12 months alone.

“The last two years have been incredibly challenging, and many people delayed doctor’s visits and procedures due to the pandemic. Unfortunately, even now as pandemic conditions have eased, this study shows that many men are still avoiding health care and need a wake-up call about their health priorities,” said Aflac Senior Vice President of Distribution Expansion and Consumer Markets Jeramy Tipton. “Many men press snooze on important opportunities to proactively screen for and avert illnesses, which could help prevent more serious and costly health issues in the future.”

According to respondents, the majority of men are experiencing mental or behavioral health concerns, yet many sidestep conversations about these important health issues. Anxiety, trouble sleeping and depression were most commonly reported in the study, and 49% of men said these concerns affect their productivity at home or work. Additional key findings:

A full 79% of Gen Z and millennial men reported having a mental or behavioral health concern within the past year, compared to 57% and 68% among Gen X and baby boomers. Gen Z and millennials were also more likely to report that mental health affected their productivity at home and work.

Men from the study who said they worry about finances were more likely to experience a behavioral or mental health concern, 78% compared to 56% who were not that worried or not worried at all about finances. Additionally, roughly two out of five men, 38%, postponed or avoided going to a doctor or filling a prescription because of the medical costs â even higher among millennials, 49%. Still more, 26%, feel they don’t have enough insurance to cover all of their medical needs.

“Even with health insurance, there are out-of-pocket costs that many people aren’t able to pay,” explained Tipton. “Aflac is meeting today’s rapidly changing benefit needs with flexible coverage that helps take care of expenses health insurance doesn’t cover. Insured individuals can use their benefits to help with medical co-pays, deductibles and prescriptions or everyday living expenses like rent, utilities or child care. We make wellness benefits, telemedicine and more available as value-added services to encourage individuals to take advantage of annual checkups.”

Final expense planning was also a touchy issue for many men, according to the study. Most of the men surveyed, between 59% and 68%, admitted they’d rather clean out their garage, mow the grass, finish a honey-do list or take out the trash than talk about final expenses with their loved ones. One-third also admitted they don’t know how they’ll pay for final expenses, such as funeral costs, should anything happen to themselves or an immediate family member. Similar to mental health concerns, one-fifth of men reported never discussing final expenses with anybody.

Many men press snooze on important opportunities to proactively screen for and avert illnesses, which could help prevent more serious and costly health issues in the future...

Men expressed strong interest in tools or additional benefits coverage to support their mental health and wellness: 62% would be interested in using some form of help or coverage to support their mental health and wellness that they do not currently use or have available, including access to a doctor, psychologist or counselor online, mental health care insurance and screenings, and apps to track mood and set health reminders. Men also called out the women in their life, wife or girlfriend, and mother as the most notable influences motivating them to see a doctor besides themselves.

The Men’s Health Study was conducted online in May 2022 by Kantar Profiles on behalf of Aflac and included a nationally representative sample of 1,001 men ages 18-65. Definitions of the age generations used in the survey: Gen Z â 18 to 24 years; millennials â 25 to 40 years; Gen X â 41 to 56 years; baby boomers â 57 to 65 years.

For more information about this survey please visit: aflac.com/menshealth.

Aflac Incorporated (NYSE: AFL) is a Fortune 500 company helping provide protection to more than 50 million people through its subsidiaries in Japan and the U.S., paying cash fast when policyholders get sick or injured. For more than six decades, insurance policies of Aflac Incorporated’s subsidiaries have given policyholders the opportunity to focus on recovery, not financial stress. In the U.S., Aflac is the number one provider supplemental health insurance products[1]. Aflac Life Insurance Japan is the leading provider of medical and cancer insurance in Japan, where it insures 1 in 4 households. In 2021, Aflac Incorporated was proud to be included as one of the World’s Most Ethical Companies by Ethisphere for the 16th consecutive year. Also in 2021, the company was included in the Dow Jones Sustainability North America Index and became a signatory of the Principles for Responsible Investment (PRI). In 2022, Aflac Incorporated was included on Fortune’s list of World’s Most Admired Companies for the 21st time and Bloomberg’s Gender-Equality Index for the third consecutive year. To find out how to get help with expenses health insurance doesn’t cover, get to know us at aflac.com or aflac.com/espaÃ±ol. Investors may learn more about Aflac Incorporated and its commitment to ESG and social responsibility at investors.aflac.com under “Sustainability.”