MEDICARE at 50: Is It Sustainable for 50 More Years? 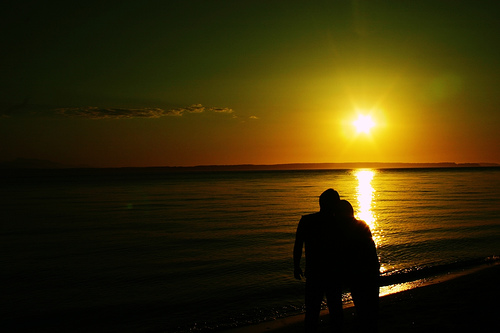 New research from The American Academy of Actuaries


Medicare turns 50 this year. Prior to its enactment in 1965 as part of President Lyndon Johnson’s Great Society initiative, many elderly Americans had inadequate health insurance coverage or no coverage at all.

In some cases they had to choose between skipping needed medical care or taking on a financial burden they could not afford. Since then, Medicare has played a vital role in providing health care benefits to nearly all Americans age 65 and older.

Subsequent eligibility changes have extended Medicare coverage to certain individuals under age 65 who, because of medical or physical impairments, are also vulnerable to lacking coverage—those with end-stage renal disease (ESRD) and those with permanent disabilities.1

In total, nearly 54 million Americans had Medicare coverage in 2014. But is the program sustainable for 50 more years? In other words, are the demands it places on beneficiaries, providers, plans, and taxpayers manageable enough that the program is unlikely to be discontinued or curtailed? Will all significant stakeholders accept its balance between benefits and costs—and how those costs have been spread?

According to these criteria, Medicare faces long-term sustainability challenges. As the baby boomer population ages into the program over the next few decades, Medicare enrollment will grow dramatically and the number of workers per enrollee will shrink.

Benefit payments are expected to exceed payroll taxes, threatening solvency of one of its major trust funds. And Medicare will make up increasing shares of federal government and household spending, meaning decreasing shares will be available for other needs. The Affordable Care Act, enacted in 2010, includes provisions designed to reduce Medicare’s costs and improve its quality, but additional steps must be taken to ensure the program’s long-term sustainability.

The trustees of the two Medicare trust funds issue a formal status report each year. It includes projections of future revenues, expenses, and trust fund balances. The report is prepared with input from the Office of the Actuary of the Centers for Medicare and Medicaid Services (CMS). It also includes a formal statement of actuarial opinion by the CMS Chief Actuary. This statement of actuarial opinion provides an assessment of the reasonableness and appropriateness of the report’s methods and assumptions.

As the baby boomer population ages into the program over the next few decades, Medicare enrollment will grow dramatically and the number of workers per enrollee will shrink 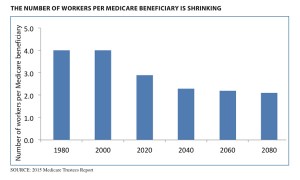 Currently, trust fund revenues are about equal to Medicare’s total expenditures, but spending is projected to outpace revenues over time, due primarily to two factors. First, increasing longevity and the retirement of the baby boomers will dramatically increase the number of Medicare beneficiaries over the next decades. Second, although health spending growth has slowed in recent years, in the longer term, per capita beneficiary spending is expected to increase faster than economic growth, further contributing to Medicare spending increases.

As a result of expenditures increasing faster than revenues, the assets built up in the HI fund are projected to be depleted by 2030, according to the Medicare Trustees’ latest report. At that point, annual payroll taxes will cover only 86 percent of the program’s costs. Bringing the trust fund back into balance will require cuts in program spending, increased funding, or some combination of the two.

In addition, increasing general revenue contributions place additional pressure on the federal budget, potentially lowering the funds available for other national priorities or increasing the pressure to raise additional revenues.

Working-age adults fund Medicare, through payroll taxes and income taxes. However, growth in the retiree population coupled with lower fertility rates is causing the ratio of workers to Medicare beneficiaries to shrink. Fewer workers will be paying into the system to support the growing number of retirees. In 1980 there were four workers for every Medicare beneficiary; by 2040 that ratio is expected to fall to about two workers for every beneficiary.

For the past 50 years, the Medicare program has helped provide access to health care for the nation’s retiree population. More needs to be done, however, to ensure the program is sustainable for the next 50 years. Policymakers should pursue approaches that would sustain and extend the recent slowdown in health care cost growth.

By addressing Medicare’s long-term solvency and sustainability challenges now, more gradual changes could be made sooner, giving beneficiaries, providers, and taxpayers more time to adjust. If Congress and the administration delay action, larger benefit cuts or tax increases for Medicare would be required.