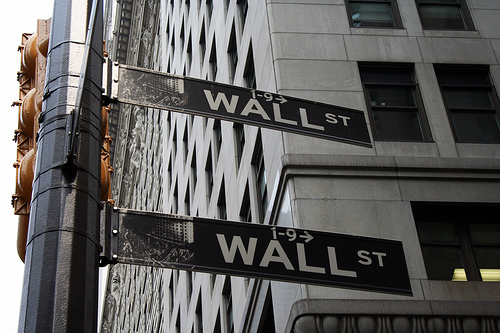 Despite a steady stream of better-than-expected earnings reports, markets retreated during a volatile week. Overall, the S&P 500 lost 0.08%, the Dow retreated 0.29%, and the Nasdaq fell 0.49%.

Earnings seasons is halfway over, and thus far, among the 240 S&P 500 firms that had reported as of last Friday, total revenues are up 3.7%, and earnings results are up 2.0% from the same period last year. Overall, while growth remains weak and fewer companies are beating revenue estimates, the general sentiment is: “not bad.” Excluding the Finance sector (which is being dragged down by weak Bank of America results), revenue and earnings growth last quarter was in line with historical averages.

Q1 in black and white

Why the volatile market performance last week? Investors already knew Q1 results would be weak, and those negative expectations were mostly priced into markets. However, markets are forward-looking and traders are more concerned about growth prospects going forward. The escalating tensions in Ukraine also weighed on investors, who are nervous about the potential effects of geopolitical issues on corporate profits. If Russia makes good on its threats to cut off natural gas supplies to Ukraine and Europe, general prices would probably go up, hurting consumer demand and economic growth in Europe. This could have serious implications for firms doing business overseas.

Investors already knew Q1 results would be weak, and those negative expectations were mostly priced into markets

Economic data was a mixed bag last week. The number of Americans filing new unemployment claims rose more than expected last week, but economists think the increase is seasonal and doesn’t suggest any fundamental shifts in the labor market. We’ll have a clearer picture when the April jobs report comes out this Friday.

Durable goods orders surged in March as businesses purchased long-lasting goods like household appliances, cars, and consumer electronics. An increase in this area generally means that retailers expect to be able to sell those products in the coming weeks and months. Consumer sentiment rose to a nine-month high in April as Americans became more optimistic about current and future economic prospects. Though consumer sentiment is known to be volatile, we can hope that improving job and business conditions will lead to greater consumer spending this quarter.

Investors will have a lot to digest in the week ahead with a Federal Open Market Committee (FOMC) policy meeting on Tuesday and Wednesday, the first Q1 Gross Domestic Product (GDP) estimate on Wednesday, and the April jobs report on Friday. Analysts don’t expect the Fed to change interest rates or its QE tapering schedule, though Fed Chairman Janet Yellen might use her official speech as an opportunity to provide further guidance about interest rate plans.