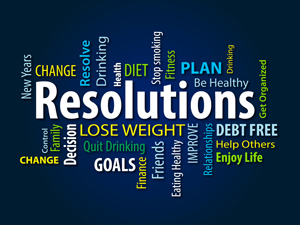 BOSTON, Dec. 11, 2017 â According to the ninth annual Fidelity InvestmentsÂ® New Year Financial Resolutions Study, thereâs a lot to feel good about as 2017 draws to a close.

However, as America enters into the ninth year of a bull market, there also appears to be a sense of inertia setting in, with the number of people making financial resolutions at an all-time low.

Only 27 percent of respondents indicate they intend to make a financial resolution for the year ahead, down from its highest point of 43 percent for those who considered a resolution for 2014.

âFinancial resolutions are on the decline because many people are feeling better about their personal financial situation and are generally optimistic about what 2018 will bring,â said Ken Hevert, senior vice president of Retirement at Fidelity.

âNow is not the time to take oneâs foot off the pedal, because good financial times can represent the best opportunities to help achieve your goalsâand establish saving and investing habits that can get one through good times and bad. Even if you donât feel a burning need to create a financial resolution, you can still resolve to identify financial areas needing improvement and make some smart financial moves before December 31.â

For the year ahead, the top picks among those considering a financial resolution held steady from the previous year, although a larger percentage intend to save more than in 2016.Â Interestingly, saving is a big factor for the overall feeling of prosperity in 2017â66 percent of respondents who feel they are now in a better financial position attribute this at least in part to being able to save more. This is even more pronounced among Millennials, with 78 percent saying saving more has improved their financial picture. Interestingly, nine in 10 (90 percent) of Millennial respondents believe they will be better off financially in 2018.

Despite the overall prosperity enjoyed by so many, respondents from all generations have concerns about the year ahead: 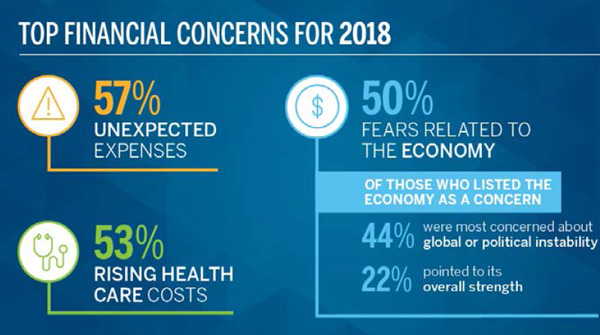 Among those who list saving more as one of their top financial resolutions for 2018, the majority (54 percent) plan to do so for long-term goals, while 38 percent plan to focus on the near-term. While this is encouraging, it is a shift away from a bigger focus on long-term savings goals seen in 2016, when 62 percent indicated they were focused on the long-term and 32 percent on the short (2015 levels were similar to 2016).

Of note, for all respondents surveyed, 43 percent say they plan to increase their retirement savings rate by one percent or more of their salary in the year ahead. However, 62 percent of all Millennialsâthe generation that can benefit the most in the long-termâplan to increase their retirement savings by at least one percent. On the short-term front, 54 percent of all respondents say they are planning to build up their emergency savings as a result of recent natural disasters.

During periods of increased overall prosperity, a rise in charitable giving can also often occur. In fact, 58 percent of all respondents plan to increase their household charitable giving in the year ahead. This number has been consistent for the past two years, although an increase from 2014 (54 percent). Gen X-ers lead the way at 64 percent, followed closely by Millennials at 63 percent and Boomers at 56 percent.

Make Your Last Financial Resolution in 2018

One compelling reason to avoid inertia from setting in: to beat financial stress. The Fidelity study indicates that nearly four in 10 (38 percent) respondents report feeling stressed about finances. The biggest cause for this anxiety: half cited personal factors they have some control over (such as debt, expenses and saving). The good news, though, is many of these stressors can be alleviated by avoiding procrastination and taking steps to save more, reduce debt and curb spending. In fact, 70 percent of respondents report setting financial goals makes them feel less stressed about their finances.

This theory is corroborated by the Fidelity New Year Financial Resolutions Study. For four years, the study has taken a look at the positive impact simply making a resolution can have on improving oneâs financial condition.

This year, the data reveal:

One solution to avoiding ever having to make a financial resolution: make saving and investing a permanent habit and something you do day-to-day, not just a once-a-year commitment. âAccording to the experts, 40 percent of daily actions arenât decisions, but habits,â says Hevert. âHow we choose to interact with money can become one such habit. Although it may require a bit of work up front, by learning to make smart decisions with regard to saving and investing that become automatic actions, itâs possible to make 2018 the year you make your final financial resolutionâand still end up more prosperous in the long-term.â

Need Help Focusing on Your Finances? Tips for Getting Started

For people looking to stick with a first-time financial resolution or who are simply interested in pointers on how to maintain their momentum beyond January, the survey offers direction. Respondents identify the following as top motivators: feeling encouraged by the progress youâve made so far (74 percent); being able to see the bottom-line benefit of sticking to a resolution over the year (68 percent); breaking a goal into smaller, more attainable short-term goals or rewarding yourself when you reach your goal (both tied at 62 percent).

Looking for additional tips? Fidelity has published a new Viewpoints called â3 ways to succeed at New Yearâs resolutions,â available at fidelity.com/resolutions. In addition, âEssential money moves to make before year endâ and âFive things to review annuallyâ offer financial reality checks, with guidance on preparing for 2017 taxes and managing finances in the New Year.

For those looking to improve retirement savings, Fidelity has introduced the Fidelity Retirement Score. In less than 60 seconds, anyone can see how they are doing against their estimated retirement needs and get ideas on how to improve their score. Fidelity customers and guests can also obtain more information at the Fidelity Planning & Guidance Center. The end of the year can also be a good time to organize your financial life, and FidSafe offers a free and secure digital place to store, access and share important documents, such as a will, life insurance policies and birth certificates.
-more-

For more information on Fidelityâs New Year Financial Resolutions Study, a fact sheet can be found on Fidelity.com.

About the Fidelity Investments New Year Financial Resolutions Study
This study presents the findings of a telephone survey conducted among two national probability samples, consisting of 2,059 adults, 18 years of age and older. Interviewing for this CARAVANÂ® Survey was completed on October 19-22 and 26-29, 2017 by ORC International, which is not affiliated with Fidelity Investments. The results of this survey may not be representative of all adults meeting the same criteria as those surveyed for this study.
About Fidelity Investments
Fidelityâs mission is to inspire better futures and deliver better outcomes for the customers and businesses we serve. With assets under administration of $6.6 trillion, including managed assets of $2.4 trillion as of October 31, 2017, we focus on meeting the unique needs of a diverse set of customers: helping more than 26 million people invest their own life savings, 23,000 businesses manage employee benefit programs, as well as providing more than 12,500 financial advisory firms with investment and technology solutions to invest their own clientsâ money. Privately held for 70 years, Fidelity employs more than 40,000 associates who are focused on the long-term success of our customers. For more information about Fidelity Investments, visit www.fidelity.com/about.