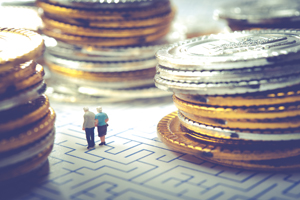 New research by the Employee Benefit Research Institute (EBRI) finds that retirees are not spending down their accumulated assets to fund their retirement needsâeven though the risk of large out-of-pocket health care costs may be modest.

The EBRI Issue Brief, âAsset Decumulation or Asset Preservation? What Guides Retirement Spending?â shows that even when assets are plentiful or when there is guaranteed income available to ensure that retirees will not run out of money, rates of decumulation are low:

– While some retirees had spent down most of their non-housing assets in the first 18 years following retirement, about one-third of all sampled retirees had increased their assets over that period.[i]

– Depending on the amount of non-housing assets immediately before retirement, the median retiree had spent down between 11.8 and 27.2 percent of their assets during the first two decades of retirement, with the lowest percentage of spending belonging to those with the highest level of pre-retirement assets.

– Pensioners were much less likely to have spent down their assets than non-pensioners. During the first 18 years of retirement, the median non-housing assets of pensioners (who started retirement with much higher levels of assets) had gone down only 4 percent, compared to a 34 percent decrease for non-pensioners.

âThe evidence shows that many retirees are reluctant to spend down their assets,â notes Lori Lucas, president and CEO of EBRI. âThis likely has to do with all of the financial uncertainties connected with retirement. People donât know how long they are going to live or how long they have to fund their retirement from their assets. They may also be afraid of facing catastrophic health care costs if they need to stay in a long-term care facility for a prolonged period.â

Our research finds that while the majority of long-lived elderly do enter a nursing home, fewer than one-third incur out-of-pocket nursing home expenses

Says Lucas: âThe bottom line is that if retirees are determined to preserve their assets and not to spend them down, this creates important implications–ranging from the type of retirement products offered to how retirement preparedness is assessed. However, if such drawdown patterns are the consequence of behavioral biases or lack of education on how to safely spend down retirement savings, this has quite different implications when it comes to necessary tools and support for retirees as they seek to manage their assets in retirement.â

[i] Non-housing assets do not include assets in an employer-provided retirement plan such as a 401(k), which could be a significant portion of savings. However, any 401(k) funds rolled over to an IRA are included.
[ii] The Issue Briefs use data from the Health and Retirement Study (HRS), which initially excludes institutionalized persons (i.e. those in prisons, jails, nursing homes, long-term or dependent care facilities). This has the potential to mute the right hand tail for long-term care costs. Some research has shown that subsequent rounds of surveys properly represent the institutionalized population.