Majority of RIAs and Fee-Based Advisors Say Brexit Will Not Impact U.S. Economy or Clientsâ Portfolios 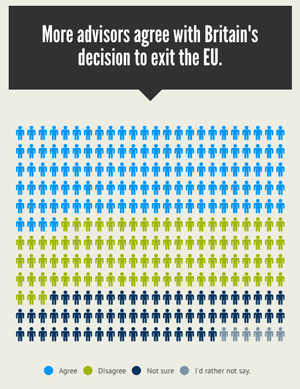 Louisville, KYâ(August 4, 2016)â Jefferson National, a recognized innovator committed to meeting the unique needs of Registered Investment Advisors (RIAs), fee-based advisors and the clients they serve, announced results from its latest survey of 370 RIAs and fee-based advisors on the unprecedented Brexit vote and its potential impact.

While Brexit has gained attention worldwide and has been an extreme volatility-inducing event, the surveyâs findings reveal that 85% of advisors have not revised their investing strategy in response to the initial vote on the referendum in late June. Furthermore 87% of advisors do not plan to revise their investing strategy if parliament invokes Article 50 to allow Britain to exit the EU.

While the initial Brexit vote drove sharp losses and a flight to quality across global markets, US markets quickly rebounded. In late June, the NYSE recovered from a more than 5% drop within three days, and is now at highs not seen since one year ago.

UK markets have begun to stabilize in the near term, and the FTSE 250 stock index has also reached pre-referendum levels. Yet there is still tremendous uncertainty regarding the decision and experts say more volatility in the UK seems likely as many expect the economy may be heading for a sharp slowdown.

No ripple-effect across the pond

âAlthough Brexit has had a destabilizing effect on British politics and global markets, findings from our most recent survey indicate that RIAs and fee-based advisors believe Brexit will not have a negative impact on the U.S. economy overall or their clientâs portfolios,â says Laurence Greenberg, President of Jefferson National. âAs panic around Brexit drives more volatility, especially among individual investors, it reinforces the need for a financial advisor. Faced with increasing uncertainty at home and abroad, investorsâ outlook for the year is somewhat tentativeâbut according to our 2016 Advisor Authority study, investors who work with advisors are far more optimistic than those who do not.â

RIAs and fee-based advisors believe Brexit will not have a negative impact on the U.S. economy

Among the additional findings in Jefferson Nationalâs most recent survey, nearly two-thirds (64%) of advisors think that Brexit will have the most impact on the financial services sector of the U.S. economy, with minimal impact on all other sectors.

Furthermore, when asked if they think other countries will exit the EU, advisors say the most likely candidates include Italy (43%), France (41%), Spain (29%) and Germany (29%). If passed, Brexit could have a profound impact on the EU. According to recent World Bank estimates, the EU has a GDP of $18.7 trillion and the UK is one of its largest members with a GDP $3 trillion.

To download a copy of Advisor Authority, financial professionals can visit here.