Majority of Women Are âVery Concernedâ about Retirement Savings 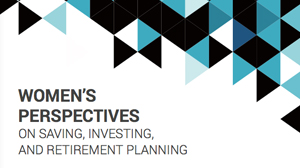 WASHINGTON, D.C. â The Insured Retirement Institute (IRI) today released a new study on womenâs retirement planning perspectives that found eight in 10 women have concerns about saving enough for retirement, with the majority, 54 percent, saying they are âvery concerned.â

âThe anxiety expressed by women is understandable when you consider the challenges they face in achieving a financially secure retirement,â IRI President and CEO Cathy Weatherford said. âIncome disparities and time out of the workforce are among factors that will reduce retirement savings as well as Social Security and employer-provided retirement benefits.”

At the same time, longer lifespans will necessitate more savings to produce additional years of retirement income. To overcome these challenges, women will need to channel their concerns into positive actions. This is an area where the retirement planning community can make a significant impact, but it will require a more thorough understanding of womenâs priorities, values, and preferences.â

The study revealed womenâs preferences when evaluating a financial advisor. Compared to men, women place much more importance on a financial professionalâs ability to explain financial concepts clearly without talking down to them. 58 percent of women compared to only 35 percent of men say this is extremely important. Women also place a higher level of importance on advisorsâ ability to listen well, use new technologies, and consistently follow up. Women also emphasize that they want advisors to talk to them and not just their spouses.

Other key findings from the report:
Income disparities and time out of the workforce are among factors that will reduce retirement savings as well as Social Security and employer-provided retirement benefits