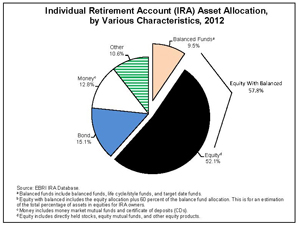 WASHINGTONâAlmost 60 percent of individual retirement account (IRA) owners have their savings in an âextremeâ investment allocation in 2012, meaning less than 10 percent or more than 90 percent in a particular investment category, according to a new report by the nonpartisan Employee Benefit Research Institute (EBRI).

Male and female IRA owners had virtually identical average allocations to bonds, equities, and money. However, males were more likely to have assets in the âotherâ category, while females had a higher percent-age of assets in balanced funds.

Those older or owning a traditional IRA had, on average, lower allocations to equities. Individuals with the largest balances had the lowest combined exposure to equities (including the equity share of balanced funds to the pure equity funds).

The EBRI IRA Database is a unique ongoing project that collects data from IRA plan administrators. For 2012, it contains information on 25.3 million accounts with total assets of $2.09 trillion. For each account within the database, the IRA type, the account balance, any contributions during the year, the asset allocation, and certain demographic characteristics of the account owner are included (among other items). Furthermore, the accounts can be linked by the account owner to aggregate the accounts to the individual level both across and within data providers, which allows for behavioral studies at both the individual and account levels.

EBRIâs analysis study includes the first look at asset allocation longitudinally from 2010â2012 and finds that equity allocations in 2010 were very similar to those of 2012. This result appears to be driven by the almost-60 percent of accounts that remained at either a 0 percent allocation or a 100 percent allocation in both years.

This study is the third examination of asset allocation from the EBRI IRA Database. It examines asset allocation on a dollar-weighted basis within IRAs by type and account balance as well as by gender and age of the account owner. In addition to presenting the average asset allocation across the accounts, this study includes a presentation of the percentage of accounts with âextremeâ allocationsâeither less than 10 percent or more than 90 percent in a particular asset category. This helps illustrate the distribution of the allocations to the various assets across all of the IRAs. Furthermore, a longitudinal component is added to this study to see how the asset allocations of those in the database have changed.

The full report, âIRA Asset Allocation, 2012, and Longitudinal Results, 2010â2012,â is published in the October EBRI Notes, online at www.ebri.org