Losing an Income: Countdown to Disaster 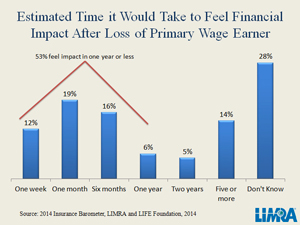 reprinted with permission from the LIMRA’s Industry Trends blog.

The emotional loss of someone close is always hard. If they are a primary wage earner the financial loss can be devastating.

This week LIMRA and Life Happens (formerly the LIFE Foundation) released findings from the 2014 Insurance Barometer at the Life Insurance Conference in Chicago. In it consumers were asked how long it would take to feel the financial impact from the loss of a primary wage earner. More than half said they would feel the impact within a year; 47 percent of them in only six months. (see chart)

Yet, millions of Americans are without life insurance. We know consumers think it is important as 80 percent of respondents said they believe most people need life insurance. Yet only one in five are very likely to recommend it to a friend and only 10 percent are very or extremely likely to purchase a policy within the next year.

If nearly a third of the people admit they don't know the financial impact of losing a primary wage earner, that's an important opening for companies and advisors to start a dialogue

Perhaps these inconsistencies are partially explained by the responses of 28 percent of those surveyed who said they don’t know how long it would take to feel the financial impact after the loss of the primary wage earner.

If nearly a third of the people admit they don’t know the financial impact of losing a primary wage earner, that’s an important opening for companies and advisors to start a dialogue. As a start, these consumers can be encouraged to obtain a needs analysis to better understand their financial vulnerabilities and strengths. LIMRA research shows that people who have received a needs analysis are more likely to buy a policy and to purchase more coverage than those without one.

A needs analysis allows consumers to get a better understanding of the financial risks they face and how much the coverage they need to protect their family. Not surprisingly, purchasing the right amount of coverage ranked first among the factors consumers found important when considering life insurance, according to the study.

The Insurance Barometer is an annual trending study that tracks perceptions, attitudes and behaviors of consumers with a particular emphasis on life insurance.