Excerpts from a recent essay from The Commonweatlh Fund, authored by Mannett Healthâs Cindy Mann, reveal how overturning ACA could alter structural improvements to Medicaid. Reprinted with permission. Access the full report, including an interactive map, here. 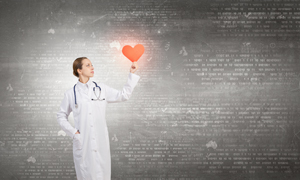 November 12, 2020 – All eyes and ears were focused on the Supreme Court on November 10th when it heard arguments in California v. Texas, the case challenging the constitutionality of the Affordable Care Act (ACA). While the case focuses on the validity of the individual mandate, a decision striking down that provision could bring down the entire law if the Court decides, as the Trump administration has urged, that if the mandate is unconstitutional the entire ACA must fall. That result would cause millions of people to lose coverage, particularly in the states that expanded Medicaid. The fate of the Medicaid expansion, however, is just one of the many ways the ACA impacts Medicaid.

Thirty-eight states and Washington, D.C. have adopted the Medicaid expansion. As of June 2019, nearly 15 million people were covered under the expansion; enrollment has grown sharply over the past several months as a result of pandemic-related job losses. In the nearly six years since the expansion has been in effect, research has shown how the Medicaid expansion benefits enrollees, states, and health care providers. The program also has helped to advance equity goals.

Data show that from 2013 to 2018, the uninsured rate among Black adults in Medicaid expansion states dropped by more than half, from 21.5 percent to 10.1 percent. During this same period Latino adults also saw significant improvements, with uninured rates dropping from 36.3 percent to 19.1 percent. Although coverage rates also improved in non-expansion states, more than one-third (34.3%) of Latino adults in those states were uninsured in 2018.

Expansion states have experienced budget savings and revenue gains, which have offset a large portion of their costs associated with the expansion. Savings were generated from the higher federal match for services or populations (e.g., people with disabilities) previously covered either at a lower matching rate or fully at the stateâs expense.

Medicaid Expansion Status as of November 2020, with Expansion Enrollment as of June 2019: 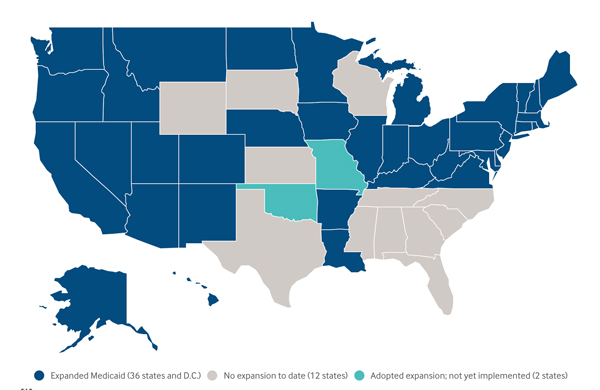 The ACA has changed Medicaid beyond expanding coverage. The changes below, which took effect in expansion and non-expansion states, could have a profound effect, especially during the current recession:

Before the ACA, the Medicaid application and renewal processes were left largely to states. To promote coverage and reduce churn, the ACA required simplification and coordination with other coverage programs. Eliminating these requirements could bring back processes that depressed enrollment, including more frequent renewals, long applications and paper-driven verification, and requirements for beneficiaries to submit monthly income reports.

The ACA introduced a new method for calculating Medicaid eligibility for all populations other than the elderly and disabled. It replaced a net income methodology with a calculation based on modified adjusted gross income (MAGI) and prohibited consideration of assets. While this greatly simplified the process for states and families, the conversion to MAGI required a recalculation of eligibility levels in every state and an overhaul of statesâ technology systems. If the ACA is voided, states would need to undo the changes and reinstate the old rules, which would be costly and time-consuming. It is unclear if the enhanced federal match that supported the overhaul would be available to rebuild the systems.

The ACA created new eligibility pathways for providing home and community-based services for people who need long-term services and supports. It also provided a higher federal match for states to promote access to these services in lieu of nursing home care.

Care management for high-needs enrollees. Under a âhealth homesâ provision, the ACA increased the federal share for care management provided to Medicaid enrollees with chronic conditions. As of April, 20 states had approval for 35 health home models.

Extending drug rebate. The ACA extended the Medicaid drug rebate to Medicaid managed care organizations; without it, drug costs for managed care beneficiaries will grow significantly. States might respond by excluding pharmacy from managed care, but that would make care management more challenging.

Destabilizing Markets and Shifting Costs Back to States

The expansion population accounts for about 20 percent of the Medicaid population nationwide. If the ACA ends, many of the health plans serving Medicaid will experience significant destabilization, with delivery system consequences for the non-expansion population. In addition, some ACA provisions bolstered Medicare and private insurance coverage. Eliminating them could shift costs onto Medicaid. For example, the ACA prohibits annual and lifetime limits for most commercial plans. If those limits are reestablished, people might turn to Medicaid for supplemental coverage â for example, for children with costly medical needs.

A decision striking down the Affordable Care Act could erase 10 years of structural improvements in Medicaid and impose new costs on states. The federal government could work with states to address some of the damage, but without statutory authority, the administrationâs hands will be tied in many areas. Most notably, without statutory authority, the only avenue for maintaining the Medicaid expansion is through a federal waiver, but that would not be sufficient to restore the 90 percent federal matching rate under the ACA. Congress could avert the damage, but given the partisan divide, legislation will prove challenging. However, with strong public support for the ACA, if the Supreme Court does strike down the law, Congress will face intense pressure to act.