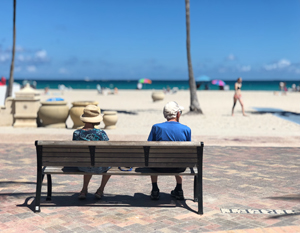 Since 2016, individual claims paid have exceeded individual premiums, indicating an underwriting loss. Despite group U.S. LTC claims being under 70% of premiums during the period, reserve increases have led to group loss ratios in excess of 100% since 2017. The steady increase in claims and the continuous increase in reserves have placed continued pressure on many carriersâ capital and earnings.

U.S. LTC premiums essentially have remained flat in recent years, hovering at approximately $11 billion per year. The number of new policies issued has declined, to 120,000 in 2019 from roughly 190,000 in 2015, representing just over 2% of the number of in-force policies.

LTC In The Midst Of The Pandemic

Several companies with material blocks of in-force LTC business have reported favorable results in 2020 as a result of the COVID-19 pandemic, as higher mortality has led to reduced payouts. Additionally, the reluctance to enter nursing homes has led to lower utilization rates. These trends are expected to be temporary, however, depending on when COVID-19 cases ease and vaccines become widely available.

The LTC remains heavily concentrated, with the top two companiesâGenworth Financial Companies and John Hancock Life Insurance Groupâaccounting for more than 40% of the industryâs net premium in 2019. Ultimately, the increased concentration in recent years is more function of companies reducing exposure or leaving the space rather than larger writers generating more business development, although some carriers are offering offer LTC protection indirectly through combination products with accelerated-benefit riders. These policies increased by more than 75% between 2015 and 2019.

The NAIC has created a task force to help stabilize the LTC market. An early proposal is weighing a consistent national approach for reviewing LTC rates. AM Best views this as a very difficult task given the state-by-state insurance regulatory structures in place, and expects continued use of closed blocks to separate the legacy liabilities from the new ones in order to increase transparency to outside users of financial statements. AM Best also expects LTC insurers to trend toward simplified policy design and fewer assumptions embedded in their policies. Along with carriers slowing down on offering lifetime benefits coverage and inflation-adjusted features, insurers may also soon begin to disregard lapse rates as an underlying assumption for product pricing.

To access the full copy of this market segment report, please visit http://www3.ambest.com/bestweek/purchase.asp?record_code=304928.

AM Best is a global credit rating agency, news publisher and data analytics provider specializing in the insurance industry. Headquartered in the United States, the company does business in over 100 countries with regional offices in New York, London, Amsterdam, Dubai, Hong Kong, Singapore and Mexico City. For more information, visit www.ambest.com.
Copyright Â© 2021 by A.M. Best Rating Services, Inc. and/or its affiliates. ALL RIGHTS RESERVED.