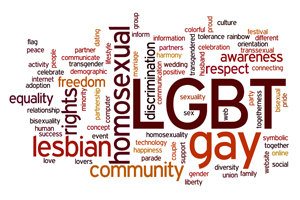 LOS ANGELES, Jan. 25, 2018 /PRNewswire/ — A new study released today finds that Lesbian, Gay, Bisexual, and Transgender (LGBT) workers in the U.S. are outperforming LGBT workers in eight other countries with regard to retirement readiness.

This first-of-its-kind study, LGBT: Retirement Preparations Amid Social Progress, is a collaboration between Aegon Center for Longevity and Retirement (ACLR) and nonprofits Transamerica Center for Retirement StudiesÂ® (TCRS) and Instituto de Longevidade Mongeral Aegon. It is based on findings from a survey of 900 LGBT workers and retirees across nine countries: Australia, Brazil, Canada, France, Germany, the Netherlands, Spain, the United Kingdom and the United States.

“In recent decades, the decriminalization of homosexuality and the enactment of legal protections and recognition of rights have enabled greater social and professional progress for the LGBT community in many countries. Importantly, the legalization of same-sex marriage makes same-sex spouses eligible for survivor benefits for government and employer-sponsored retirement plans,” said Catherine Collinson, CEO and president of Transamerica Institute and TCRS, and executive director of ACLR. “Historically, the LGBT community has been a segment of the population most likely to retire in poverty. As a researcher, I am cautiously optimistic that the results of our survey point to an improving retirement scenario for today’s LGBT workers.”

“Today’s generation of LGBT workers has a much brighter retirement outlook than that of previous generations who were often disenfranchised and deprived of many civil rights,” said Collinson. “The extent to which LGBT workers in the U.S. are saving and planning for retirement is impressive. However, continued social progress in LGBT communities in the U.S. and throughout the world is needed to further bridge inequalities and foster an inclusive environment that supports personal and professional growth and long-term financial security. We cannot forget the lessons of history and the current reality that many older LGBT people, in the absence of legal protections and same-sex marriage rights throughout their working years, are now financially struggling in retirement,” said Collinson.

LGBT: Retirement Preparations Amid Social Progress offers a detailed portrait of the retirement readiness of the LGBT community, country-specific fact sheets, and comparisons with heterosexuals. The report is based on the 6th Annual Aegon Retirement Readiness Survey. The survey was conducted online in February 2017 among a nationally representative sample, including an oversample of those who self-identified as LGBT in Australia, Brazil, Canada, France, Germany, the Netherlands, Spain, the U.K. and the U.S. The total sample of 900 LGBT includes 808 workers (full-time, part-time, and semi-retired) and 92 retirees.

Please visit www.transamericacenter.org for the report, infographics, and other information about the research. Follow TCRS on Twitter @TCRStudies. 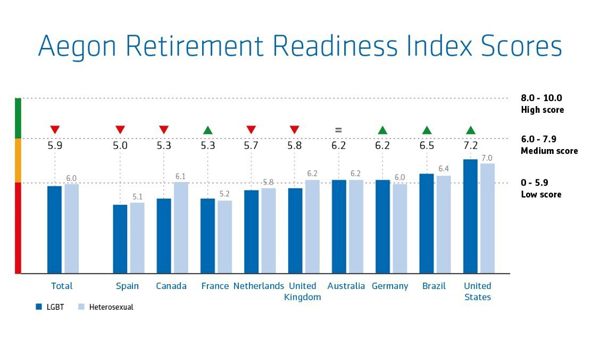 About Aegon Center for Longevity and Retirement
The Aegon Center for Longevity and Retirement (ACLR) is a collaboration of experts assembled by Aegon with representation from Europe, the Americas, and Asia. ACLR’s mission is to conduct research, educate the public, and inform a global dialogue on trends, issues, and opportunities surrounding longevity, population aging, and retirement security. www.aegon.com/thecenter