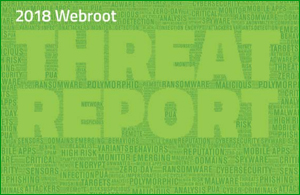 BROOMFIELD, Colo., March 22, 2018 /PRNewswire/ — Webroot, the Smarter CybersecurityÂ® company, revealed the results from the 2018 edition of its annual threat report, which demonstrated attackers are constantly trying new ways to get around established defenses. The data, collected throughout 2017 by Webroot, illustrates that attacks such as ransomware are becoming a worldwide threat and are seamlessly bypassing legacy security solutions because organizations are neglecting to patch, update, or replace their current products.

Cryptojacking is gaining traction as a profitable and anonymous attack that requires minimal effort. Since September 2017, more than 5,000 websites have been compromised with JavaScript cryptocurrency miner CoinHive to mine Monero by hijacking site visitors’ CPU power.

Windows 10 is almost twice as safe as Windows 7. However, the data reveals that the operating system migration rate for enterprises has been quite slow; Webroot saw only 32 percent of corporate devices running Windows 10 by the end of 2017.

Polymorphism, i.e. creating slightly different variants of malicious or unwanted files, has become mainstream. In 2017, 93 percent of the malware encountered and 95 percent of potentially unwanted applications (PUAs) were only seen on one machine. In these instances, the identifiers are unique and undetectable by traditional signature-based security approaches.
Ransomware and its variants became an even more serious threat. This past year, new and reused ransomware variants were distributed with a variety of purposes. Together, WannaCry and NotPetya infected more than 200,000 machines in over 100 countries within just 24 hours.

Of the hundreds of thousands of new websites created each day in 2017, 25 percent of URLS were deemed malicious, suspicious, or moderately risky. High-risk URLs fell into two major categories: malware sites (33 percent) and proxy avoidance and anonymizers (40 percent).

Phishing attacks are becoming increasingly targeted, using social engineering and IP masking to achieve greater success. On average, phishing sites were online from four to eight hours, meaning they were designed to evade traditional anti-phishing strategies. Only 62 domains were responsible for 90 percent of the phishing attacks observed in 2017.
Mobile devices continue to be a prime target for attackersâ32 percent of mobile apps were found to be malicious. Trojans continue to be the most prevalent form of malicious mobile apps (67 percent), followed by PUAs (20 percent).

“Over the past year, news headlines have revealed that attackers are becoming more aggressive and getting extremely creative. Cryptojacking made our threat report for the first time this year as an emerging threat that combines everything an attacker could want: anonymity, ease of deployment, low-risk, and high-reward. Organizations need to use real-time threat intelligence to detect these types of emerging threats and stop attacks before they strike.”

About Webroot
Webroot was the first to harness the cloud and artificial intelligence to protect businesses and individuals against cyber threats. We provide the number one security solution for managed service providers and small businesses, who rely on Webroot for endpoint protection, network protection, and security awareness training. Webroot BrightCloudÂ® Threat Intelligence Services are used by market leading companies like Cisco, F5 Networks, Citrix, Aruba, Palo Alto Networks, A10 Networks, and more. Leveraging the power of machine learning to protect millions of businesses and individuals, Webroot secures the connected world. Headquartered in Colorado, Webroot operates globally across North America, Europe, and Asia. Discover Smarter CybersecurityÂ® solutions at webroot.com.