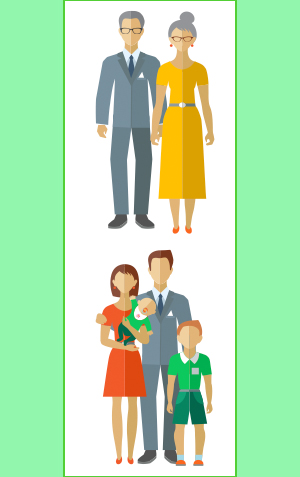 OMAHA, Neb., February 24, 2016 /BUSINESS WIRE/ — The results are in. Moms and dads really canât have it all â or at least they canât without some form of compromise.

So say the 2,000 parents who took part in the TD Ameritrade Parents and Grandparents Retirement Survey, which examines the financial habits and attitudes of millennial parents and boomer grandparents.

While their parenting philosophies may be worlds apart, on this much the generations agree: parents of all ages are willing to make significant personal trade-offs in order to support their growing families without losing sight of their long-term financial goals.

However, parents of both generations agree that such trade-offs should not come at the expense of loved ones. While 54 percent of grandparents find the combination of saving for retirement and supporting adult children âvery stressful,â they and their millennial parent counterparts agree that family still comes first.

Trade-offs that are non-starters include:

Spending less on children: just 20 percent of grandparents and 12 percent of millennial parents would be willing to spend less money on their children

Having fewer kids: 15 percent of millennials would be willing to have fewer children

15 percent of millennials would be willing to have fewer children

Expenditures in these cases included:

âTapping into retirement accounts early can put your retirement at risk, and for those parents serving as the âfamily bank,â this could negatively impact the whole family,â Sadowsky said. âRetirement savers are able to stay the course and stay disciplined by taking a few fundamental steps, including: setting aside an emergency fund so they donât need to tap into their retirement nest egg to cover unexpected expenses, and developing a clear financial plan that can help protect and potentially grow their nest egg. People with a financial plan are three times as likely to be confident they will reach their retirement goals.â

About TD Ameritrade Holding Corporation
Millions of investors and independent registered investment advisors (RIAs) have turned to TD Ameritradeâs (Nasdaq: AMTD) technology, people and education to help make investing and trading easier to understand and do. Online or over the phone. In a branch or with an independent RIA. First-timer or sophisticated trader. Our clients want to take control, and we help them decide how – bringing Wall Street to Main Street for more than 40 years. TD Ameritrade has time and again been recognized as a leader in investment services. Please visit TD Ameritrade’s newsroom or websiteÂ for more information, or read our stories at Fresh Accounts.

About the 2016 Parents and Grandparents Retirement Survey
A 18-minute online survey was conducted with 2,018 American adults (half millennial parents age 19-37, half grandparents age 50-70 with adult children) by Head Solutions Group, between Oct. 20 and Oct. 26, 2016, on behalf of TD Ameritrade Holding Corporation. The statistical margin of error for the total sample of N=2,018 American adults within the target group is +/- 2.1 percent. This means that in 19 out of 20 cases, survey results will differ by no more than 2.1 percentage points in either direction from what would have been obtained by the opinions of all target group members in the United States. Sample was drawn from major regions in proportion to the U.S. Census.