How many US residents face health and health care-related vulnerabilities

A new survey from Transamerica offers insights and comparisons of rural, urban, and suburban residents. Access the survey here. 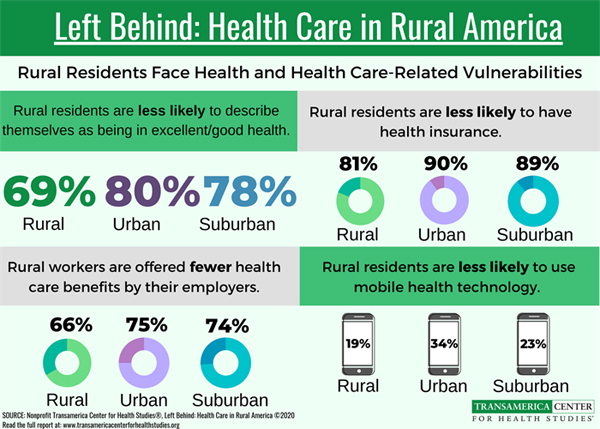 Only 69 percent of rural residents describe themselves as being in âexcellentâ or âgoodâ health, which is less than what is reported by urban (80 percent) and suburban (78 percent) residents, according to Left Behind: Health Care in Rural America, a new study released today by nonprofit Transamerica Center for Health StudiesÂ® (TCHS).

Based on the 7th Annual TCHS Consumer Health Care Survey, conducted in August 2019 among 3,760 U.S. residents age 18 to 64, the new study illuminates the health and health care-related risks among rural residents and offers comparisons with urban and suburban residents.

âMuch of the attention surrounding the COVID-19 pandemic has focused primarily on cities and larger metropolitan areas. We also need to focus on rural areas and the unique vulnerabilities their residents are facing,â said Christopher Wells, national program manager for TCHS.

Health care in rural areas is often less accessible than in urban and suburban areas for a number of reasons, including fewer hospitals to reach medical professionals and longer travel times to health facilities. In addition, the survey findings point to other potential systemic issues:

âEmployers across all regions of the country play a crucial role in providing workers with health insurance coverage and workplace wellness programs, but in rural areas, this is happening to a lesser extent,â Wells said.

The survey findings identify ways rural residents can potentially improve their health and their ability to navigate the health care system:

At an individual level, it is extremely important that rural residents be hyper-vigilant in safeguarding their health and follow the CDCâs recommendations for taking precautionary measures, such as social distancing, wearing a mask, and frequent hand washing...

âEven before COVID-19, many rural residents faced health and health care-related risks. The pandemic greatly magnifies these risks. At a societal level, more can and should be done to enhance the accessibility and affordability of health care,â said Wells. âAt an individual level, it is extremely important that rural residents be hyper-vigilant in safeguarding their health and follow the CDCâs recommendations for taking precautionary measures, such as social distancing, wearing a mask, and frequent hand washing.â 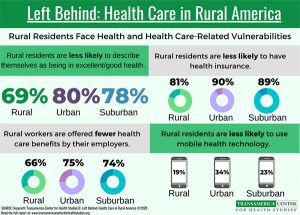 About Transamerica Center for Health Studies
Transamerica Center for Health StudiesÂ® (TCHS) is a division of Transamerica InstituteÂ®, (TI) a nonprofit, private foundation. TCHS is focused on empowering consumers and employers to achieve the best value and protection from their health coverage, as well as the best outcomes in their personal health and wellness. TCHS engages with the American public through national surveys, research findings, and consumer guidance. TCHS also collaborates with healthcare experts and organizations that are equally focused on health coverage and personal health and wellness. TI is funded by contributions from Transamerica Life Insurance Company and its affiliates, as well as unaffiliated third parties. None of the contributors are major medical insurers. TCHS and TI and their representatives cannot give ERISA, tax, or legal advice, and TCHS is not an agent of any government agency including, but not limited to, state or federal health benefit exchanges.

About the 7th Annual TCHS Consumer Health Care Survey
The analysis contained in Left Behind: Health Care in Rural America was prepared internally by the research team at TCHS. A self-administered online survey was conducted by The Harris Poll on behalf of TCHS among a nationally representative sample of 3,760 U.S. adults (ages 18-64), from August 7th to August 19th, 2019. Figures for education, age by gender, region, and household income were weighted where necessary to align them with the population of U.S. residents ages 18-64. A separate weight was created for U.S. residents ages 18-64 by age (Millennials and Generation Z), by ethnicity, for those who are currently uninsured, and for those who are employed, and then combined into a total General Population sample. A full methodology is available in the report.