Jimmy Fallon Shouldnât be the Only One Writing Thank You Notes!

Have you ever considered sending a handwritten noteÂ to thank a prospectÂ for hanging up on you? 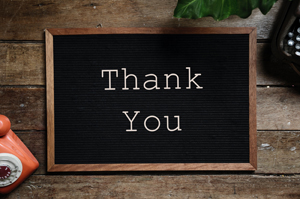 Mr. Silverman is Principal and Owner of Silverman Benefits Group (SBG). Connect with him by e-mail: [email protected]

One of my favorite comedy bits on the new Tonight Show Starring Jimmy Fallon is his Friday night âthank you notesâ segment. Sure, theyâre hilarious and witty, and the musical interaction with his band member and his co-host is comedy gold, but what I like most is that Jimmy hand writes each note one-by-one.

Riddle me this: You just had a terrific phone conversation with a new prospect but you failed to book an appointment with them. Now what? Have you ever considered sending a handwritten note to essentially thank them for hanging up on you?

While cutting my teeth in the employee benefits world during my college internship, I was fortunate enough to have the most consummate sales professional as my first mentor. David had taken every sales course out there, from flying across the country to walk on hot coals with Tony Robbins, to reading the most cutting-edge sales books written by every industry guru. David was always preaching âthe art of the handwritten thank you noteâ and how it can be used for everything from prospecting initial appointments to showing after the sale appreciation, and everything in between.

After just being hung up on, David asked me what happened. After all, he had heard me on the phone having, what sounded like to him, a solid conversation with a potential new client. I told him that the prospect seemed interested, but still hung up on me. His response was priceless: âThatâs great, letâs send him a thank you note!â

I thought he was joking, of course, but I soon realized he had never been more serious. Being the young and green sales intern that I was, I figured I would appease him and give it a try, after all, I was coachable and what did I have to lose other than a few minutes writing it out and a 34-cent stamp?

So, you failed to book an appointment... Now what? Have you ever considered sending a handwritten note to essentially thank them for hanging up on you?

I called my prospect back later that week and the gatekeeper asked if he was expecting my call. My answer was, âyes,â because I wrote in my note to please âexpect and acceptâ my call. To my surprise, my prospect picked up the phone and I booked the appointment! Now this wonât happen every time, of course, but imagine if it happened just a few times a month? How many extra appointments would you book? How many extra accounts would you close?

After booking the appointment, I proceeded to write him another note to thank him for taking my call again and for agreeing to meet with me. It also served as a way to confirm our appointment by reminding him of the date and time of our meeting.

Since I was still so green in the business, I asked David to come along and help me close the deal. Sitting down in my prospectâs office, he only had two things neatly positioned on his desk â my thank you notes. Before we began our chat, he started the meeting by telling us how lazy his sales people are and how they only send emails. He said that he wished he could get his sales people to take the time to write handwritten notes like I did with him and he even acknowledged how impressed he was with my first note, since it was sent after he had admittedly hung up on me. He continued to say that if what we had to offer was even half as good as what I had told him over the phone, that Iâd have a new client and could thank my handwritten notes for it. We closed the deal that morning and they still remain a client to this very day.

Do I have the handwritten thank you notes to thank for that new deal? Perhaps, but I would more thank David for giving me such sage advice.

Curious as to what I wrote in my thank you note that helped secure my appointment? Be sure to share my story on LinkedIn, Facebook, and Twitter â donât forget to leave your feedback and tag me, and as a thank you, Iâm glad to share my âmagicâ thank you note! â