$20b of unfunded pension liabilities is key, but others large cities may be poised to follow 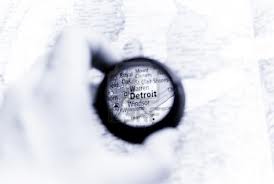 âWith Detroitâs bankruptcy filing (the nationâs largest government bankruptcy in history) a debate is emerging whether this is specific to Detroit or a sign of more trouble to come,â says James Frischling, President and Co-Founder of NewOak.

Those that argue Detroitâs bankruptcy is unique are focused on population decline, the auto industry and mismanagement of operating budgets. Detroitâs population dwindled over the past 60 years from a high of 1.8 million in the 1950s to less than half that number today. The economic situation has been particularly brutal on Detroit, compounded by the fact that it has an over-reliance and dependence on the auto-industry. Finally, to meet the obligations of its pensions and health insurance and as a result of the declining tax revenues, the city borrowed heavily to meet its operating budgets. All of this has brought Detroit to its Chapter 9 filing.

Municipal bond investors have been pulling money from muni market funds for eight consecutive weeks, including nearly $1.5 billion last week. The Barclays Municipal Bond Index is down 2.7% thus far this year and issuance is down 10% from the same period last year.

Michigan is being criticized for failing to provide sufficient help for Detroit, so the question of contagion will also weigh on how other states will manage its troubled cities

Michigan is being criticized for failing to provide sufficient help for Detroit, so the question of contagion will also weigh on how other states will manage its troubled cities. The Federal government could step in with support, but thatâs a Pandoraâs Box that is too dangerous to open. Detroit filed because theyâre on their own and had no choice. Whoâs next?

âThe two sectors, in turn, have contributed greatly to the stabilization of manufacturing sector which has previously been a weakness to U.S. economic growth.â

âEconomists forecast the sales of previously owned homes will rise from 5.18 million to 5.26 million annualized rate in June from 5.18 million in May. The continued recovery and normalization of the housing sector and rising construction is essential to the entire economic expansion. However, the housing improvements momentum is not certain. For the foreseeable future, housing, construction and auto sectorsâ expansion will be highly sensitive and contingent on the low interest rates and the Federal Reserveâs QE policies.â

âWhile short term momentum will be positive, the risk is that the inevitably higher mortgage rates will dampen the housing growth as well as add to the market volatility. This risk has been the main reason Bernanke and other Federal Reserve board members tried to calm the market by reiterating their cautious stance and willingness to push out the tapering of QE 3 until economy has shown real sign of health.â