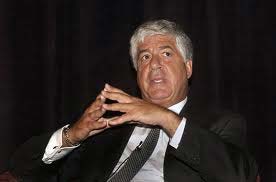 WASHINGTON, D.C. â The Insured Retirement Institute (IRI) today recognized five industry leaders for their service to the organization and their contributions to the retirement income industry.

The IRI Hall of Fame Award recognizes industry leaders who exercise outstanding leadership and vision, and whose work has helped advance the retirement income industry. The IRI Leadership Award honors leaders whose dedicated service and contributions to IRI has supported the organization in achieving its mission. Both awards were presented during a ceremony today at VISION: IRI Annual Meeting 2015.

IRI posthumously recognized Robert Benmosche with an IRI Hall of Fame Award. He served as President and CEO of AIG from 2009 to 2014, and as Chairman of the Board and CEO of MetLife from 1998 to 2006. During his tenure as CEO of AIG, Mr. Benmosche was credited with leading one of the greatest turnarounds in U.S. corporate history. As CEO of MetLife, he oversaw the companyâs transition from a mutual insurance company to a publicly traded company. He first became involved with the industry as a senior executive with Paine Webber, where he had an important part in the development and promotion of variable annuities. After a short time, the firm was producing the highest variable annuity sales in the wirehouse community. Before his passing in February 2015, Mr. Benmosche was an energetic supporter of IRI and its mission. Over the course of his career, he encouraged both AIG and MetLife to support the organization, and provided the industry keynote during IRIâs 2011 Marketing Conference. With his support, many of Mr. Benmoscheâs AIG and MetLife colleagues served in key leadership posts for IRI, including several IRI Board members and numerous committee members.

IRI presented Mary Ann Brown, Executive Vice President for Pacific Life Insurance Company and CEO of Pacific Select Fund and Pacific Funds, with an IRI Hall of Fame Award. In her current position, she is also responsible for overseeing corporate information technology, enterprise risk management, and Pacific Lifeâs international reinsurance subsidiary, Pacific Life Re. Her tenure in the industry began as an actuary with Canada Life Assurance in 1980, and afterwards she consulted for Tillinghast/Towers Perrin as the lead Principal for variable life and annuities. Ms. Brown joined Swiss Re New Markets in 1996 as Director of Worldwide Life Reinsurance and CEO of Atlantic International Reinsurance Company. In 1998, she joined MetLife as President of New England Products and Services, overseeing product management for individual life, annuity and small group products for all MetLife companies. She was appointed Chief Actuary of MetLife in 2002. Ms. Brown was a member of the IRI Board of Directors, then known as NAVA, from 2000 to 2007 and served as Board Chairman from 2004 to 2005.

IRI honored Mark Casady, Chairman of the Board and CEO of LPL Financial, with an IRI Hall of Fame Award. Under Mr. Casadyâs leadership, the firm has become a leader in serving independent financial advisors, banks and credit unions and providing clearing services to broker-dealers. He joined the firm in 2002 as Chief Operating Officer, and became CEO in 2004 and Chairman in 2005. Among other industry groups and board positions, Mr. Casady recently served on the Board of Governors of the Financial Industry Regulatory Authority (FINRA). He became Chairman of the IRI Board of Directors, then known as NAVA, in 2008. During his tenure as Chairman, Mr. Casady was a catalyst for rebranding the association and undertook an initiative to transform the organizationâs mission and objectives. In partnership with the Board, he worked to broaden IRIâs membership to encompass the entire supply chain of insured retirement strategies and to expand the associationâs mission to focus on advocacy, education and research. Mr. Casady also continues to set the tone for deep and sustained support of IRI at both the advisor and corporate levels of LPL Financial.

The IRI Hall of Fame Award recognizes industry leaders who exercise outstanding leadership and vision, and whose work has helped advance the retirement income industry

IRI recognized Robert Moore, CEO of Legal & General Investment Management America (LGIMA), with an IRI Leadership Award. He became CEO of LGIMA in March 2015, after serving as President of LPL Financial, where he oversaw the companyâs primary client-facing functions, client service and operations teams. He first joined LPL Financial as CFO in 2008. During the past four years, he has served IRI as a member of the Board of Directors. This includes time served as Chairman, a post in which he demonstrated tremendous leadership by encouraging and channeling the contributions of other Board members, member companies and coalition partners to address important retirement security advocacy issues. Mr. Moore also was instrumental in establishing and leading the IRI Advisor Council. The formation of this group has allowed IRI to gain perspectives on advisorsâ attitudes and use of retirement income strategies, grow its affinity in the advisor community, and gather advisor feedback to help shape advocacy positions. Through his dedicated service and vision, IRI also has become a catalyst for change and continuous improvement in the retirement income industry.

IRI presented an IRI Leadership Award to Deborah Seabury, Vice President, Senior Strategic Account Manager, AIG Financial Distributors. In this post, she is responsible for the representation of variable, fixed, and indexed annuities with several independent channel firms. Before joining AIG in 2006, Ms. Seabury served as First Vice President, Senior Relationship Manager, with Prudential Financial, and Second Vice President, Director of Relationship Management, with the Lincoln National Life Insurance Company. Her dedication and commitment to IRI includes innumerable hours served on the Board of Directors and various IRI committees since the inception of the association in 1992. During more than 20 years of volunteerism to IRI, she demonstrated tremendous leadership by chairing the Operations and Technology Committee for five years â helping to advance straight through processing (STP) initiatives. Her dedication to IRI also includes serving as Chair of the Member Services Committee and her participation on more than a dozen Conference Planning Committees, including chairing the Operations and Technology Conference Planning Committee for two years.