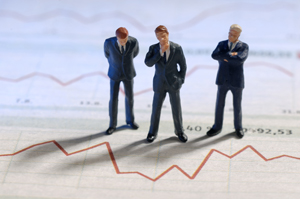 April 09, 2018 —Â OMAHA, Neb.–(BUSINESS WIRE)–The March 2018 Investor Movement IndexÂ® hit its lowest point in nearly two years, dropping 12 percent from the month prior to 5.22, TD Ameritrade, Inc.1 announced today. The Investor Movement Index, or the IMXSM, is a proprietary, behavior-based index created by TD Ameritrade that aggregates Main Street investor positions and activity to measure what investors actually were doing and how they were positioned in the markets.

As volatility shook up the market, TD Ameritrade clients seemed to display optimism in the state of the economy by continuing net buying activity in March. Despite being net buyers, client accounts experienced reduced exposure to equity markets as relative volatility in widely held names, including Amazon Inc. (AMZN) and General Electric Co. (GE), decreased during the month.

âMarchâs market sell-off continued with news of a potential trade war between the U.S. and China, followed by a data breach involving Facebook that impacted millions of users,â said JJ Kinahan, chief market strategist at TD Ameritrade. âClients navigated the markets by dialing back exposure and rotating out of popular stocks – such as Facebook – which has been a primary holding for many clients including millennials.â

Despite being net buyers, TD Ameritrade clients found equities to sell during the period, including:

While market indices stabilized at the start of April, ongoing news about tariff threats continued to drive market volatility. As investors figure out how to position themselves for the rest of April, they will look for guidance from corporate earnings. In particular, earnings conference calls will be a focus as CEOs share their input on the economy and consumer demand.

âBased on geopolitical statements, there is no reason to believe that volatility will significantly stop throughout the next month given the time frames on tariffs,â said JJ Kinahan, chief market strategist at TD Ameritrade. âWe will most likely not see any certainty out of what will actually be implemented until well after April.â

The IMX value is calculated based on a complex proprietary formula. Each month, TD Ameritrade pulls a sample from its client base of 11 million funded accounts, which includes all accounts that completed a trade in the past month. The holdings and positions of this statistically significant sample are evaluated to calculate individual scores, and the median of those scores represents the monthly IMX.

For more information on the Investor Movement Index, including historical IMX data going back to December 2010; to view the full report from March 2018; or to sign up for future IMX news alerts, please visit www.tdameritrade.com/IMX. Additionally, TD Ameritrade clients can chart the IMX using the symbol $IMX in either the thinkorswimÂ® or TD Ameritrade Mobile Trader platforms.

About TD Ameritrade Holding Corporation
Millions of investors and independent registered investment advisors (RIAs) have turned to TD Ameritradeâs (Nasdaq: AMTD) technology, people and education to help make investing and trading easier to understand and do. Online or over the phone. In a branch or with an independent RIA. First-timer or sophisticated trader. Our clients want to take control, and we help them decide how â bringing Wall Street to Main Street for more than 40 years. TD Ameritrade has time and again been recognized as a leader in investment services. Please visit TD Ameritradeâs newsroom or www.amtd.com for more information.