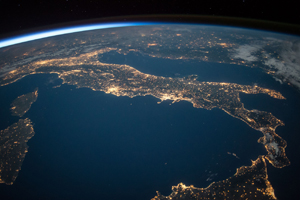 PALM BEACH, Fla., May 13, 2022 /PRNewswire/ — The ‘Space-as-a-service’, ‘Satellite-as-a-service’ and ‘Space Data as a Service’ are the newest business models of Space Industry, according to a recent report from International Defense, Security & Technology Inc (IDST).

They said that the modern space industry is witnessing exponential growth in small satellite and nanosatellite areas. Nanosatellite and microsatellite refer to miniaturized satellites in terms of size and weight, in the range of 1-10 Kg and 10-100 kg, respectively. ‘CubeSat’ is one of the most popular types of miniaturized satellites. These are the fastest-growing segments in the satellite industry. It is expected that the numbers of satellites in orbit are going to increase more than linearly with about 8000 spacecraft in orbit in 2024 due to constellations only. Over 2500 nanosats are estimated to be launched in 2021-2027.

The report said: “The growth in small satellites is driven by the miniaturization of electronics and sensors and the availability of high-performance commercial off-the-shelf components, significantly reducing the cost of hardware development. The other rationale for miniaturizing satellites is to reduce the launch cost; heavier satellites require larger rockets with a greater thrust that also have a greater cost to finance. In contrast, smaller and lighter satellites require smaller and cheaper launch vehicles and can sometimes be launched in multiples. The access to orbit and economy of these spacecraft is also improved through the availability of secondary launch payload opportunities, especially for small satellites which conform to standardized form factors. They can be launched ‘piggyback’, using excess capacity on larger launch vehicles.” Active companies in the markets this week include Sidus Space, Inc. (NASDAQ: SIDU), Tesla, Inc. (NASDAQ: TSLA), Amazon.com, Inc. (NASDAQ: AMZN), Lockheed Martin Corporation (NYSE: LMT), Virgin Galactic Holdings, Inc. (NYSE: SPCE).

The report continued: “As the space sector expands, companies large and small are adopting new business models, including Space Data as a Service, Satellite as a Service and Ground Station as a Service. These new models are emerging as the space sector is witnessing large commercialization of satellite applications, which has opened new opportunities through the use of small satellites, on-orbit servicing, and low Earth orbit constellations. These services promise the benefits of space without the demands of satellite manufacturing, government regulations, launch integration or space data delivery. The software technology sector has been shifting from an upfront customer purchase to a service model â Software-as-a-Service (SaaS) â for years now. Using the cloud and a baseline subscription service model, the sector achieves steady recurring revenue, high customer renewal, and scalability. In turn, customers access the exact solutions they need, avoiding upfront costs and risks. One of the most successful variants in the SaaS market is called “vertical software,” which focuses offerings on very specific industry segments such as healthcare or construction. The space sector is beginning to catch up to some of these trends in the wider technology arena, beginning with the purchase of subscription services (OpEx) rather than the purchase of hardware (CapEx).â

“As we delivered on previously announced contracts, our revenues increased dramatically. We believe that we are well-positioned to compete with legacy space-based data providers and other emergent providers due to our vertical integration strategy that combines rapid production with flexible technology insertion points. While readying for launching numerous satellites over the next 12-24 months, we anticipate our backlog to continue to increase. The company, built on years of experience manufacturing for commercial, military and government customers, has positioned itself to become one of the leading companies in the low earth orbit (LEO) satellite industry. We believe the LizzieSat constellation of satellites will level the playing field by bringing space down to earth for everyone and making access easier for all consumers,” commented Carol Craig, Founder and CEO of Sidus Space.

Other recent developments in the marketts of note include:

Tesla, Inc. (NASDAQ:TSLA) – Morgan Stanley said that Most “institutional investors and industry experts” surveyed by Morgan Stanley expect SpaceX to become more valuable than Tesla and see it as a more attractive investment. Elon Musk’s two largest companies already command enormous valuations, with Tesla currently at $858 billion and SpaceX at $100.3 billion. “From our investor conversations, the sentiment on SpaceX has increased substantially along with the company’s valuation in the private market,” Morgan Stanley analyst Adam Jonas wrote in a note.

These new models are emerging as the space sector is witnessing large commercialization of satellite applications, which has opened new opportunities through the use of small satellites, on-orbit servicing, and low Earth orbit constellations...

Between Elon Musk’s two largest companies, investors and experts have a long-term favorite. Most “institutional investors and industry experts” surveyed by Morgan Stanley expect SpaceX to become more valuable than Tesla and see it as a more attractive investment. “The majority of our clients (by survey and client discussions) believe SpaceX could ultimately command a higher valuation and significance than even Tesla,” Morgan Stanley analyst Adam Jonas wrote in a note Tuesday.

“Lockheed Martin had a solid start to the year by delivering margin expansion and free cash flow above our expectations despite recent Covid-surge impacts on our operations and supply chain. We remain confident in our guidance for the remainder of the year and our growth outlook beyond,” said Lockheed Martin Chairman, President and CEO James Taiclet.

“We are executing on our plans to scale the business by developing our future fleet, investing in digital manufacturing technologies, and building out our commercial strategy to deliver a consumer experience like no other,” said Michael Colglazier, Chief Executive Officer of Virgin Galactic. “Against a backdrop of escalating supply chain and labor constraints, our teams are containing the majority of these issues to minimize impact on schedules. We look forward to returning to space in the fourth quarter and launching commercial service in the first quarter of next year.â

First Quarter 2022 Business Highlights Were: In January 2022, completed a convertible debt offering that resulted in $425 million in gross proceeds to the Company. $52.3 million of net proceeds were used to fund the cost of capped call premiums related to the transaction. The remainder of net proceeds are expected to be used to fund working capital, general and administrative matters, and capital expenditures to accelerate the development of the Delta class spaceship fleet and next generation motherships.

FN Media Group LLC (FNM), which owns and operates FinancialNewsMedia.com and MarketNewsUpdates.com, is a third party publisher and news dissemination service provider, which disseminates electronic information through multiple online media channels. FNM is NOT affiliated in any manner with any company mentioned herein. FNM and its affiliated companies are a news dissemination solutions provider and are NOT a registered broker/dealer/analyst/adviser, holds no investment licenses and may NOT sell, offer to sell or offer to buy any security. FNM’s market updates, news alerts and corporate profiles are NOT a solicitation or recommendation to buy, sell or hold securities. The material in this release is intended to be strictly informational and is NEVER to be construed or interpreted as research material. All readers are strongly urged to perform research and due diligence on their own and consult a licensed financial professional before considering any level of investing in stocks. All material included herein is republished content and details which were previously disseminated by the companies mentioned in this release. FNM is not liable for any investment decisions by its readers or subscribers. Investors are cautioned that they may lose all or a portion of their investment when investing in stocks. For current services performed FNM expects to be compensated forty five hundred dollars for news coverage of the current press releases issued by Sidus Space, Inc. by the company. FNM HOLDS NO SHARES OF ANY COMPANY NAMED IN THIS RELEASE.