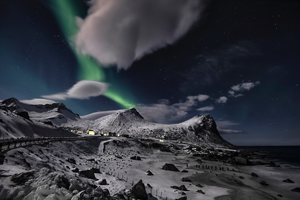 NEW YORK–(BUSINESS WIRE)–The real assets news site Investable Universe announces the launch of Polar Futures, a media series that examines the eight-nation Arctic regionâs growing geopolitical importance and its potential for attracting hundreds of billions of dollars in direct investment to develop the region and its bounty of natural resources.

Institutional investors, pension funds and other investors are eyeing the potential of developing infrastructure, shipping, logistics, telecommunications, mining, aquaculture and marine resources and of incubating technologies that aid the transition to renewable energy.

Against this fluid strategic backdrop, the weekly newsletter and podcast series, curated by editor-in-chief Rebecca Engmann Darst, will feature interviews with pivotal figures in the Arctic discourse, including:

The polar regionâs strategic value is hard to overstate. It holds vast natural and mineral resources and is developing new and high-tech industries in parallel to those riches...

The series also will include insights about the roles of Canada, Finland, Norway, Russia and Sweden in the rapidly evolving Arctic zone.

Subscribers will gain exclusive access to nuanced transnational views of the polar investment and geopolitical landscape through a weekly newsletter and podcast interviews with guests from across the diplomatic, media and entrepreneurial spectrum.

Will Globalization and Climate Change Spur Great-Power Rivalry in the Arctic?

Noting that research from the Council on Foreign Relations examined the Arctic as a potential site for âthe return of great-power rivalryâ[1] amid the challenges of globalization and climate change, Darst believes that the Arctic North will be the nexus of a number of conflicts and opportunities in the twenty-first century.

âThe polar regionâs strategic value is hard to overstate. It holds vast natural and mineral resources and is developing new and high-tech industries in parallel to those riches. Yet in the region, thereâs also an intricate tapestry of historical and cultural factors that are rarely discussed on a global level. We will delve unflinchingly into all of them in the newsletter and podcast,â says Darst.

Subscribe to the Polar Futures newsletter and podcast bundle at www.investableuniverse.com/polarfutures.

Trofast Mediaâs Investable Universe provides leading edge insights into investment in real assets, the global âmarket of thingsâ that spans traditional investments and emerging technologies on earth and in space.