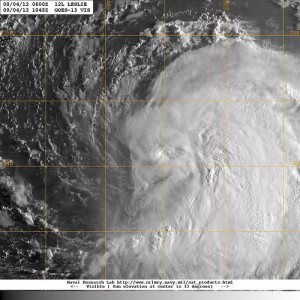 âIsaac made two separate landfalls, both as a Category 1 hurricane,â said Dr. Tim Doggett, principal scientist at AIR Worldwide. âThe first occurred on August 28 at low-lying Plaquemines Parish, Louisiana, at around 7:45 PM CDT. Instead of continuing inland as expected, the storm veered sharply to the southwest and re-emerged over the water, which allowed it to maintain its strength. It then made a second landfall on the morning of August 29 just west of Port Fourchon, Louisiana, at around 2:15 AM CDT.â

âInland flooding from continuing precipitation remains a risk and isolated tornadoes may still be spawned by the storm,â continued Dr. Doggett. âTotal rainfall accumulations of 7 to 14 inches are expected, with isolated amounts up to 25 inches.â

Damage reports have mostly been focused on the flooding caused by Isaac’s precipitation shield and slow movement. Nearly eight inches of rain were reported at the New Orleans International Airport yesterday. Much of the worst flooding occurred in Plaquemines Parish, Louisiana, where a combination of storm surge and rainfall caused water to top the earthen levees.

Wind damage has been less extensively reported. âHowever, Isaacâs slow forward speed and refusal to dissipate will exacerbate wind damage,â commented Dr. Doggett. âAs the winds persist, roof fasteners and connections can become fatigued and overloaded causing additional damage, and the possibility of damage from flying building debris persists. It should also be noted that with soils heavily saturated by rain, trees can be downed by much lower wind speeds than would otherwise be necessary.â

Downed power lines, trees and other infrastructure are being reported over much of southern Louisiana and Mississippi. Some structural damage is being reported in New Orleans and the surrounding area, mostly limited to roof damage and to non-structural elements such as awnings, signage, and trailers.

AIR does not expect significant physical damage to offshore oil rigs and gas platforms either from wind or waves. Furthermore, as a result of the Gulf hurricanes of 2005 (Katrina, Rita and Wilma), Hurricane Gustav in 2008, and the Deepwater Horizon disaster of 2010, business interruption is a much rarer coverage than in years past. Therefore, AIR does not expect significant insured losses to offshore assets in the Gulf of Mexico as a result of Isaac.

"... [no] significant physical damage to offshore oil rigs and gas platforms either from wind or waves."

About AIR Worldwide
AIR Worldwide (AIR) is the scientific leader and most respected provider of risk modeling software and consulting services. AIR founded the catastrophe modeling industry in 1987 and today models the risk from natural catastrophes and terrorism in more than 90 countries. More than 400 insurance, reinsurance, financial, corporate, and government clients rely on AIR software and services for catastrophe risk management, insurance-linked securities, detailed site-specific wind and seismic engineering analyses, and agricultural risk management. AIR is a member of the Verisk Insurance Solutions group at Verisk Analytics (Nasdaq:VRSK) and is headquartered in Boston with additional offices in North America, Europe, and Asia. For more information, please visitÂ www.air-worldwide.com.