How will inflation affect debt/GDP ratios?

The new report focusing on inflation impacts on sovereigns was conducted and presented by Fitch Ratings.

Higher levels of global government debt as a result of the coronavirus pandemic have made sovereign creditworthiness increasingly sensitive to interest rate changes. Base effects, higher commodity prices, idiosyncratic effects of sectoral re-openings and pandemic-related supply-side disruption are contributing to higher inflation in many countries. Nevertheless, most central banks are taking the view that the rise in inflation will not last, and that now is not the right time to tighten financial conditions.

Longer-term rates matter more than policy rates for fiscal outcomes and debt sustainability, and there is no convincing evidence yet that bond markets disagree with central banksâ inflation diagnosis. The US 10-year Treasury yield â the most important benchmark for global sovereign borrowing conditions â has been below 1.7% since early April. Relatively stable country-specific benchmark sovereign yields are currently the rule rather than the exception. 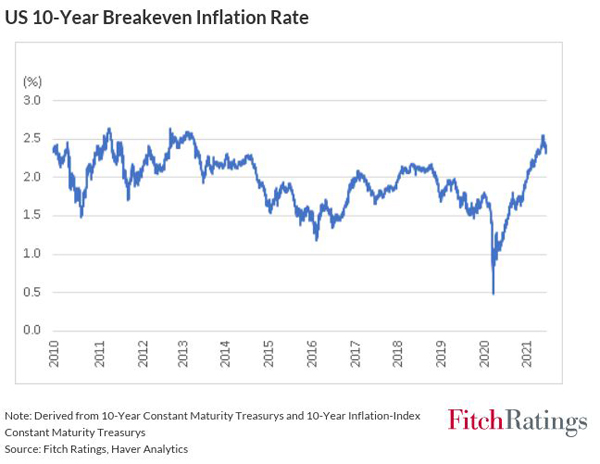 Fitch believes US inflation and bond yields will rise in the medium term, as higher inflation is a stated policy objective and the Fed will only react ex post. We forecast US inflation to be 2.5% at end-2023 and 10-year Treasuries to yield 2.3%, which is still low in a historical context relative to our nominal GDP projection of more than 4%. We expect global yields to follow US yields higher, though Japan has shown low yields can persist on country-specific factors for an extended period.

Higher inflation leads to higher nominal GDP, resulting in an immediate improvement in debt/GDP ratios; âinflating debt awayâ. This is particularly the case if â as presently â there is a muted response from benchmark yields to higher inflation, thus lowering governmentsâ real marginal borrowing costs. Even if benchmark yields rise in tandem with inflation and nominal GDP growth, it will take time for the effective (or average) cost of borrowing to catch up with the higher marginal cost, particularly for sovereigns with long average debt maturities. All else being equal, these inflation conditions are positive for sovereign credit.

Longer-term rates matter more than policy rates for fiscal outcomes and debt sustainability, and there is no convincing evidence yet that bond markets disagree with central banksâ inflation diagnosis...

However, should inflation prove more persistent than transitory, markets may demand higher yields to compensate for greater uncertainty around inflation outcomes. Increases in benchmark yields and corresponding effective rates may exceed the rise in inflation, meaning higher real interest rates for governments. In this case interest payments on government debt will, all else being equal, rise more rapidly than nominal GDP and the numerator of the debt/GDP ratio will rise relative to the denominator, diminishing sovereign creditworthiness.

Both policy-rate decisions and adjustments to quantitative easing (QE) strategies may affect bond yields. The QE policies of the US Federal Reserve and ECB have received the most attention, but higher inflation will also spur discussion around programs being wound down in emerging markets. Sovereign bond yields generally fell in emerging markets on QE announcements, implying that there is a risk of symmetric market reactions to exit strategy announcements.

Interactions between inflation, policy and market interest rates, as well as QE, can also affect exchange rates, which are particularly important for emerging marketsâ government debt sustainability. QE in emerging markets has been limited to jurisdictions with larger and more sophisticated domestic bond markets, upon which governments rely for funding, reducing the importance of exchange rates to public debt dynamics. However, few emerging market sovereigns are entirely immune from exchange-rate risk, so investors will need to monitor carefully QE exit strategies and relative monetary policy postures more generally.