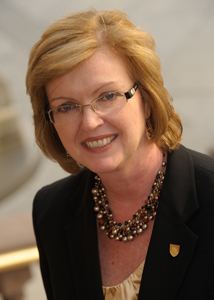 The Penn Mutual Life Insurance Company recently endowed the Center for Veterans Affairs at The American College. We spoke with Penn Mutual president and CEO Eileen McDonnellÂ about this initiative to bolster the ranks of advisors and assist military veterans with new careers in civilian life.

L&HA: The American College gave you its Presidentâs Award this year. In what capacities have you served the College?
EM: I received the Presidentâs Award for my long term commitment to the College but also for my ability to help them advance the Penn Mutual Center for Veterans Affairs. That was a great honor to accept this award on behalf of all our associates here at Penn Mutual. Iâve had a long-standing relationship with the American College personally as has Penn Mutual. Before joining Penn Mutual, I served on the masterâs faculty at the College and taught the leadership course. I held the newly endowed State Farm Chair for Women in Financial Services where I did extensive research around the issues women face about longevity and employment, family life, and financial matters.

L&HA: Why did Penn Mutual partner with The American College around the veterans initiative?
EM: In my 25 years in the industry, I have noted that service in the U. S. military is a common theme for the industry greats at the field leadership level as well as for our top producers. (Thatâs a personal observation, not scientific evidence.) We need to solve how you grow the advisor base when we have had a multi-decade slide. With our troops coming back from deployment, we are bringing a highly educated, skilled military back into a high unemployment rate. Our industry will be a great fit for them. Thatâs the vision for the Penn Mutual Center for Veterans Affairs.

L&HA: I understand the first scholarship recipients have been chosen.
EM: We are providing up to 50 scholarships this year alone, and there will be more going forward. Iâve had a chance to meet two of our first designees, Joseph Voellm from the Virginia area and Kuan-Yin Hamlet from New York. Both are Wounded Warriors.

L&HA: Are these veterans coming in with any prior experience in financial services?
EM: Most recipients are new to financial services. Others have had some prior interest in the industry or are making transitions from other parts of financial services. Candidates often have 15 or 20 years experience coming out of the military. This bodes well because the average age of advisors is somewhere in their late 50s, while the Census shows the average U. S. worker is 37 years old. Thatâs a 20-year gap of relevance for the life insurance industry as an employer. Veterans represent a tremendous opportunity with the skills and experience they bring.

L&HA: Supporting the men and women of our armed forces seems to be consistent with Penn Mutualâs values.
EM: We want to educate veterans, but we also want to move them into gainful employment. These folks will be welcomed into the industry and exposed to many facets so they can then make a decision about which company they want to affiliate with. The first scholarship recipient will be mentored by a recently retired, Penn Mutual managing partner. We know this veteran will have a greater chance of success if he has a mentor from the start.

"The rate of change brought on by todayâs digital environment will prod the industry to rethink how we define relationships and how we connect with our customers."

Our home office and field force are excited and energized about giving back to those who have given so much to our country. Hereâs another example. At our meeting last year for top producers in Washington D. C., one of the opportunities we offered was a volunteer experience. A group went out to the Lincoln Cottage Soldiersâ Home and did the spring cleanup. We had afternoon tea with residents and passed out gifts.

L&HA: Penn Mutual is sponsoring the Maurice L. Stewart Lecture Series at The American College. Maury has been quoted as saying, âYou get into the life insurance business, and then the life insurance business gets into you.â Have you found that to be true?
EM: To me itâs not a job; itâs part of who I am and what I stand for. This is an industry that most people come into by accident, but they stay in it because they develop a tremendous passion for the business. I am always advocating for what we stand for, really trying to educate people around the value that life insurance, in particular permanent life insurance, should be playing in their lives.
Maury was a very successful field leader in our company for many years and this lecture series will focus on leadership development. Maury is now retired and is an executive consultant with Penn Mutual. Many of the principles that made him successful are ageless and timeless. He is an important member of my team.

L&HA: Penn Mutual seems to be a company of possibilities and values. Is this rare in corporate culture and does it come down from the top?
EM: Tone at the top matters, but I walked into an organization at Penn Mutual that was optimistic and that believed in all the possibilities permanent life insurance has to offer through a lifetime. Over the last three years we have doubled the number of producers we have and tripled net income by refocusing on the basics. In early 2008 when I came on board Penn Mutual was a financially strong organization but the time was right to take it to the next level. In September, the bottom fell out of the economy. I stood in front of our field leaders and told them Penn Mutual was not going to participate in the recession. We would focus on the things we could do within our control, and if we played to our strengths, the other things would work themselves out. Weâve been heads-down around that going into our fourth year.

L&HA: What do you see coming down the pike for the industry and Penn Mutual?
EM: The future is bright. According to LIMRA, 80 percent of people surveyed about life insurance ownership, those that have personal experience either from a death benefit perspective or utilization of cash value, are feeling confident about life insurance and the life insurance companies they work with. That bodes very well and it tells us we need to do a better job of telling those stories. Itâs not a matter of IF itâs a matter of WHEN. Weâre going to have to deploy different methods. The rate of change brought on by todayâs digital environment will prod the industry to rethink how we define relationships and how we connect with our customers. Thatâs an exciting next chapter for the industry.