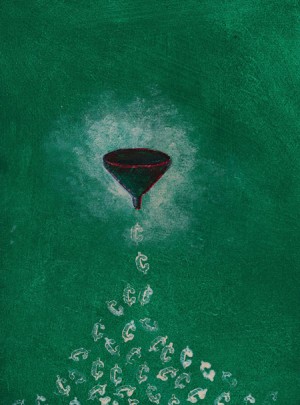 Mr. Cormier is CEO of Boston Research Group, with concentrated expertise in financial services, specifically investment companies (both retail and institutional clients), banks, and insurance companies. Connect with him by e-mail: [email protected]

Less well understood, however, is that:

A staggering 45 percent of participants choose to cash out their accounts and drop out of the DC system every year. For participants with less than $5,000, the rate soars to 55 percent. Over 10 years, excessive cashouts (i.e. those not required for hardship purposes), will remove $1.3 trillion from the systemâs collective future retirement income streams. By those numbers and most common sense standards, leakage is a huge problem.

Contributing to this trend is friction, more particularly the friction faced by job-changers. On average each year 9.5 million DC participants will switch jobs. When they do, they will face the question of what to do with the thousands â and sometimes tens or hundreds of thousands â of dollars theyâve saved in their DC plans. Should they:

Faced with a dizzying array of options, each of which has procedures and consequences that often are not easily understood, especially in the middle of a stressful job change, participants are left to their own devices. From a behavioral finance perspective, the system unintentionally encourages participants to take paths of least resistance such as cashouts and stranded accounts by:

Itâs no wonder, then, that cashouts and stranded accounts are reaching crisis proportions. Theyâre the easiest choices to execute.

But the option that arguably makes the most sense for many participants â consolidating savings into their next employer-sponsored DC plan, or ârolling inâ â is the most difficult. According to a recent study by the Government Accountability Office, 401(k) plan processes for handling separating participantsâ accounts create barriers for participants to roll their savings to a new plan, making IRA rollovers an easier and faster choice for those who want to consolidate their savings in a new accounts after they separate from an employer.

401(k) service providers and asset gatherers often encourage rollovers into IRAs while discouraging roll-ins to new plans, according to the report, and often provide insufficient information to enable participants to make fully-informed decisions. Few provide participants with assistance in rolling from plan to plan: in fact, of 30 providers reviewed, the GAO found only one did so. Meanwhile, plan designs often discourage roll-ins, and plan sponsors often have little incentive to complete the extensive paperwork required to enable participants to move between plans.

Despite what might appear to be an intractable situation, there is an approach that has been proven to achieve the goals of reducing friction and leakage by cutting cashouts and other bad participant behaviors while improving plan performance.

By providing job-switching participants with just-in-time, personalized, unbiased counsel from knowledgeable professionals, and by helping participants to complete complex paperwork, the retirement system can help participants keep their savings invested in their next employerâs DC plan, preferably, or in a qualified account such as a low-cost IRA.

To some it might sound impossible. But itâs already being done with great success.
A large plan sponsor in the health industry â one of the largest employerâs in the nation with more than 200,000 participants and a 25 percent annual employee turnover rate — has introduced a program to assist participants with rollovers to new employer plans, existing IRA plans, and to locate missing participants.Â  According to a study by my colleagues and I at Boston Research Group, between 2007 and 2012 the plan has:

So who wins in such a scenario? In one of those rare occurrences, all parties stand to benefit.

Itâs important to note that the results of the above consolidation and roll-in program represent only one planâs experience. Nevertheless, those results are so promising as to warrant closer study and experimentation. If the same results could be achieved system-wide, then the retirement system would retain more than $1 trillion over 10 years in leakage and save approximately $50 billion in unnecessary costs associated with the effects of friction.

Consolidation and roll-in programs are increasingly a topic of discussion among forward-looking industry leaders who value an âin-systemâ fix â rather than a regulatory one — for systemic problems. Already, certain industry groups are examining ways in which to ease consolidation and promote roll-ins. The ideas deserve widespread discussion and deliberation. The defined contribution system enables American workers to save effectively for retirement. We can make it even better by eradicating leakage and friction, thereby enabling all parties to enjoy greater efficiency, lower costs, less risk, and more opportunity.