Q3 State of Personal Finance Study by Ramsey Solutions reveals that one in five Americansâ day-to-day finances are being significantly impacted by inflation. Read the full study here. 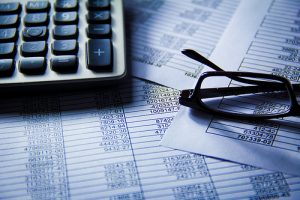 NASHVILLE, Tenn.–(BUSINESS WIRE)–As Americans head into the holiday season, they are met with an inflation rate of 6.2%, up five percentage points from one year ago. Ramsey Solutionsâ Q3 State of Personal Finance study reveals that one in five Americansâ day-to-day finances are being significantly impacted by inflation; however, 25% of Americans are planning to spend more this holiday season than they did last year.

Those with consumer debt (28%) were more than twice as likely to say inflation has had a significant impact on their day-to-day finances compared to those who are consumer debt-free (13%). Despite the impact of the economic climate, consumers are anticipating spending $641 on Christmas alone, and over half of them (56%) will turn to credit cards to do this.

âIn a time when inflation is forcing Americans to stretch every dollar, many are tempted to take on unnecessary consumer debt,â said Rachel Cruze, personal finance expert and Ramsey Personality. âGoing into debt is never the answer. The key to winning with money is establishing a budget and sticking to it, no matter whatâs going on around you.â

This holiday season, technology is at the top of the wish list, as 52% of consumers plan to spend on things like computers, phones and tablets. Forty-eight percent (48%) plan to buy clothing, 36% will look for deals on toys, 27% say theyâll buy appliances, and 23% plan to buy furniture. Millennials are planning to shop for upgrades for their homes this holiday season.

One-Quarter Plan to Spend More on the Holidays This Year

With the yearâs biggest shopping season right around the corner, many Americans are already making their holiday spending plans. Four in 10 expect to spend on Thanksgiving, 68% are planning to spend on Christmas, and one in five will spend on New Yearâs Eve. On average, theyâre planning to spend $216 on Thanksgiving and $641 on Christmas. For Thanksgiving, the top expenses are decorations and gifts. While at Christmas, not surprisingly, gifts are the top expense, with decorations and candy rounding out the top spending categories.

And after a pared-down holiday season last year, one in five say theyâll spend more on Thanksgiving than they did last year, while 25% are planning to spend more on Christmas this year than last year. With the holiday shopping season starting earlier and earlier every year, many shoppers are getting an early start on holiday budgeting as well. More than a third (35%) say they start saving for their Christmas or holiday spending by September. However, on the other extreme, nearly three in 10 (29%) donât plan ahead at all for their holiday spending.

Consumers Feel the Pain of Inflation in Their Pocketbooks

Prices for consumer goods have been rising throughout the year. Americans have faced inflation as high as 5% in 2021, and itâs not going unnoticed. The majority of Americans (79%) say their money doesnât seem to go as far as it used to, and eight in 10 have experienced higher prices on the things they normally buy in the last three months. Consumers are seeing these increases the most on everyday items like groceries (82%) and gas (66%). But inflationâs reach goes beyond that with nearly half (48%) of consumers seeing higher prices on household goods, 38% on clothing, and 19% on furniture. 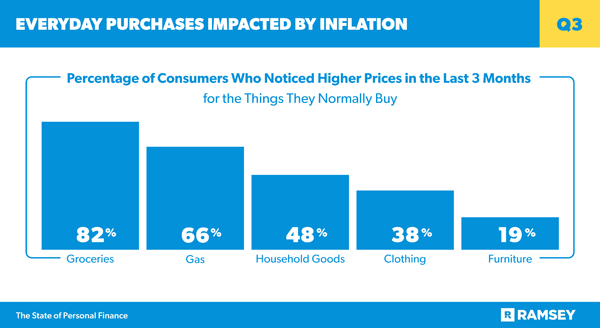 With consumer prices on the rise across the board, consumers will have to increase their income or tighten their budgets. Many will face hard choices as we head into the end of the year and the busy holiday shopping season.

In a time when inflation is forcing Americans to stretch every dollar, many are tempted to take on unnecessary consumer debt...

Another shift in consumer habits shows that buy now, pay later (BNPL) services are becoming more common. Nearly one in four online shoppers have used a BNPL payment service like AfterPay, Affirm or Klarna in the last three months. BNPL services allow shoppers to split the cost of an item into several payments made over time. But the data shows that the majority of those who use these services have missed a payment. Of the 22% who used a buy now, pay later service in the last 90 days, 74% have missed a payment in their payment plan.

The State of Personal Finance study is a quarterly research study conducted by Ramsey Solutions with 1,004 U.S. adults to gain an understanding of the personal finance behaviors and attitudes of Americans. The nationally representative sample was fielded Sept. 29, 2021, to Wednesday Oct. 6, 2021, using a third-party research panel.

Ramsey Solutions is committed to empowering people in the areas of money, business, leadership and personal development using Biblically based, commonsense principles and education. Every day, Ramsey Solutions reaches millions with nationally syndicated radio shows and columns, No. 1 national bestselling books, products and courses, and industry-renowned podcasts and video channels. Ramsey Solutionsâ world-class speakers and authors give inspiration, practical advice and hope to audiences across the country. Ramsey Solutions and its team of more than 1,000 are dedicated to doing work that matters. For more information, visit ramseysolutions.com.