On The Heels Of Renegade Seniors Who Defy Aging 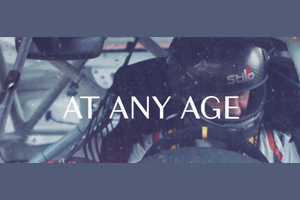 VANCOUVER, Jan. 29, 2020 /PRNewswire/ — Dean Neuls was lined up on the starting grid against 40 other drivers. They were less than half his age, and 10 times more experienced. No wonder he was shaking in the driver’s seat at the start of his very first race in the Porsche SportsCup!Â In 60 seconds, the green flag would drop and he’d be screaming down the track, finally realizing his dream to race series joins inspirational men and women as they perform feats usually reserved for young adrenaline junkies.

Episode 1 of At Any Age is available to view now.

Discover how 57-year-old Dean Neuls fared racing a 170-mph car 20 years after most drivers have retired. Neuls battles with osteoarthritis and injury to make the starting grid in Europe’s Porsche SportsCup Racing Series.

86-year-old Dilys Price is the world’s oldest female solo skydiver. Watch the Guinness World Record holder and discover how free-falling from 20,000 feet is still a regular pastime for her.

Inspiration to ‘Chase Your Dreams’

The goal of the video series is to give viewers the inspiration to chase their dreams, and live life to the fullest no matter what stage of the journey they’re at.

“There’s a mindset behind staying independent as we age. My hope is that this new At Any Age series helps people tap into that mindset and adds a helpful dose of inspiration too!” says Dean Neuls, the CEO of AlgaeCal â the company behind At Any Age. (Dean is also the star of the first episode).

AlgaeCal will release further At Any Age episodes in the near future, and is searching for new inspirational people to profile. They encourage anyone who defies the conventional approach to aging to reach out (see link above).

There's a mindset behind staying independent as we age. My hope is that this new At Any Age series helps people tap into that mindset and adds a helpful dose of inspiration too...

At Any Age is produced by AlgaeCal, a calcium supplement company dedicated to helping women and men make informed, conscious decisions about their health â specifically their bone health.

The company has expanded its efforts to visual storytelling via the At Any Age series to inspire people of all ages to follow their dreams and live life to the fullest.