The State of Our Cities 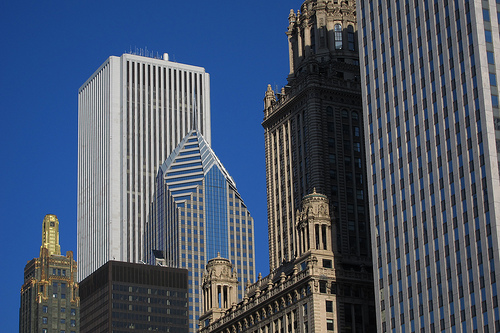 
Two years ago almost to the day, municipal bond investors were jolted by headline news about a potential bankruptcy filing by the city of Detroit. This past week, they had to once again contemplate the prospect of a Chapter 9 filing by another major U.S. city: Chicago.

Meanwhile, the ongoing Puerto Rico debt crisis appears to be nearing its endgame as the island faces the real possibility of a government shutdown due to declining liquidity and a virtual lack of market access. The latest wave of negative headlines was triggered by the Illinois Supreme Court decision May 8, which found the State’s 2013 pension reform law unconstitutional.

How to fix it withoput raising taxes?

This ruling put the burden of solving Illinois’ worst-in-the-nation pension problem squarely back on the shoulders of state legislators, particularly those of Governor-elect Bruce Rauner as he tries to fix the Prairie State’s structural deficit problem without increasing taxes.

The Illinois Supreme Court decision, although significant for State finances, has had a much more severe impact on the City of Chicago’s perceived creditworthiness. This week, Moody’s dramatically downgraded Chicago General Obligation bonds and related credits to below investment grade, or “junk”, levels. S&P and Fitch have followed suit but, so far, have maintained the city’s ratings at investment grade (albeit marginally so) levels.

Chicago's credit problems are certainly not news to muni industry observers. For several years now, market participants have been keeping a wary eye on the City’s $600 million jump in pension expenses starting in FY2016. Until last week’s court ruling, however, it was widely expected that the City would find a way to deal with its pension issue.

Moody’s action, considered somewhat premature by many, has had the self-fulfilling impact of creating a liquidity crisis for Chicago by triggering rating-based events of default for several of the city’s swap transactions. Unlike the slow-motion financial disaster that is Puerto Rico, the latest muni credit crisis in the Land of Lincoln cannot be easily dismissed as a special, isolated risk situation that has been largely transferred from traditional muni buyers to hedge funds and other crossover buyers.

At the heart of the Windy City's fiscal woes is an issue that is being dealt with by governors and mayors across the country: how to pay for escalating pension and health care benefits of retired employees without crowding out normal state and local government services.

In the post- financial crisis era of constrained taxing capacity and aging demographics, pension funding has become the key credit issue for state and local governments. Furthermore, as shown by the Chicago case, much of the current fiscal stress will be downstreamed from the State to the local government level. Illinois’ efforts to balance its budget will almost certainly come at the expense of localities and special districts throughout the Prairie State.

This phenomenon is likely to be repeated at other financially strained States from New Jersey to Lousiana, among others. Thus, as we head into the Memorial Day weekend, the muni market is once again struggling with significant headline risk. As was the case in 2013, much will hinge on the outlook for interest rates: in munis, credit risk and interest rate (or duration) risk go hand-in-hand, primarily due to a traditional lack of effective hedging tools. Mutual fund flows have already started to turn negative again and it remains to be seen whether they will become a catalyst for another major correction in the tax-exempt sector.

As we are poised to exit a period of expansionary monetary policy and spreads begin to normalize and move wider, the real impact of the mountain of new regulations will be felt.

Moodyâs action, considered somewhat premature by many, has had the self-fulfilling impact of creating a liquidity crisis for Chicago by triggering rating-based events of default for several of the cityâs swap transactions

Dodd-Frank, European Market Infrastructure Regulation, Basel III and the Volker Rule are eliminating competition, reducing liquidity and increasing costs in the world of institutional trading. Since the financial crisis, Dodd-Frank has reduced credit derivative liquidity by more than 75%; this, as CDX.IG trades around a benign 65 basis points and CDX.HY 340 basis points.

At the peak of the financial crisis, however, spreads on CDX.IG ascended to nearly 300 basis points with a bid/ask spread of 10% of the market; that was with nearly 300% more liquidity than the market trades with today. The introduction of clearing to legacy, bilateral OTC markets was intended to inject order, along with a dose of mutualized and formally margined risk, to the credit derivative and OTC markets.

But where regulations have fallen short, or more specifically over-regulation has infringed, will be precisely where the pain is felt the most when hedgers of risk/natural buyers of protection will be looking for the exact thing wider spreads, freely priced markets and deteriorating credit warrant—the ability to hedge and transfer risk efficiently and cost effectively. One could argue that the intended effect of these regulations, particularly Dodd-Frank, was to reign in an out-of-control credit derivative market.

In fact, within the past week Nomura announced plans to exit client clearing in North America and abroad, which follows exits by custodial behemoths Bank of New York and State Street.


Ushering in a golden age of data governance

Gordon Gecko never spoke to the importance of data governance in "Wall Street", and yet it has possibly become the most discussed topic on the street today.

Although lacking a formal definition, data governance is understood as the policy, organization, processes and control procedures surrounding the monitoring and control of data usage and management.

The need for qualitative data governance became clear in the aftermath of the financial crisis, as the information technology and data architectures in place fell far short of effectively monitoring and reporting financial risks. In fact, many banks lacked any ability whatsoever to aggregate risk exposures and identify concentrations quickly, accurately, across business lines and between legal entities.

In response to these shortcomings, new regulations on data governance standards were included in the sweeping financial reform bills, Dodd-Frank, Solvency II and European Market Infrastructure Regulation. Most notably, in the case of Dodd-Frank, title VII states, “records of daily trading records of the swaps of the registered swap dealer and major swap participant must be maintained and that these records include but are not limited to all related records (including related cash and forward transactions) and recorded communications, including electronic mail, instant messages, and recordings of telephone calls .”

Going forward, the regulations now require swap dealers and major swap participants to record all information necessary to reconstruct the trade accurately—for the entire duration of the investment vehicle—and ensure each transaction is easily identified and searchable. Although these rules were once thought to be prohibitively costly, several industry leaders are finding ways to incorporate compliance efforts with competitive tactics to bolster growth, ushering in a golden age of data governance.

Recent large-scale investments by several major banks showcase how the Dodd-Frank requirements can be utilized for strategic efficiency and data transparency. For example, the ability to analyze different business lines in real-time provides a strategic advantage when deciding whether to expand or divest lower-performing ones, significantly improving the use of capital . This is not to say that data compliance is no longer an issue.

Recent scandals such as the global LIBOR rigging continue to plague the sector, calling into question whether a new round of regulation may be required to encompass key rate benchmarks and the entirety of market indexes. With this ongoing scrutiny, and with Basel III set to be implemented in 2019, data governance will become essential to answering inquiries from not only regulators but clients on data processes, controls and even contingency planning for any future misconduct.