The Burdens And Barriers Of Income Planning

The Growing Impact Of Our National Debt

Why it matters for our investments, our health and our way of life 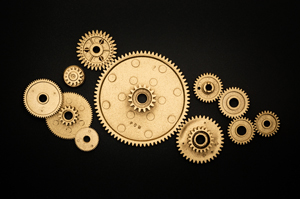 The amount of debt we hold as a nation is increasing exponentially. As an investment manager and former CIO for major banking institutions as well as public pensions systems, I view this as an issue that is significantly under-appreciated. We were on a difficult path before COVID-19, but the past 18 months have created issues that unequivocally require an immediate change in direction.

While most of us understand the implications of debt on a personal level, understanding it in the aggregate can be much more abstract. To help grasp the issue and why it matters â both from an economic as well as cultural standpoint â Iâve included below historical examples as well as recent phenomenon that highlight why the issue of debt is so important and why it is one that needs to be addressed more thoroughly.

The Sword of Damocles

In Greek mythology, there is the story of Damocles, a member in the court of Dionysius II of Syracuse. The story refers to the paradox that with great fortune and an enviable life of power, wealth, and luxury, there is always the threat of anxiety and danger looming above. Nothing should be taken for granted.

As we think about our current economy and way of life, this story becomes eerily prescient. For example, the Institute of International Finance recently released their estimates for second quarter debt levels in the global economy. The number came in a hair short of $300 trillion, which represented a $36 trillion gain just during the 18 months of Covid-Lockdowns to date, and nearly a 50% gain from levels as recently as 2015.

That figure is not only staggering in size but is also a reminder of how unhinged central bankers all over the world have driven debt levels to a crushing 353% of GDP (red line). 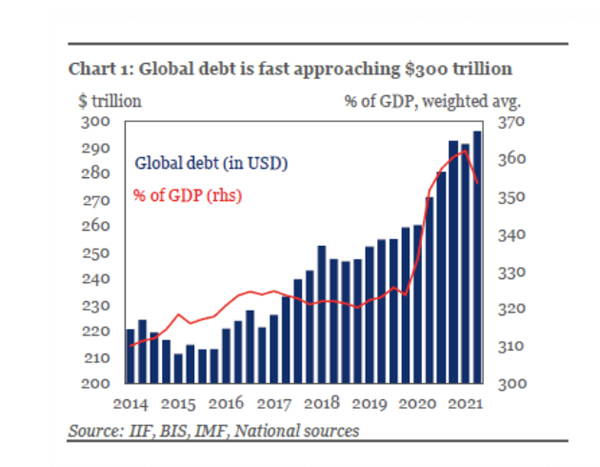 In the last eighteen months, the United States Congress has enacted nearly $7 trillion in new spending due to COVID-19 containment policies â including the recent infrastructure bill. With nearly 128 million households in the U.S., this works out to nearly $54,000 per household in new debt.

It is expected that the Biden Social Spending bill, if passed, will add an additional $1.8 trillion onto the $7 trillion of spending.

Further, as seen by the chart below, the Federal Reserveâs balance sheet topped $8 trillion for the first time this year. It stood at nearly $900 billion at the start of the Great Financial Crisis in 2008 and was approximately $4 trillion at the end of 2019. 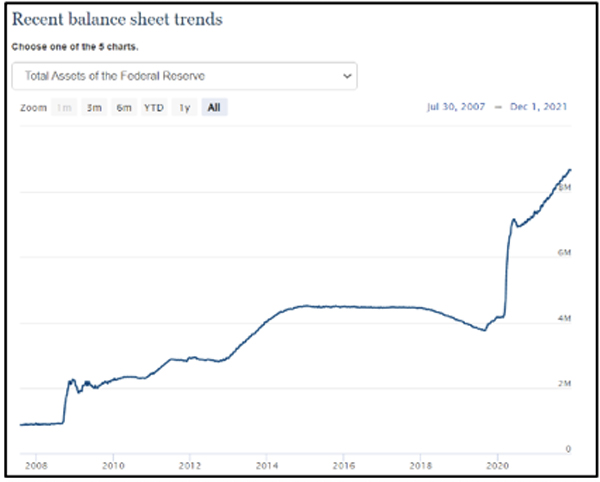 We are heading into a period of very slow growth, as evidenced by a few major developments. First, China has been a growth engine for the world, and property development has been a huge factor in Chinaâs economic growth. It accounts for 28% of GDP, and much of it has been funded by debt, including dollar-debt.

Foreign investors piled into the property sector over the years, buying hundreds of billions of dollars in bonds, including dollar bonds issued by Chinaâs property developers. They bought those bonds because they liked the yields, in some cases over 10%, thinking that the Chinese government wouldnât let the companies default – that it would bail out the bondholders as it bailed out so many bondholders before. Surely it would do it again, given how crucial funding of the property sector is to the Chinese economy.

Now just about everything has gone wrong for these foreign investors. For months, there has been a massive crackdown by Chinese authorities on liquidity-driven inflows into the housing sector.

Authorities cracked down on over-leveraged property developers. They targeted mortgage approvals and interest rates for first-time buyers. They tamped down on rental growth. They pushed banks to reduce their lending to homebuyers. A national property tax has been put on the table.

Furthermore, Evergrande owes over $300 billion â to banks and non-bank financial institutions, domestic and international bond holders, suppliers and apartment buyers. It has bank borrowings of $90 billion, including from Agricultural Bank of China, China Minsheng Banking Corp and China CITIC Bank Corp (reports have 128 banks with exposure). Thousands of suppliers are on the hook for $100 billion.

Evergrande is the most indebted of a highly levered Chinese developer sector (top three in revenues). It âowns more than 1,300 projects in more than 280 cities,â employs 200,000 people â and âindirectly helps sustain more than 3.8 million jobs each year.â

However, Evergrande has debt due and cannot pay it. Recall all of the ghost cities? They remain ghost cities and the capital behind them is now facing defaults.

At the time of this writing, while nowhere near as big as Evergrande,Â Shimao is Chinaâs 13th biggest developer by contracted sales and among the largest property debt issuers with about $10.1 billion in outstanding local and offshore bonds.Â The company has a junk Ba1 long-term rating from Moodyâs Investors Service and is on review for a further downgrade. ShimaoÂ lostÂ its investment-grade rating at S&P Global Ratings last month but has an investment-grade rank of BBB- at Fitch Ratings.

Evergrande has debt due and cannot pay it. Recall all of the ghost cities? They remain ghost cities and the capital behind them is now facing defaults...

A bond issued by one of Shimaoâs local units suffered the largestÂ haircutÂ in Chinaâs exchange-traded repo market last week. Borrowers putting up a Shanghai Shimao Jianshe note due 2025 for collateralÂ get just 35% of the noteâs face value as cash,Â down from 50% the prior week. Shimaoâs dollarÂ bondÂ due 2022 fell 12.4 cents on the dollar to 75.7 cents, set for its lowest price in about month.

âA major price collapse or a downfall of Shimao will cause a lapse in confidence in cross-over investment grade names in China property, which acts as the final refuge for the sector,â according toÂ Anthony Leung, head of fixed income at Metropoly Capital HK.

To return to Greek Mythology for a moment, when Odysseus returns from the Underworld, Circe gives him detailed instructions regarding how to return home safely. She gives him two options after passing the Sirens:

Odysseus has a choice to make. He can either ride his ship on the side ofÂ Scylla, which means he will lose six men, one for each terrifying head, or he can choose to ride on the side ofÂ CharybdisÂ and pray she does not suck the entire ship down into her abyss and spit it back out again.

Odysseus thinks he can kill Scylla, but Circe chides Odysseus and reminds him to keep his pride in check. âScylla is not mortal. She is immortal evil: a dire, ferocious thing of dread. You cannot fight her, there is no defense: the only course is flight.â But no matter how much information Circe reveals, Odysseus could never prepare for what he was about to encounter.

Thus, the idiomÂ caught between a rock and a hard placeÂ means one has two choices, but both choices are unpleasant and both choices lead to some kind of trouble.

Central bankers had been letting inflation run red hot in the face of these towering debt burdens. They had a choice â let inflation rise or let the economy soften, both choices being unpleasant. Central bankers chose the former.

However, the Federal Reserve announced that they will end asset purchases â better known as tapering. Further, Federal Chairman, Jerome Powell, has made hawkish comments about reigning in inflation. This resulted in a sell-off in equity, cryptocurrencies as well as risk assets.

Additionally, the Treasury yield curve has flattened noticeably as of late, as Powell suggested the Central Bank could speed up the pace of its tapering campaign to combat rising inflation pressures, while also saying that the word âtransitoryâ in referencing inflation should be retired.

Some Say âThis Time Is Differentââ¦ It Never Is

The debt bacchanalia, along with interest rate suppression, has resulted in the hunt for yield and taking more and more risk to generate returns. This has created a mania within many sectors.

With the Federal Reserve beginning to taper, and liquidity starting to wane, investor perception of risk will begin to change. That perception suggests that certain asset classes should be avoided:

So, another all-time stock market high, indeed. But actually, even that is not what itâs cracked up to be. As the Fedâs flood of liquidity has washed through the canyons of Wall Street it has stuck to fewer and fewer stocks, a narrowing process that always accompanies the final phases of a blow-off top.

But surely this one is for the record books. Fully two-thirds of the entire 23% of the YTD gain in NASDAQ (3780 stocks) is accounted for by just 5 stocksâMicrosoft, Google, Apple, NVIDIA, and Tesla. 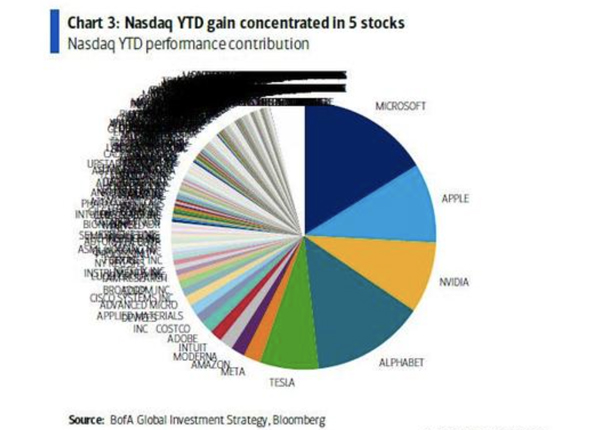 With All Of This Bad News, Is There Anything To Do?

Yes, there are different strategies that can at least help protect against some of the macro issues we are facing right now. Instead of bonds yielding 2% or less, consider well-collateralized and liquid short-term private credit yielding 5 plus percent. Certain special situations will yield even more. Consider trading strategies to replace traditional buy-and-hold equity/bond exposure.

Further, in software, we are finding compelling opportunities in cyber security, SaaS and infrastructure. In medical innovation and healthcare, we have also seen wellness/life sciences and critical services that are not related to the macro environment. We remain constructive on global active equities strategies and are in advanced discussions with groups who are unlocking value through a constructive activist campaigns.

In the end, the world is in a tough place right now and the solution for getting back on track is not easy. It requires not only a change in economic and legislative policy, but a change in culture as well. We cannot continue crippling our livelihoods as well as those of our children. Further, if there was any doubt about how bad the issue of debt has become, hopefully the numbers outlined above provide some useful context.

But while understanding the issue is important, we are not powerless with the means of defense we have at our disposal. There are certain investment vehicles that can protect against the issues we face, as discussed above.