It's All In The Swing

Golf and Investing: Working The Ball 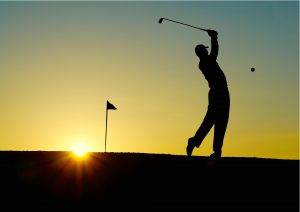 Mr. Selengut is a private investor and a regular contributor to Advisor Magazine. He is the author of the book âThe Brainwashing of the American Investor: The book that Wall Street does not want you to read.â He can be reached at [email protected] Visit him here.

Editor’s note: This is Part IV in a four part series, originally published by the author in 2009, just as the markets (both income and equity) began their recovery from “the financial crisis” correction. As is so often the case in life, and in finance as well… past is prologue.

I think it was the immortal Ben Hogan who quipped: I can put “left” on the ball and I can put “right” on the ball; But “straight” is essentially an accident. Most amateur golfers would make a slightly different observation. We can hit the ball left or right with no problem; we just have no idea when either will occur.

As to straight, most of us refer to that phenomenon as “the dreaded straight ball”— and it’s this lack of straight that makes it so critical for us to master the art of working the ball. We need to understand how to move the ball left or right, consistently, on the golf course, under pressure, but without ever aiming out-of-bounds or into a lateral.

It is doable though, and Ehow.com is a great place to start. There, at “work-golf-ball” is a simple five-step tutorial that anyone should be able to master with countless hours of range work. Of course it’s more difficult on an actual golf course, with those red and white stakes, trees, bodies of water, marsh grasses, and back yard barbequers.

To become a lower handicapper, work the ball we must— unless your name is Moe Norman. Making the shot go higher or lower than normal is another of those ball working skills that you need to master to save strokes. Mother Nature really appreciates it when you maneuver the ball below Live Oak branches and over environmentally protected “no search” zones.

Really, it just takes some practice, keeping the club on the target line, a consistent tempo, head down, either an open or closed stance, relaxed hands, etc. OK?

One Financial Triple-Bogey At A Time

Mother Nature’s investment twin sister is not nearly as difficult to deal with, but is often treated by the media with a level of disrespect normally reserved for ladies whose profession involves a whole “nuther” sort of market making. Perhaps deservedly so, but the media is an instant gratification or blame environment little suited to either golf or investing.

Today’s product sideshow and short-term roulette-like atmosphere is just not what the investment gods had in mind when they developed trade, created world business, and gave birth to the building blocks of the financial markets.

Even Pete Dye would be shocked at the way Wall Street’s financial course architects have turned the most rudimentary of tracks into a moguled, windswept, bunker field, fraught with hazards unimaginable even by their creators. Whatever happened to stocks and bonds?

One financial triple-bogey at a time, the world’s amateur investors are learning that they either have to “Work the Investment Ball” or drop out of the tournament. In this case however, a lifetime of short straight strokes down the middle of the fairway will achieve par most of the time. The sooner investors apply the K.I.S.S. principle to their investment program, the easier the process becomes.

Lowering The Slope Rating Of Wealth

The Working Capital Model is a boring, conservative methodology for lowering the slope rating of the most diabolical wealth accumulation courses. Market hazards are avoided with reasonable expectations, and retirement approach shots that grow the annual income chip by chip, throughout the wealth accumulation period.

In 2008, this approach maintained income levels with market values falling at a relatively lower rate. In 2009, market values have grown acceptably (relatively speaking) while income levels have been bolstered by robust profit taking.Â Thinking about the next hole or two, too soon, spoils many a round of golf. Not thinking about the next turn of the market, interest rates, or the economy soon enough will sabotage most normal investment portfolios.

Most of us recognize that, without full time instruction and practice, golf is just not easy to master. Less than 10% of amateurs break 100 regularly (unadjusted), but most of us could do better if we had the time and money to play more frequently.Â Similarly, most amateur investors are unable to practice frequently enough to learn how to “work the ball” away from the hazards that always become headlines much too late to be useful.

Practice with market simulators of any kind, by the way, is as useless as pounding balls at a video screen image of The Ocean Course. When it’s your own money, there’s a whole new set of emotions to be dealt with. How often have you brought that “poifect” drive from the range to the first tee box?

Here’s to the search for the holy repeatable swing.