Want to do something about climate change? Try divesting from bank stocks 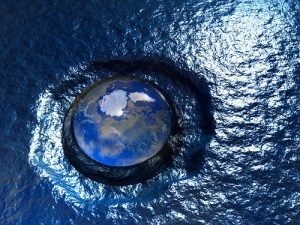 Mr.Â Brockwell is Investment Communications Director at Azzad Asset Management, a socially responsible registered investment advisor located in Falls Church, Virginia. As a matter of policy, Azzad excludes the banking industry from its mutual funds and separately managed accounts. The views and opinions expressed in this article are solely those of the author and may not be reflective of those held by Azzad Asset Management. Reprinted here with permission. VisitÂ www.azzad.net.

Most of us are aware of the existential threat that climate change poses to our species. The immediate impacts of a warmer planet range from melting polar ice caps to drought, famine, and extreme weather events globally.

Google the phrase “Kiribati climate change” to read more about the people whose country is expected to be the first to disappear due to rising sea levels. If greenhouse gas emissions continue at their current pace, experts warn that widespread catastrophe looms by the beginning of the next century.

The most notorious culprit in this drama is carbon dioxide (CO2).

Most CO2 emissions come from the burning of fossil fuels. Thus, fossil fuel companies have been the target of a sustained divestment campaign by the socially responsible investment industry. While divestment is impactful, there is a critical but often overlooked driver of investment in the fossil fuel industry that has only now begun to get the collective attention of the environmentally conscious: big banks.

Banks play an essential role in allocating financial resources for the private sector.

They do this through their lending and investment operations. For example, coal-fired power plants, the nation’s top source of CO2 emissions, are costly to build, typically amounting to roughly $2 billion for a 600 megawatt facility.

Power producers therefore rely heavily on banks to mobilize the necessary capital for such ventures. As much of this financing is indirect â delivered through corporate loans and bonds â banks have been mostly successful in keeping their role in global warming hidden from public scrutiny.

although they talk a good game about corporate social responsibility and renewables, available data show that banks have helped to wreck the climate

According to the watchdog website CoalBanks.org, at least $500 billion in financing from big banks has gone to support coal companies and their harmful projects since 2005.

Environmental groups have begun to pull back the curtain, naming and shaming banks for funding fossil fuels.

And their call for divestment and moving money from megabanks to community institutions is starting to pay off. Last year, major offender Bank of America announced that it would no longer finance mountaintop removal (MTR) coal mining, joining a litany of Wall Street banks that had already pledged to stop financing such practices thanks to activist pressure.

Of course, the egregious practice of funding MTR is but one of many ways that major financial institutions have bankrolled global warming.

Extraction projects in tar sands and artic drilling, not to mention those coal-fired power plants, will keep CO2 in the headlines for years to come. But getting banks to end MTR financing is a good first step. The lesson here is that more pressure needs to be appliedânamely, to divest from megabanks and by extension the rest of their fossil fuel portfolios.

When we effectively target the financing for projects that require considerable capital, we can terminate the business–or at the very least, make it cost prohibitive in many instances. Direct divestment from fossil fuel companies is only part of the solution.

Let’s remember big banks the next time we sit down to go over our financial portfolios. As the activist adage goes: today’s investments are tomorrow’s emissions.