New research from Fidelityâs Viewpoints Blog looks at the opportunities ahead for 2023 and suggests a more optimistic course for international stocks. Reprinted with permission. VisitÂ www.fidelity.comÂ for more details. 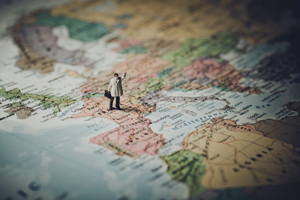 Since the cold war ended in 1991, the economies of most countries around the world have grown more closely linked. Imports and exports have increased, jobs have been moved to lower-wage countries, stock prices of multi-national companies have risen, and inflation has been held down. Over the past 2 years, though, policies intended to slow the spread of the COVID virus and to punish Russia for invading Ukraine have slowed the long march toward the creation of a truly global economy and global markets where US companies and investors can seek opportunities anywhere in the world.

In 2023, the globalized economy is likely to face further challenges ranging from high inflation and interest rates to the increasing rivalry between China and other major countries. However, none of that is reason for US investors to turn their backs on the rest of the world in the new year. In fact, 2023 may be a good time to look for bargains in international stocks that have the long-term potential to deliver higher returns than US stocks.

Those opportunities for bargain hunting are what is attracting Brett Sumsion, co-manager of Fidelity FreedomÂ® Funds (FFFEX), to international stocks. The target-date portfolios he manages are designed to help investors reach their long-term retirement goals and hold an overweight to international stocks. He believes many international stocks are mispriced and do not reflect the fundamental health of many high-quality non-US companies. He says, “Valuations suggest that investors are maintaining low expectations and underestimating the prospects of intermediate-term incremental improvement.”

Sumsion is not alone in believing that getting exposure to markets and economic growth outside the US will likely offer attractive long-term opportunities. Fidelity’s Asset Allocation Research Team forecasts that international stocks will outperform US stocks over the next 20 years. Indeed, they expect even mature, developed markets such as Europe to outperform the US over that time.

Those forecasts reflect the expectation that spending by consumers in EM countries will be a major source of economic growth and profits for companies over the next 20 years. EM stocks are estimated to be some of the best-performing stocks over that time partly because many EMs have relatively young and growing populations whose incomes will rise as their economies grow. India, for example, already boasts a greater number of households with disposable income of more than $10,000 than does Japan. The growth of these domestic consumer markets is a key reason why Fidelity’s Asset Allocation Research Team forecasts that EMs will grow to comprise about half of global gross domestic product in 20 years, compared with about 40% now and 25% 20 years ago.

But What About Now?

Though international stocks may be attractive in the long term, many countries face high inflation and economic downturns as 2023 begins. Geopolitical tensions are also increasing. These include what looks increasingly like a cold war-style proxy war between NATO and Russia, as well as China’s adoption of more assertively nationalistic policies. Add in volatile commodity prices and rising interest rates and as Fidelity’s Asset Allocation Research Team puts it, “A broad set of crosswinds is creating greater differentiation among countries.”

The most dangerous of those crosswinds may be inflation. Higher prices reduce the ability of lower- and middle-income consumers to spend, which in turn lowers economic growth. Inflation is pinching pocketbooks around the world, but it is especially painful for the less wealthy in emerging markets who may be forced to reduce spending.

Inflation also poses a less obvious threat to the economic and societal health of developed countries such as the European Union countries, the UK, and Canada. Unlike in the US, where mortgage loans are mostly made at fixed rates of interest, debtors in much of the rest of the developed world repay their mortgages at rates that adjust up and down depending on interest rates set by central banks. Since 2022, the Bank of England, the European Central Bank, and others have been raising rates aggressively to battle high inflation. These higher rates and bigger mortgage payments could threaten the ability of many of these countries’ citizens to afford their homes. That’s a situation which could potentially lead to a wave of loan defaults, house foreclosures, and deepen the recessions that some of these economies may have already entered.

The legacy of COVID also continues to weigh on emerging-market economies. While China’s recent decision to abandon its zero-COVID policy of shutdowns and quarantines may help boost its own recovery from recession, the World Bank predicts that EMs will average GDP growth of 2.8% in 2023, a full percentage point lower than the 2010-2019 average.

EMs have been defined as places where the actions of government policymakers may matter to investors at least as much as the rising and falling of the business cycle. That has meant that investing in them involved greater political, social, economic, and regulatory risks than investing in more developed markets. But today, developed market (DM) and EM economies alike are being shaped by governments’ management of everything from monetary and fiscal policy to information technology regulation to relations with Russia, so EMs and DMs now may resemble each other more in this respect than they used to.

While they no longer hold a monopoly on policy risk, EM stocks are still likely to be potentially more volatile and less liquid than stocks from developed markets. But because they have not historically moved in lockstep with developed markets, they can help diversify investors’ portfolios to help manage risk. Of course, diversification and asset allocation do not ensure a profit or guarantee against loss.

Investors should also keep in mind that the EM category contains a wide variety of companies operating in very dissimilar countries. The countries that are grouped within the same EM indexes may present very different opportunities and risks to investors. This makes both careful security selection by experienced managers and diversification within portfolios important for spotting opportunity while avoiding undue risk. 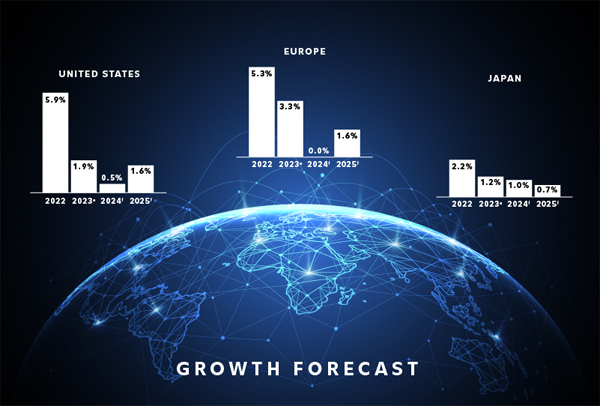 Where And Why To Look For Opportunities

It’s tempting for US investors to look away from the rest of the world and overlook the fact that stocks of companies from countries with good long-term prospects may present buying opportunities in 2023. After all, while inflation, war, and more will likely continue to vex international markets this year, the US economy still appears healthier than those of most other major countries, the dollar is strong, and any potential recession is expected to be short and shallow.

However, at the start of 2023, cyclically adjusted price/earnings ratios for non-US stocks are lower than those of the S&P 500Â®. That fact, combined with the strength of the US dollar against other major currencies, means many international stocks represent relative bargains and suggests they may offer opportunities for attractive returns as well as providing diversification for US investors’ portfolios. Despite volatility over the past year, prices of US stocks are still relatively high compared with stocks from outside the US and the US dollar has risen against most major developed-market currencies. “This combination of relatively low stock prices and a strong dollar indicate a relatively favorable long-term backdrop for non-US stocks and currencies,” says Fidelity global equity strategist Seth Marks. Sumsion adds that, “When investors extrapolate the recent past into the future, there is an opportunity for active managers.” He says, “I continue to focus on fundamentals such as companies’ cash flows to determine the appeal of various investment opportunities.â

Bill Bower, manager of the FidelityÂ® Diversified International Fund (FDIVX), also is focused on finding high-quality companies that are being mispriced because of negative sentiment about the effects of inflation and war. “It’s important to focus on high-quality companies that are world class, wherever they may be from,” he says. DMs such as Europe offer lower stock prices than the US partly because European Union countries are suffering from high inflation due to their reliance on natural gas from Russia for most of their energy. But Bower says Europe offers more than just lower stock prices. “They’re also home to high-quality companies with some unique investment ideas, like LVMH (LVMHF), which I believe is probably the most unique luxury goods company in the world,” he says.

China: A Story Of Its Own

China, which has been relatively unaffected by the violence and sanctions in Europe and has maintained its trade and energy relationships with Russia. That insulation from the inflationary effects of energy shortages puts China in a different position than much of the rest of the world. But China is also in a different spot than most of the rest of the world due to its own policymakers’ actions. While most other countries are in the mid- to late phase of the business cycle, Xiaoting Zhao, manager of FidelityÂ® Emerging Asia Fund (FSEAX), says that China’s “first-in, first-out” experience with the initial wave of COVID put its economy on a different timetable than most others. China is emerging from a slowdown, and its government is spending and cutting interest rates to encourage economic recovery. Zhao believes that low inflation provides China’s policymakers more flexibility than those elsewhere to stimulate the economy with monetary and fiscal policy.

Valuations suggest that investors are maintaining low expectations and underestimating the prospects of intermediate-term incremental improvement...

That commitment to stimulating growth creates opportunities to invest in Chinese companies during the early stage of an expansion, which is often a good time for stocks. The government’s decision to end its policy of trying to control COVID through mass quarantines and economic shutdowns may also reduce risks for investors that China’s recovery could stall.

As China’s economy recovers and grows more sophisticated, Sam Polyak, manager of FidelityÂ® Series Emerging Markets Opportunities Fund (FEMSX), sees opportunities in disruptive and innovative companies there. He especially favors China-listed firms that are challenging well-known premium international brands. These companies include homegrown brands such as athletic wear maker Li-Ning, which competes with Nike and Adidas, as well as companies such as appliance maker Haier that have purchased familiar US brands, such as that of General Electric household appliances.

Some of China’s high-tech disruptors face disruption of their own in 2023, however. Zhao expects large, internet-focused companies to face short-term challenges from heightened regulation. Still, he says, “I continue to be bullish on the outlook of China over the medium to long run.”

While history and currency may both be on the side of international stocks, the future is not the past and the international order may operate differently in this new era. Seemingly settled assumptions about transnational supply chains; the free movement of goods, people, and capital; trade policy; and international law are all still evolving in ways that may have implications for investors. As new realities force changes to old assumptions, investment managers with strong fundamental research capabilities may be able to spot opportunities in the shifting landscape.