Global Dividends Break New Record in 2017, With More to Come for the Year Ahead

\DENVER and LONDON, Feb. 19, 2018 /PRNewswire/ — A strengthening world economy and rising corporate confidence pushed global dividends to a new high in 2017, according to the Janus Henderson Global Dividend Index. Global dividends rose 7.7% on a headline basis, the fastest rate of growth since 2014, and reached a total of $1.252 trillion. Every region of the world and almost every industry saw an increase. Moreover, records were broken in 11 of the index’s 41 countries, among them the United States, Japan, Switzerland, Hong Kong, Taiwan and the Netherlands.

Underlying growth was 6.8%, and every region of the world saw an increase

JHGDI rose to a record 171.2, meaning dividends have risen by almost three-quarters since 2009

Q4 continued the positive trend, up 6.4% on an underlying basis

Underlying growth, which adjusts for movements in exchange rates, one-off special dividends and other factors, was an impressive 6.8%, and showed less divergence than in previous years across the different regions of the world, reflecting the broadly based global economic recovery.

The United States has been the key driver of global dividend growth in recent years. After a sluggish 2016, growth picked up markedly in 2017, reaching 5.9% on a headline basis, and 6.3% at the undeÂ­Â­rlying level. U.S. companies paid their shareholders a record $438.1 billion. Even so, its performance was a touch below the world average, as other regions accelerated rapidly.

2017 was also a record year for Asia Pacific ex Japan. The total paid jumped 18.8% to $139.9 billion, boosted by exceptionally large special dividends in Hong Kong, the largest from China Mobile. Hong Kong, Taiwan and South Korea all individually broke annual records, too. Underlying growth for the region was impressive at 8.6%, led by Taiwan and South Korea, which both saw double-digit increases. Australia also saw strong underlying growth of 9.7%.

Japan joined the record-breakers, with growth of 11.8% on an underlying basis, after accounting for the weaker yen. Every Japanese sector, and most companies, showed growth in yen terms. Dividends in emerging markets also grew strongly, though they remain a long way below their 2013 peak. Russia saw dramatic growth, while China, which had seen lower payouts two years in a row, avoided a third consecutive disappointment in 2017.

Europe lagged behind other regions, with underlying growth of only 2.7%. In total European companies distributed $227.4 billion, a disappointing increase of 1.9% in headline terms. A poor fourth quarter, influenced by cuts from a handful of large companies in France and Spain, a weak euro during the crucial second quarter when most European dividends are paid, and lower special dividends explain why Europe lagged behind its global peers. For the year overall, France barely grew at all in underlying terms, after an excellent 2016. Germany, by contrast, rebounded in 2017, and numbered among the faster growing nations, along with Austria, Portugal, Belgium, the Netherlands and Switzerland. The Netherlands and Switzerland even reached new record highs. Spain, by contrast, saw the third consecutive year of declines.

In the UK, headline growth was held back by the weak pound, but underlying growth was 10.0% as UK-listed multinational mining companies rapidly restored dividends that had been cut or cancelled in the lean years for commodity prices.

Janus Henderson forecasts underlying growth for 2018 of 6.1%, with expansion continuing from every region of the world. If the dollar maintains its lower level against other currencies, the 2018 total should benefit from payments translating to dollars at more favourable exchange rates. That will help push headline growth to 7.7% again, yielding a new record total of $1.348 trillion. 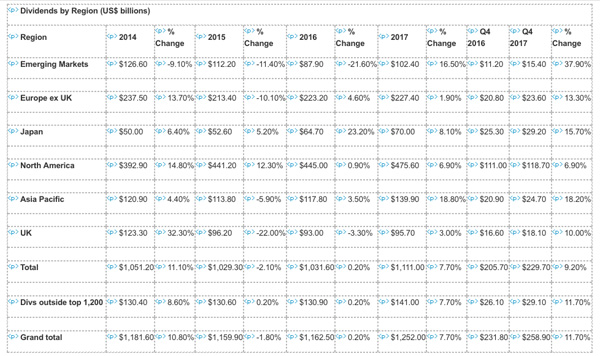 Ben Lofthouse, Director of Global Equity Income at Janus Henderson said: “While equity markets have been volatile recently, dividend payments are reflective of corporate health and economic conditions, so we expect them to be more stable. 2017 was a great year for income investors with dividend growth broadly spread across countries and industries. All three of the largest economies in the world, the U.S., the EU and China, are now expanding at the same time. As a result, companies are seeing rising profits, and healthy cash flows, and that’s enabling them to fund generous dividends. The record payout last year was almost three-quarters higher than in 2009, and there is more to come. The next few months are set fair, and we expect global dividends to break new records in 2018.”

Each year Janus Henderson analyses dividends paid by the 1,200 largest firms by market capitalisation (as at 31/12 before the start of each year). Dividends are included in the model on the date they are paid. Dividends are calculated gross, using the share count prevailing on the pay-date (this is an approximation because companies in practice fix the exchange rate a little before the pay date), and converted to USD using the prevailing exchange rate. Where a scrip dividend is offered, investors are assumed to opt 100% for cash. This will slightly overstate the cash paid out, but we believe this is the most proactive approach to treat scrip dividends. In most markets it makes no material difference, though in some, particularly in European markets, the effect is greater. Spain is a particular case in point. The model takes no account of free floats since it is aiming to capture the dividend-paying capacity of the world’s largest listed companies, without regard for their shareholder base. We have estimated dividends for stocks outside the top 1,200 using the average value of these payments compared to the large-cap dividends over the five-year period (sourced from quoted yield data). This means they are estimated at a fixed proportion of 12.7% of total global dividends from the top 1,200, and therefore in our model grow at the same rate. This means we do not need to make unsubstantiated assumptions about the rate of growth of these smaller company dividends. All raw data was provided by Exchange Data International with analysis conducted by Janus Henderson Investors.