Giving Yourself Permission to Succeed

Are self-limiting routines and beliefs holding you back from attaining your goals? 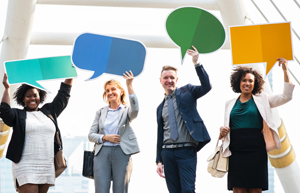 Ms.Bateman is a widely-recognized speaker, coach, and author of, Speak Up! Be Heard! Finding My Voice. Drawing upon her own experiences at crafting, honing, and delivering presentations, Sarah aids entrepreneurs and businesspeople to develop a focused message which is relatable, memorable, and succinct. A longstanding member of Toastmasters International, Sarah holds the Distinguished Toastmaster Designation. For more information about Sarah Bateman, please visit: www.SpeakUp-BeHeard.com.

Joan was sitting at a round table when a hand descended over her right shoulder and slapped a piece of paper down on the wooden surface. A permission slip lay before her. Joan wondered, âWhy do I need a permission slip?â She glanced up at her colleague, Cheryl, who said, âItâs a permission slip. Youâve been thinking about honing your presentation skills for decades. Why havenât you?â

âWhy hadnât I?â Joan thought. She was right. It was her choice to dream but never act. It was her choice to exist but never take the risks to improve her life. Joan was expected to give presentations at work. Her presentation style was somewhat lackingâshe sometimes appeared nervous, and it was obvious to others that it wasnât an area in which she was particularly confident.

Joan noticed that her self-limiting routines and beliefs were affecting both her personal and professional life. She had to remember that her presence was significant and she began creating her own permission slips to succeed.

Do you feel uncomfortable placing yourself in unfamiliar situations? Have you avoided seeking new responsibilities at work because you didnât want to look foolish? Research shows that it is important to become perpetual beginners. This is especially true as we age. Learning new skills makes you more flexible and ready to compete in this chaotic world. Successful working professionals are willing to become a beginner over and over again. They are willing to let go of being the expert.

There are strategies which can help you undertake new challenges. One is to break your routine. Do you find yourself on autopilot often? Are your days carbon copies of each other? Set the intention to try something new. You might speak up more in a meeting, or seek new functionalities at work. Find a friend or coworker to support you.

Permission to be seen and heard

Joanâs second permission slip to becoming successful and significant was letting herself be heard and seen. She was practically non-existent during her early years at the office. Her first presentation was a moment of silenceâshe literally could not speak. Her struggles with connecting at work or in networking situations were drastically impacting her professional life. She needed to give herself the permission slip to speak up, and speak with confidence.

How would being seen and heard change your business life?. Would you gain more respect from those around you? Would you be able to build trust and relationships? If you are not seen and heard, you are not knownâand opportunities and promotions will pass you by because you donât stick out in peopleâs minds.

Deciding to be seen and heard can take courage. One way to begin is to set your intention before you attend a meeting or meet a client. Know what you want to contribute. Know what ideas you would like to share. In a meeting make sure you speak up early. The longer you wait to speak the harder it will be. Make eye contact with others in the room and use open body language. Be sure you are not creating a barrier between yourself and anyone else in the room. Remember: you want to be accessible at this time. Celebrate your victories so the next time it will be easier for you to speak up.

Permission to say no

Joanâs third permission slip to becoming successful and significant was learning to say no. In the office she was very accommodating.âthe supervisors loved her. Basically she never said no. They got into the habit of bringing her rush files, just before 5:00 PM. They would drop them at her desk and head home. Joan learned how important it was to shorten her yes list. Do you have too many Yeses in your life?

Have your forgotten the benefits of saying no? Learning to say no when appropriate gives you more control over your life so you donât overextend yourself. It is a way of learning to respect yourself which will lead to others respecting you as well. Saying no gives you more time to yourself which is a precious commodity in todayâs chaotic world. You will have more energy and time so when opportunities appear you will be available to take them. When you have time to yourself you have time to determine your priorities and make better decisions which cut down on daily stress.

Before saying yes ask yourself these following questions:

If you decide to say no to someone, let them know as quickly as possible so they can made other plans. Maybe you can help the other person out by suggesting an alternative.

What arenât you giving yourself permission to do?

What are the dreams which have escaped you until now? Since Joan began following her three permission slips she began enjoying her work life more. By allowing herself to make mistakes she felt less pressure to be perfect. She gained the confidence to learn new skills which made her more valuable to the team. When she began speaking up at meetings she learned that she had good ideas to contribute. She was more valued by the team. When Joan said no to excess, unexpected work she was able to focus on her responsibilities. If youâre struggling like Joan was, write yourself her three permission slips. They will better your work life, and make you a more valuable contributor to the team.