Game On: Welcome to the Tax Party

There are two simple questions: How much will this costâ¦ and who pays? 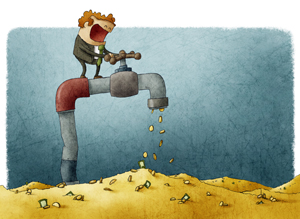 Mr. LaBrecque is a regular contributor to this magazine. He is Managing Partner and CEO, LJPR Financial Advisors, and Director, Michigan Association of CPAs. Visit ljpr.com

President Trump announced his hyped-up tax cut proposal with less clarity than the previous plan. However, this development signals the start of a process toward tax changes.

The presidentâs proposals are virtually certain to be challenged and likely changed. If the president thought the Health Care Bill was complicated, wait until he gets into the Internal Revenue Code (the domestic portion of federal statutory tax law in the U.S.). The big question is: How much is all of this going to cost and who pays?

The tax law proposal can be carved into four pieces: international, business, individual and estate. There are far-reaching concepts in each area. We might consider that tax law, although complex, can be changed dramatically:

Here the big issue is territorial versus worldwide taxation. The U.S. currently has a worldwide tax system. U.S. corporations are taxed at up to 35 percent, irrespective of the origin of the profits, less foreign taxes paid. The cash tax cost only applies to profits that are repatriated to the U.S. What this effectively does is encourage corporations to leave or park the money in lower tax jurisdictions. There is a significant amount of deferred taxes offshore, as much as $2.4 trillion. A territorial system taxes profits made in the U.S., and not profits made abroad. At the beginning, President Trump signaled support for the worldwide system. More recently, he appears to have partially sided with the GOP (the Republican Party) on a territorial system.

There is a clear movement on both sides of the aisle to repatriate the offshore profits. President Trump earlier signaled a 10 percent repatriation tax, paid over time, but his latest proposal is less clear. Business is generally supportive of the territorial system. Itâs illustrative that Burger King merged with Tim Hortonâs to have Canadian taxes imposed instead of U.S. taxes. When âtax havenâ and âCanadaâ are used in the same sentence something is wrong.

The president has stuck to his original plan of a 15 percent corporate tax, down from 35 percent. According to the Tax Foundation, the U.S. has the third highest marginal corporate tax rate in the world. The worldwide average is 22.5 percent. The U.S. rate is the highest of the 35 countries of the OECD (which stands for the Organization for Economic Cooperation and Development, a unique forum where the governments of 34 democracies with market economies work with each other, as well as with more than 70 non-member economies to promote economic growth, prosperity, and sustainable development).

The rationale is to make U.S. businesses more competitive by making the U.S. a more attractive place to do business. The GOP has a 20 percent maximum corporate rate in its Blueprint (the Republican Partyâs detailed tax code plan). A 20 percent rate would put the U.S. at the bottom of rates of the G20 (an international forum for the governments and central bank governors from 20 major economies) countries, according to the Congressional Budget Office. During the campaign, the president suggested removing corporate loopholes like credits and extra deductions. Depending on the proposal you read, he offered either a deduction for capital expenditures for manufacturing companies or a deduction for interest expense. The Research & Development Credit would be retained. Corporate AMT is eliminated.

A very interesting part of the presidentâs proposal is the application of the 15 percent corporate rate to pass-through entities, like subchapter-S corporations and LLCs. This will have an interesting and substantial effect on many small business, who will be incented to leave funds in their businesses, and be taxed at 15 percent versus the 35 percent proposed maximum individual rate. We will likely see a lot of changes to how funds are retained in pass-through. The GOP Blueprint proposes a 25 percent tax on pass-throughs. Both sides have suggested there is a need for anti-abuse rules.

Lots of change here, starting with the âpostcardâ return, that is simple enough to have most individuals be able do their taxes on a 6 x 9 post card. Hereâs a snapshot of individual changes:

many small business... will be incented to leave funds in their businesses, and be taxed at 15 percent versus the 35 percent proposed maximum individual rate

Trump was for repeal, then added a Canadian-type capital gain tax on appreciated assets transferred in death. Gift tax is not mentioned (so we conclude it stays). GOP Blueprint is outright repeal and the most recent position by the Administration is for repeal.

The major question is how much does this cost and who pays? The main argument by proponents of the tax cuts is that there will be GDP growth that will offset the costs. Cost estimates, which are murky for now, are between $2 and $7 trillion over 10 years. This is compounded by static and dynamic scoring. Some numbers out there:

Do tax cuts create economic growth? The short answer appears to be yes, with qualification. A key factor appears to be competition. Cutting business taxes to make a jurisdiction more competitive appears to work as a business attractor and retention tool, so the business tax cuts would likely provide growth. Individual income tax cuts seem to work better on lower income people than upper income, despite the supply-side argument. Repatriation sounds like a great game, but a prior repatriation holiday in 2004 (the American Jobs Creation Act of 2004) had limited (or even negative) results. Removing the estate tax will benefit the families of about 0.2 percent of Americans (with assets generally over $11 million).

Who are the possible winner and losers?

Itâs way down the road, and thereâs a whole process of politics* to deal with, but if the presidentâs proposal passed, hereâs who might win or lose:

Bottom Line: The game is on. Pay close attention. Heath care reform is and was complex, but tax reform is enormously complex. And it really matters.

*Now that weâve discussed the nuances of the presidentâs proposal, we should look at the process of a tax law. All revenue bills must originate in the House of Representatives: 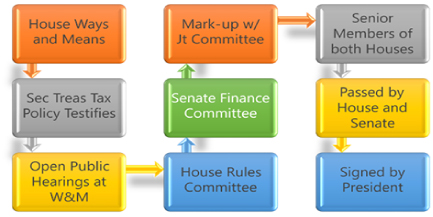 Bills start in Ways and Means, move through hearings, go onto the Senate Finance Committee, and are then marked up by the Joint Committee on Taxation. From there, both houses vote and the bill moves on to the president.

Reconciliation and the Byrd rule require a budget bill to be revenue neutral over a 10-year period and also expire (âsunsetâ) in 10 years. Hence the alleged âfiscal cliffâ on the expiration of the Bush Tax Cuts. If tax reform is passed under reconciliation, it will have a 10-year shelf life.