But the gig economy has a dark side… 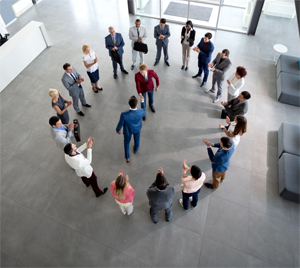 February 06, 2019 —Â OMAHA, Neb.–(BUSINESS WIRE)–The new American dream is the ability to be your own boss, with the freedom to work whenever and wherever you want, according to a new survey conducted by The Harris Poll on behalf of TD Ameritrade. Six in 10 Americans (60 percent) said freelancing is the modern version of the American dream. While that number was highest among those who have already joined the on-demand workforce (71 percent), more than half (57 percent) of traditional workers agreed.

âWith more than 16.5 million people in the U.S. working in ‘contingent’ or ‘alternative work arrangements,’1 weâre seeing an enormous shift in the way people spend their working lives,â said Christine Russell, senior manager of retirement and annuities at TD Ameritrade. âWhile some see drawbacks, a lot of people put a premium on the increased freedom and flexibility this evolution is enabling. And however they feel about it, thereâs widespread agreement that freelancing is the future of work.â

Work is getting reworked

The workplace landscape is shifting. Employees have lost trust in employers, leading many to become more like the âCEO of oneâ â responsible for their own income, and retirement.

Full-time freelancers report being happier than traditional workers
Those who do decide to take the plunge and join the on-demand workforce full-time report a higher quality of life, experiencing higher levels of happiness and lower levels of stress.

Side hustlers are bridging the gap
Unlike full-time freelancers, whose primary reason for joining the on-demand workforce was to pursue their dreams (47 percent), side hustlers (those with a traditional job and a freelance gig on the side) are primarily driven by financial needs (52 percent). Most begin side hustling for financial reasons, including paying off debt (44 percent), saving for major purchases (42 percent), meeting current spending needs (38 percent), increasing their nest egg (36 percent), and saving for retirement (32 percent).

Millennials value flexibility
Millennials are especially likely to choose freelancing flexibility over traditional corporate employment: 52 percent of millennials would rather work 80 hours a week freelancing for 20 years than work a nine-to-five corporate job for 40 years, and 76 percent expect to have a side hustle at some point in their life. Forty-eight percent of millennials would ideally have both freelance and traditional work, while just 24 percent want to freelance full-time.

While many people are excited by the opportunity to be their own boss and chart a unique career path, others see a dark side with a lifestyle that is unsustainable and leaves them (and/or others) at risk financially.

The workplace landscape is shifting. Employees have lost trust in employers, leading many to become more like the âCEO of oneâ â responsible for their own income, and retirement...

âWhile being your own boss can give you the freedom to be more flexible with your hours, that freedom also extends into how you build your financial future,â explained Russell. âUnlike their traditional counterparts, on-demand workers probably donât receive friendly emails from their HR department reminding them to take advantage of the company retirement benefits â which is why itâs important to be proactive and learn about various tools available for the on-demand workforce.â

Russell highlights some of the tools available to the on-demand workers:

Roth Individual Retirement Account (IRA) can be one approach for planning retirement. When itâs time to withdraw, there is no need to pay any taxes on the earnings, because theyâre paid upfront. The 2019 contribution limit is $6,000 or $7,000 for those who are 50 or older. While there are income limits on who can contribute, anyone can convert existing IRA or 401(k) assets to Roth.

Simplified Employee Pension (SEP) allows one to contribute and deduct 25 percent of their freelance/gig income up to $56,000 for the 2019 tax year. With SEP, itâs possible to change the percentage of contributions every year, skip years or even contribute once and never repeat it again.

Note that these are not the only tools available to on-demand workers. Be sure to consult with a qualified tax-planning professional with regard to your personal circumstances before making a decision. TD Ameritrade does not provide tax advice. 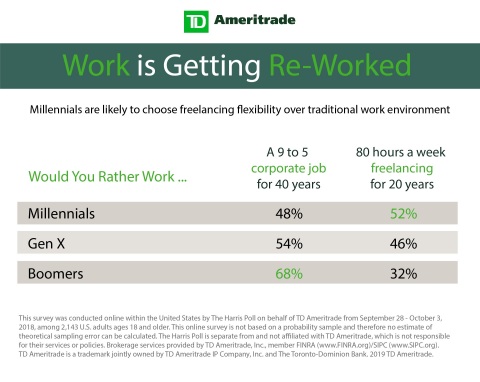 About TD Ameritrade Holding Corporation
TD Ameritrade provides investing services and education to more than 11 million client accounts totaling approximately $1.2 trillion in assets, and custodial services to more than 7,000 registered investment advisors. We are a leader in U.S. retail trading, executing an average of approximately 900,000 trades per day for our clients, more than a quarter of which come from mobile devices. We have a proud history of innovation, dating back to our start in 1975, and today our team of 10,000-strong is committed to carrying it forward. Together, we are leveraging the latest in cutting edge technologies and one-on-one client care to transform lives, and investing, for the better. Learn more by visiting TD Ameritradeâs newsroom at www.amtd.com, or read our stories at Fresh Accounts.

About The Harris Poll
The Harris Poll is one of the longest-running surveys in the U.S., tracking public opinion, motivations and social sentiment since 1963. It is now part of Harris Insights & Analytics, a global consulting and market research firm that strives to reveal the authentic values of modern society to inspire leaders to create a better tomorrow. We work with clients in three primary areas; building twenty-first-century corporate reputation, crafting brand strategy and performance tracking, and earning organic media through public relations research. Our mission is to provide insights and advisory to help leaders make the best decisions possible. The Harris Poll is separate from and not affiliated with TD Ameritrade, which is not responsible for their services or policies.

Survey Methodology
This survey was conducted online within the United States by The Harris Poll on behalf of TD Ameritrade from September 28 – October 3, 2018, among 2,143 U.S. adults ages 18 and older. Key populations include: 438 on-demand workers (220 full-time freelancers and 218 side hustlers) and 975 traditional workers. The remaining sample pool consists of part-time workers, students and retirees.