Our financial decisions are influenced by friendsâ social media feeds 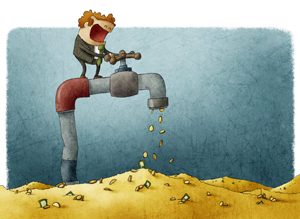 May 13, 2019 — SAN FRANCISCO–(BUSINESS WIRE)–More than a third of Americans admit their spending habits have been influenced by images and experiences shared by their friends on social media and confess they spend more than they can afford to avoid missing out on the fun, according to Schwabâs 2019 Modern Wealth Survey, an annual examination of how 1,000 Americans think about saving, spending, investing and wealth.

Survey respondents place blame on social media platforms and not peopleâthey rank social media as the biggest âbadâ influence when it comes to how they manage their money, while they put friends and family at the top of âgoodâ influences.

According to the survey, three in five Americans pay more attention to how their friends spend compared to how they save, with an equal number saying theyâre at a loss to understand how their friends are able to afford the expensive vacations and trendy restaurant meals they portray on social media.

Left Out Of Our Friends’ Experiences…

The pressure to spend as a result of social media envy and the desire to not be left out of friendsâ experiences is particularly acute among Generation Z and millennials, the survey found:

Keeping Up With The Jones’

âThe burden to âkeep up with the Jonesesâ has been part of our culture for decades, but it appears that social media and the fear of missing out (FOMO) have increased the pressure to spend,â said Terri Kallsen, executive vice president and head of Schwab Investor Services. âSpending is not the enemy, but when we allow social pressure or other forces to lure us into spending beyond our means, it can impact long-term financial stability and become a larger problem.â

Despite the financial pressures lurking in their social media feeds, 59 percent of Americans consider themselves to be savers, and 65 percent say theyâre willing to sacrifice spending money on experiences now to save money for later in life.

However, a significant number of Americans are still struggling to save:

For those looking for a way to stay the course, Schwabâs survey shows that more than 60 percent of Americans who have a written financial plan feel financially stable, while only a third of those without a plan feel that same level of comfort. Those with a plan also maintain healthier money habits when it comes to saving:

Despite the benefits of planning, Schwabâs survey shows that only 28 percent of Americans have a financial plan in writing. And among those without one, nearly half (46 percent) say itâs because they donât think they have enough money to merit a formal plan, 18 percent say itâs too complicated, and 13 percent say they donât have enough time to develop one.

âWe want to change the perception that financial planning is inaccessible, too expensive and too complicated,â said Kallsen. âMost people have short-term and long-term goals, either in their heads or documented informally. We can help capture those ideas and create a plan to achieve them. Itâs that simple.â

If I had a Million Dollars (Would I be Rich?)

According to the survey, Americans believe it takes an average $2.3 million in personal net worth to be considered âwealthy.â Thatâs more than 20 times the actual median net worth of U.S. households, according to the Federal Reserveâs Survey of Consumer Finances released in 2017.

More than half of Americans are optimistic that they will be wealthy at some point in their lives, and two in five believe they will achieve that goal within a decade. Eight percent say they already consider themselves wealthy, although their numerical definition of wealth is lowerâthey believe they achieved wealth at almost $700,000 in net worth.

Despite the high dollar amounts Americans use to define wealth, when it comes to feeling personally wealthy, 72 percent say it isnât about a dollar amount at all, but rather the way they live their lives.

We want to change the perception that financial planning is inaccessible, too expensive and too complicated...

When asked what they would do with a sudden $1 million windfall, more than half (54 percent) of survey respondents say they would spend itâon a house first, followed by cars and travel. In addition, they say they would use the funds to pay down debt (28 percent), invest (23 percent) and save (21 percent). In comparison to other generations, Gen Z respondents were the most likely to say they would save at least a portion (37 percent).

Schwab has created a Modern Wealth Quiz to help people gain insights about their own saving, spending, and investing habits. The brief, multiple-choice questionnaire is available at www.schwab.com/MyModernWealth.

About the Modern Wealth Survey

The online survey was conducted by Logica Research from February 8 to February 14, 2019, among a national sample of 1,000 Americans aged 21 to 75 and an augment sample of 200 older Gen Zers aged 18-22 for generational comparisons. Quotas were set to balance the national sample on key demographic variables. Supporting documentation for any claims or statistical information is available upon request. The margin of error for the national sample is three percentage points.

At Charles Schwab, we believe in the power of investing to help individuals create a better tomorrow. We have a history of challenging the status quo in our industry, innovating in ways that benefit investors and the advisors and employers who serve them, and championing our clientsâ goals with passion and integrity. More information is available at www.aboutschwab.com. Follow us on Twitter, Facebook, YouTube and LinkedIn.